#InCaseYouMissedIt: Lucky No. 7 for Leme, No Days Off for Campbell and More 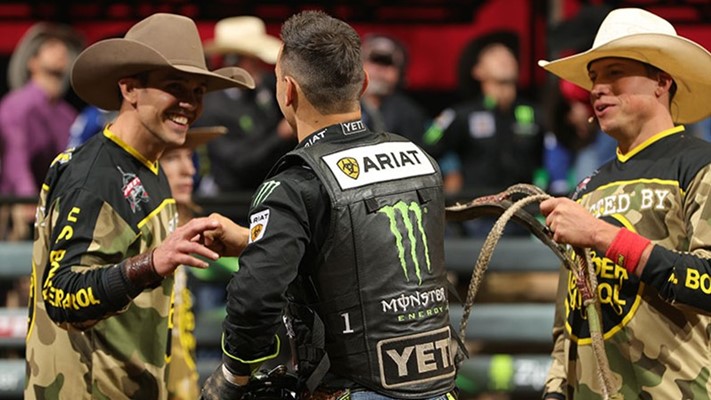 COLORADO SPRINGS, Colo. – Stop us if you’ve heard this before: Jose Vitor Leme won the premier series event this past weekend. (Did we change the lede from last week? No. It’s an evergreen statement at this point.) Plus, Kaique Pacheco on his mindset amidst the world title race, what has Fernando Henrique Novais riding so well and what’s going on with Leme’s groin injury. Miss a moment of the action this weekend? Here’s what happened around the PBR.

Another weekend, another win for world No. 1 and reigning World Champion Jose Vitor Leme in Newark. It was his seventh of the season, putting him just one win away from tying the record for most wins in a season. He also tied the record for round wins in a season and earned an unprecedented 21st 90-point ride this season, naturally.

However, all was not well for Leme, as he’ll undergo an MRI this week to determine the severity of his groin injury.

As for Leme’s challengers in the world title race, No. 3 Cooper Davis won Round 1 in Newark…

…while No. 2 Kaique Pacheco is relying on his biggest strength: his mental toughness.

Boudreaux Campbell is pulling double duty – and taking no days off – as he attempts to qualify for both the PBR World Finals and the Wrangler National Finals Rodeo for the second consecutive season.

Fernando Henrique Novais went 3-for-3 to finish a career-best second overall in Newark and credits 2008 World Champion Guilherme Marchi with helping him get there.

Rookie of the Year contender Chase Dougherty may have a torn ligament in his riding elbow, but you won’t catch that stopping him.

Alex Cardozo went 2-for-2 to win the inaugural PBR Buckin’ at the Rock.

Check out the best photos from day one and day two in Newark.

If the three-time World Champion tells you to do something, you listen!