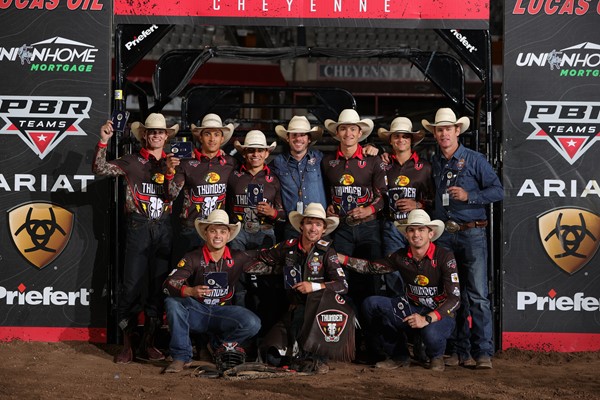 AIRDRIE, Alta. – Callum Miller was signed as a free agent to the Missouri Thunder earlier this year, and now that the dust has settled on the first ever PBR Team Series event in Cheyenne Wyoming, he is a member of the first-ever winning team.

Now that the season is underway, Miller is carrying a new level of confidence into every event he rides at.

This past Saturday in Lacombe, Alberta, only days removed from the Cheyenne win, he rode Vold Rodeo’s Lil Hooch to an 88-point score which was enough to emerge the champion at the two-round PBR Canada Touring Pro Division event.

“Going to get on the best bulls in the world in the states, it puts the confidence in you for when you come back,” Miller said. “That confidence is back though, coming home and getting Lil Hooch rode and winning Lacombe.”

A bull rider’s list of priorities is different with every ride.

Some focus on rodeo, some aim to the PBR World Finals, or a national title in one of the five countries the PBR operates. However, for Miller, the Team Series Championship is top of mind, with the PBR Canada Finals, and a PBR Canada Championship right next to it.

“Definitely put a spanner in the works for traveling, and planning out rodeos and things for the year,” Miller explained. “But it's been good because now I can focus just on the PBR side of things. The travelling doesn’t worry me at all, I have been enjoying going to both places.”

“PBR Canada Finals is right up there on the list,” Miller added on his goals in 2022. “The goal for this year is to win the Team Championship, and come back the weekend after and win a Canadian title.”

What it is going to take to achieve the feat of being a member of the first-ever PBR Team Series Champions, as well as nabbing a PBR Canada Championship is consistency according to the Aussie.

“Consistency. Being consistent, consistently working out and staying in the best shape.”

“You’re not hammering your body with these team events. If you need a little bit of a break because you are sored up, you can get that break for a day here or there. Then come back up here and pick and choose for the big events to get those points.”

“Feeling good is going to be key to winning both those titles,” Miller said.

Alongside consistency is confidence.

Miller says that the biggest lesson he has learned from his time with the Missouri Thunder under the tutelage of Head Coach Ross Coleman has been confidence.

“The team deal itself, the concept of it is an unreal idea. Matching us up with bulls that fit our riding style is great, it’s going to increase riding percentages.”

“In theory there should be a whole lot more bull rides at these events,” Miller continued. “Our team itself, I believe is amazing. We have a great group of guys, the camaraderie and mate ship is second to none. I think it's better than all the other teams, but that is my bias.”

“The team aspect of it brings a different feel to each event,” Miller continued. “You get on and you've got five or six other guys cheering you on right behind you, and you are getting on for those five or six other guys. It makes you try that little extra 20% harder on everything. You are riding at 120.”

“It is about having the confidence to back yourself because you have those five guys backing you, and it does a lot for the confidence. It has taught me to really believe in myself. Back yourself, show up and show out.”

The Missouri Thunder’s roster also includes Colten Fritzlan, Clayton Sellars, Cody Teel, Andrew Alvidrez, Jesse Petri, Adriano Salgado, Leandro Machado, Luke Parkinson and Marcelo Procopio Pereira, and while there is an immense amount of talent and experience on the team with Miller, he admits they are viewed as a bit of the underdogs during the inaugural PBR Team Series season.

“We are a bit of a different team than everyone else,” Miller explained. “Everyone else is doing team workouts and things like that. We are all about being cowboy and putting out that try. We all workout individually at home, but when we are at the team events we are bonding and operating really well as a group.”

“I think we come in as the underdog as a team, we have a fair few of younger guys on our team. We all click together though, and that is what makes the win even more special. We are all good buddies, we all back each other and we all put out the effort.”

Miller will be continuing his work with the Missouri Thunder, but before heading back south for the next event will be competing in Magrath and Coronation, Alberta August 4 and 5, looking to lock himself into a PBR Canada Finals berth, currently sitting No. 17 in the national standings after his win in Lacombe, Alberta.