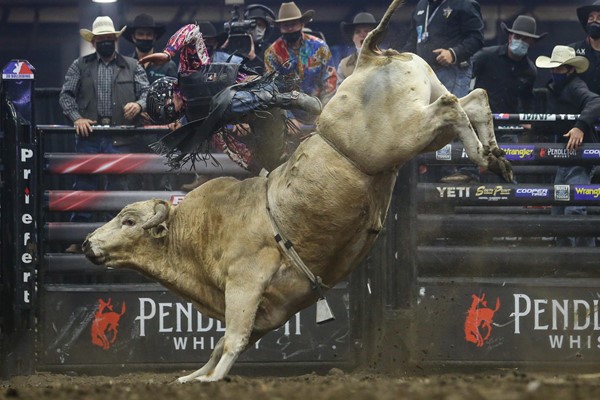 New to the roster, Eno Bucking Bulls' Gaume Farms Stickin "n" Movin finished the season No. 2 in the Bull of the Year race. Photo: Covy Moore/CovyMoore.com.

NEW YORK CITY – It is without question, that some of the rankest bulls in the PBR have emerged from Canada, and that was on full display in 2021.

Not only did four bovine athletes from the nation earn the nod to buck at the prestigious PBR World Finals, but Happy Camper made history, becoming the first bull to earn the PBR Canada Bull of the Year honor twice.

While we’ve already highlighted those bovines who delivered the Top 5 scores of the season, today we celebrate the bull’s that finished the 2021 season ranked inside the Top 5 of the national standings.

After making two appearances in PBR competition in 2020, Norse God rose to the top of the pen in 2021, bucking eight times and concluding the season with a 44.25-point average. Following three mediocre performances to start the season, the Wild Hoggs Bucking Bulls’ standout hit his stride in early September, marked then a career-best 44 points when he was covered by Dakota Buttar for a monstrous 90 points. Following yet another 44-point trip with Buttar, this time in late October in Calgary resulting in an 89.5-point score, Norse God delivered a career-best effort at the final regular-season Cup Series event of the year in Saskatoon, Saskatchewan. Matching up with young gun Dawson Shannon, Norse God dispatched him in a swift 2.19 seconds to earn a 45-point score.

Norse God capped his season with his first selection to buck at the PBR Canada National Finals. Going head-to-head with Todd Chotowetz, the animal athlete ended the year with his second consecutive buckoff, bringing Chotowetz down in 2.44 seconds en route to his third 44-point score of the season.

A new face to the PBR Canada circuit in 2021, Lil’ Hooch quickly established himself as a fierce contender in the Flying High Rodeo Co. pen. Lil’ Hooch made his career debut in statement fashion, bucking off Ashton Sahli in 1.95 seconds en route to a 44.5-point score. And the bull only improved in his following trips. In his very next out, Lil’ Hooch faced off against Australian standout Callum Miller. Again proving the more dominant athlete, Lil’ Hooch brough Miller down in 5.68 seconds to earn a career-best 45-point score.

After surrendering three qualified rides in his subsequent outs, Lil’ Hooch capped his rookie season with back-to-back buckoffs. In his 5/5 Bucking Battle debut in Saskatoon in late October, Lil’ Hooch bested Shannon in 2.42 seconds to earn a 43.5-point score, and then posted a 44-point score in his first-ever out at the PBR Canada National Finals, bucking off Tim Lipsett in 4.99 seconds.

For his efforts, Lil’ Hooch concluded 2021 tied for the No. 4 ranking in the national standings, with a 44.25-point average, having bucked off 57.14% of his rider opponents.

Hailing from the talented pen of Skori Bucking Bulls, Hanna Motors Winston Bruce was one of the most consistent bulls on the PBR Canada circuit in 2021. After bucking once in 2020, Winston Bruce appeared at nearly every event in 2021, registering 12 outs and surrendering just one qualified ride.

In late August, Griffin Smeltzer became the first rider to reach the requisite 8 aboard Winston Bruce. Marked an overall 87.5 points, Winston Bruce was awarded a 43.5-point bull score. The qualified ride was the start of a dominant second half for the young bull. In his very next out, Winston Bruce was marked then a career-best 44 points for his 3.93 seconds of work against Logan Biever in Marwayne, Alberta. Only improving, following a 44.5-point effort in late August in Lethbridge, Alberta, Winston Bruce bucked to a career-best 45-point score in late September in Prince Albert, Saskatchewan after upending Coy Robbins in 4.47 seconds.

In 2021, Unkle Kranky took the PBR world by storm. Not only did his eight outs on Canadian soil during the regular season earn him a berth to the PBR World Finals, but they also led him to being a front-runner for the PBR Canada Bull of the Year honor. The Vold Rodeo bucker made his PBR debut in early July in Cluny, Alberta, besting Cooper Zur in 2.43 seconds to earn a 42.5-point bull score. However, his subsequent two trips, both of which were made with Smeltzer aboard, proved why Unkle Kranky would be a force in the Bull of the Year race.

After posting a 44-point score for his 4.25 seconds of work against the 22-year-old in Magrath, Unkle Kranky was marked 45 points when he bested the Albertan again in Stavely, Alberta, in late August, this time in a hard-fought 7.53 seconds.  Unkle Kranky then made his elite Cup Series debut the next weekend in Lethbridge, surrendering his first qualified ride when Miller covered him for 89 points.

Following the trip, however, Unkle Kranky delivered what remains his career-best out at the Touring Pro Division event in Calgary, Alberta. Bucking off Smeltzer in 3.87 seconds, Unkle Kranky was marked an impressive 45.5 points. As the season wound to a close, Unkle Kranky was selected by PBR Livestock Director Cody Lambert to buck at the PBR World Finals. Marking the first time the bovine athlete bucked stateside, Unkle Kranky made his debut in Las Vegas during Round 3 of the event when he bucked off Claudio Montanha Jr. in 2.69 seconds to earn a 43.25-point bull score. Unkle Kranky concluded his second with his first out at the PBR Canada National Finals, marked 43 points for his 4.09-second trip with Jake Gardner.

Hailing from the Eno Bucking Bulls firm, Gaume Farms Stickin “n” Movin was a fierce contender for the Bull of the Year honor in his rookie season. Delivering six outs on Canadian soil, three were marked 45 points or more, and the animal athlete was never ridden to the requisite 8 seconds. As a result of his dominance, Stickin “n” Movin concluded the year with a 44.875-point average, finishing No. 2 to the eventual champion by a mere 0.125 points.

Stickin “n” Movin made his PBR debut in mid-August at the Touring Pro Division event in Coronation, Alberta. While he bucked off Tyler Craig in 1.62 seconds, the bull’s resulting 42.5-point score would prove to be his lowest of the season. The Alberta bovine returned to the draw in early September, registering two outs at the trio of Touring Pro Division events held in Calgary, Alberta. In his second career out, Stickin “n” Movin was marked a career-best 45.5 points for his 3 seconds of work against Robbins. The next day, the animal athlete was marked 45 points, this time for his 5.97-second buckoff of now two-time PBR Canada Champion Cody Coverchuk. Following an out in Medicine Hat, Alberta, in mid-October, Stickin “n” Movin capped the regular season with a 45-point effort in Saskatoon when he again bested Craig, this time in 3.1 seconds.

While Stickin “n” Movin was marked a formidable 44 points at the PBR Canada National Finals for his 3.19 second of work against Lonnie West.

In 2021, Happy Camper made history. Concluding the season with an unmatched 45-point average, the bovine athlete from Two Bit Bucking Bulls became the first in PBR Canada history to twice be crowned the PBR Canada Bull of the Year. Additionally, Happy Camper was one of four Canadian bulls selected to buck at the PBR World Finals, his fourth career selection to the sport’s most prestigious event.

First earning the honor in 2018, Happy Camper finished second in the Bull of the Year race in both 2019 and 2020. And in 2021, he returned with a vengeance, determined to conclude the season No. 1 in the standings. Happy Camper began his quest in early June, bucking at the Touring Pro Division event in Prince Albert, Saskatchewan. From the moment the chute gate burst open, Happy Camper’s determination was on full display. Besting three-time PBR Canada Champion Aaron Roy in 4.13 seconds, the animal athlete was marked an impressive 45.5 points.

Happy Camper was again marked 45 points or more in early July in Cluny, Alberta. Bucking off Nick Tetz in 3.09 seconds, the “Bucking Sensation from the Two Bit Nation,” was scored 3.09 seconds. As the season continued to unfurl, Happy Camper posted a head-turning 45-point score for the third time in 2021 when competed in mid-October in Medicine Hat. Upsetting Jordan Hansen in 6.09 seconds, Happy Camper earned a 45-point score. The striking animal athlete then travelled stateside to compete at the 2021 PBR World Finals in Las Vegas. For the first time in his career, Happy Camper earned two outs at the championship event. First marked 44 points in Round 3 when he teamed with Dener Barbosa for an 89.75-point score, Happy Camper bucked again in Round 5, this time covered by Mauricio Moreria for 89.25 points and earning a 43-point bull score.

Returning to Canada, Happy Camper concluded the season, with this title-clinching out at the PBR Canada Finals. Going head-to-head with 2019 PBR Canada Champion Daylon Swearingen, the two combined for a season-best 91.5-point score, as Happy Camper was scored 44.5 points.