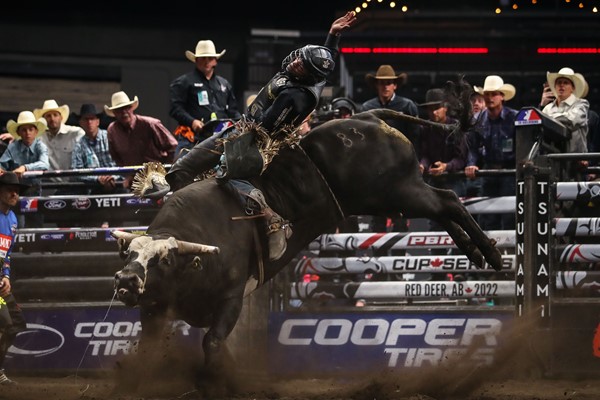 The 2022 season for the elite PBR Canada Cup Series, presented by Wrangler, will continue on Saturday, June 18 in Brandon, Manitoba. Photo: Covy Moore/CovyMoore.com.

BUCKING INTO BRANDON – This weekend, for the first time in history, PBR Canada’s elite Cup Series, presented by Wrangler, will buck into Brandon, Manitoba. The PBR Mazergroup Chute Out, will be held at Westoba Place on June 18. The tour stop is the second of the season, with the campaign for the elite Cup Series getting underway last weekend in Red Deer, Alberta. The Brandon event will begin Saturday, June 18 at 7 p.m. CDT.

THIS WEEKEND’S FORMAT – The PBR Mazergroup Chute Out, will feature two rounds of bull riding. Each rider will get on one bull in both Round 1 and Round 2 on Saturday. While Round 1 will be a pre-set draw, Round 2 will be done by a draft following the conclusion of the first round. The event champion will be the rider with the highest combined scored based on their two outs. This weekend, one rider will have the chance to earn 80 national points.

GARDNER RIDES TO THE W – As action for the 2022 PBR Canada Cup Series, presented by Wrangler, got underway Saturday evening in front of a raucous Red Deer, Alberta, crowd, no rider was more dominant than Jake Gardner. Compliments of a perfect 2-for-2 effort, Gardner won the PBR Red Deer Classic, presented by Tsunami Water Solutions, surging from unranked to No. 2 in the race for the 2022 PBR Canada Championship and accompanying $50,000 bonus. In Round 1, Gardner first went head-to-head against Tickety Boo inside the Peavey Mart Centrium. Matching the striking animal athlete jump-for-jump, Gardner was marked 83.5 points, punching his ticket to the championship round. As the penultimate man to leave the chutes, the Prince of the Peace Country was poised as he readied to climb atop Alberta Springs. In true cowboy fashion, Gardner gritted his way to the 8-second whistle, despite almost being upended seconds into the ride, earning an 86.5-point score to clinch the victory. Gardner’s golden finish earned him a crucial 74 national points. While he began the first-ever Cup Series event in Red Deer unranked, he is now the No. 2 rider in the national standings, a mere 6 points behind the No. 1 position. This weekend in Brandon, Gardner will look to continue his momentum when he climbs aboard Peaky Blinder in Round 1.

WEST CLAIMS NO. 1 RANK – Ahead of this weekend’s event in Brandon, Manitoba, there is a new No. 1-ranked rider in the race for the 2022 PBR Canada Championship – Lonnie West. As the only other rider to go a perfect 2-for-2 in Red Deer, West was second, collecting 55 national points to overtake the No. 1 rank in the Canadian standings. Fresh off his event win the night prior on the developmental Touring Pro Division in Meadow Lake, Saskatchewan, West kept his momentum rolling in Round 1 from Red Deer when he converted aboard Warning Shot for 81.5 points. West then remained flawless in the championship round when he covered Hanna Motors Winston Bruce for 86 points. Surging to No. 1 in the national standings, West leads No. 2 Jake Gardner by 6 national points. This weekend in Brandon, West will first attempt Smog as he attempts to further grow his lead atop the national standings.

SMELTZER, SMITH, COVERCHUK PLAY DOUBLE DUTY– This weekend, three riders will play double duty, competing at both the PBR Team Series preseason event in Bismarck, North Dakota, on Friday, June 7, and the Canadian Cup Series event in Brandon, Manitoba, on Saturday, June 18. All signed as free agents, Griffin Smeltzer and Blake Smith will ride for the Austin Gamblers, while Cody Coverchuk will compete for the Ariat Texas Rattlers. In Bismarck, Smith will attempt Dagger and Smeltzer will climb aboard Born To Sin in the Gamblers game against the Oklahoma Freedom. When the Ariat Texas Rattlers go head-to-head with the Carolina Cowboys, Coverchuk will face Oilfield Outlaw’s Yellow Feather. When the trio of Canucks return to home soil, Confused Mind awaits Smith in Brandon, while Smeltzer has drawn Hellfire and Coverchuk will face Buster.

FAMILIAR WATERS – Round 1 of the PBR Canada Cup Series’ Mazergroup Chute Out will feature just one familiar showdown. For the second time in his career, two-time PBR Canada Champion Zane Lambert will go head-to-head with Paulie Wallnutz. The two first went head-to-head last season in Saskatoon, when Lambert made the requisite 8 for a 69-point score. Lambert accepted his re-ride and was then bucked off by Pair of Aces in 3.81 seconds.

BULL PEN – This weekend’s bull pen for the debut PBR Canada Cup Series, presented by Wrangler, event in Brandon, Manitoba, will be headlined by the return of Muzzle Blast to the lineup. When the elite PBR Canada Cup Series event got underway last weekend in Red Deer, the standout from the X6 Ranch bucked a cut above the rest. Bucking in the championship round, Muzzle Blast upended Brazilian sensation Marcos Gloria in a quick 2.4 seconds, to earn an event-best 44.5-point bull score. This weekend in Brandon, Muzzle Blast will buck in the rider drafted Round 2, joined by fellow X6 Ranch bovines Magic Guy, Preacher, Devils Dues and Boo.

Two-time and reigning PBR Canada Bull of the Year Happy Camper will also be back in the draw. In Red Deer, Happy Camper made his 2022 PBR Canada debut, besting Griffin Smeltzer in 6.54 seconds en route to a 43.5-point bull score. 2020 PBR Canada Bull of the Year Catch My Drift will also buck in Brandon. Last weekend in Alberta, the fellow Two Bit bucker got the better of Callum Miller in a close 7.44 seconds to earn a 44-point bull score. Happy Camper and Catch My Drift will also both be in Round 2, joined by fellow bulls River Alley Ghost, Spooky Lukie and Langham Kid who also buck for the Two Bit outfit.

NEXT UP – The 2022 PBR Canada Sup Series, presented by Wrangler, will next travel to Regina, Saskatchewan, and the Brandt Center for the first of two midweek events on Wednesday, June 22. Action for the PBR Region Classic get underway at 7:00 p.m. CST.

PROVIDING PROTECTION – The bullfighters on hand for this weekend’s event in Brandon, Manitoba, are Logan Kadlec, Chase Keeley and Levi Hale.