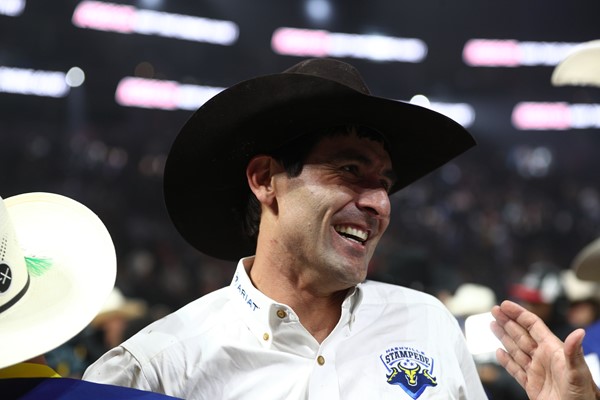 PUEBLO, Colo. – If there’s one man who knows his way around a championship event, it’s Silvano Alves.

So when Alves showed up in Las Vegas in 2022 for the inaugural PBR Team Series Championship, he was riding in what he good-naturedly calls his house.

“For me, it’s a special place,” Alves said of Vegas.

And it was a special weekend indeed, as Alves made history with his Nashville Stampede squad. The No. 8 seed went on an astounding run to win the first-ever PBR Team Series Championship, and Alves added a team title to his three individual titles, giving him a record fourth gold buckle.

“I’m very happy. Sometimes a bull riding career is crazy,” Alves said. “I’m very happy just to come here to support the team and go try and win. I’m very glad because I help my team for a couple games, and I thank God for another opportunity to do my job, and I’m very happy to be back here in Las Vegas for the Finals again to help my team.”

Alves went 2-for-4 for the Stampede, notching an 86.25-point ride on Game Over in Round 2 to send the team into the semifinals and an 85.5-point ride on Hunter in the championship game to help seal the deal.

And to think he wasn’t even drafted.

Alves signed with the Stampede as a free agent in August when head coach Justin McBride’s squad was badly struggling.

That may have been a blessing in disguise, though, as Alves says that being overlooked in the draft lit a fire in him.

“I know my potential. I know my job. I can do my job,” Alves said. “I don’t need to prove anything anymore for nobody. I just need to ride my bulls. That’s it. It’s a choice for each coach in the draft. I just put my head down and prayed for God for an opportunity can come for me.”

That opportunity came quickly, too, as Alves walked things off for the Stampede in just his second game in uniform, riding Yatesy Down Under for 85.25 points to defeat the Texas Rattlers on home soil in Nashville.

Ever since, Alves has been a veteran leader of a team that finished a disappointing 7-20-1 in the regular season before catching fire in Las Vegas. While he says he joined to help guide the younger riders and pass along his wisdom, the students sometimes become the teachers.

“I learn some stuff with the younger kids, too, because you (can) never know too much,” Alves said. “I’m very happy about my team because everybody works hard every single week and progresses every single week. It’s just the time now. It sometimes is you don’t win much, but every time, it’ll be a fight.”

Alves’s next fight will come as an individual again as he heads to Edmonton, Alberta, for the 2022 PBR Canada National Finals on Nov. 11-12.

In his storied career, Alves has only competed in two prior PBR Canada events – the Monster Energy Tour stop in Quebec City, Quebec, in May of 2018, and the Saskatoon PBR Classic last month. He placed sixth and third, respectively, and is a career 3-for-5 on Canadian soil.

“I go there because the points count for next season,” Alves said. “Just for good money, too. I want to go to different places and have fun and ride my bulls.”

Indeed, the PBR Canada National Finals event winner will earn a minimum of $30,000.

For a man who’s won just about everything there is to win in the PBR, it’s somewhat surprising to find a major event that he’s yet to even compete at. But Alves is excited by the fresh challenge that lies north of the border and hopes to add another coveted buckle to a collection that is growing once again.

“It’s more motivation because I won everything in the United States, and I’m very glad God blessed my life,” Alves said. “Everything I came here (for), I win. But it’s just what God prepared for my life. I’m very happy.”