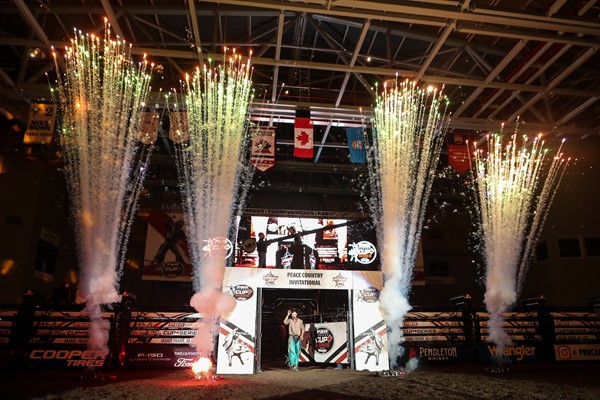 MAKING THE MOST OF MEDICINE HAT – This weekend, for the second time in history, PBR Canada’s elite Cup Series, presented by Wrangler, will buck into Medicine Hat, Alberta with the PBR Robertson Implements Classic, presented by Art’s Excavating. The tour stop is the eighth of the season, with the campaign for the elite Cup Series getting underway in Red Deer, Alberta on June 11, followed by tour stops in Brandon, Manitoba, and Regina, Saskatchewan in mid-June, Kelowna, British Columbia, in late July, and two events in Lethbridge, Alberta, and the most recent stop in Grande Prairie, Alberta. The Medicine Hat tour stop will be the penultimate regular-season event before the 2022 PBR Canada National Finals, presented by Command Tubular Products, on Nov. 11-12 at Rogers Place in Edmonton, Alberta. The Medicine Hat event will begin on Saturday, October 15 at 7 p.m. MT.

THIS WEEKEND’S FORMAT – The PBR Robertson Implements Classic, presented by Art’s Excavating, will feature two rounds of bull riding. Each rider will get on one bull in Round 1 on Saturday. The 10 bull riders with the top ride score will then advance to the championship round later that evening where they will attempt one final bull in an effort to be crowned the event champion. One rider has the chance to earn a maximum 80 national points in Medicine Hat.

ROY EYES UNPRECEDENTED FOURTH TITLE – This season, Aaron Roy is attempting to accomplish a feat never before done – be crowned a four-time PBR Canada Champion. And compliments of his event win at the most recent Cup Series, presented by Wrangler, event in Grande Prairie, Roy is now ranked inside the Top 5 in the heated race to be anointed the 2022 PBR Canada Champion. Roy was quick to put points on the board in Round 1 when he went the distance atop Teeka for 85 points. Tied for third ahead of Round 2, the veteran Canuck next readied to attempt Dealing After Midnight. Remaining in perfect time with the powerful animal athlete, three-time PBR Canada Champion Roy reached the requisite 8 for 85 points to surge to the top of the event leaderboard. With the first pick in the championship round bull draft, the Saskatchewan man elected to go head-to-head with Built Tough. Roy came down short of the whistle, hitting the ground in a close 6.25 seconds, however, his opening scores were enough to clinch him the event win. Compliments of the golden finish, Roy earned a crucial 79.5 national points. He gained three positions in the national standings, rising from No. 8 to No. 5. Roy now trails No. 1 Logan Biever by 91 points. This weekend in Medicine Hat, Roy will look to gain further ground when he first attempts Buster in Round 1 inside Co-op Place.

COVERCHUK CHASES ELUSIVE BACK-TO-BACK CHAMPIONSHIPS – This November, Cody Coverchuk will look to etch his name further into the PBR record books, not only as just the second three-time PBR Canada Champion, but the first rider to win the honor in consecutive seasons. At the most recent PBR Canada Cup Series event in Grande Prairie, Alberta, Coverchuk finished second to inch within a mere 91.5 points of the No. 1 rank in Canada. Going 2-for-3, Coverchuk bookended his outing inside Bonnetts Energy Centre with round-winning scores. In Round 1, Coverchuk brought the electric crowd to a near deafening roar when he outlasted Wild Time for 87.5 points. On Championship Saturday, the 28-year-old capped his outing with the top score of the championship round, marked 78.5 points aboard Hanna Motors Winston Bruce. Netting 80 national points, Coverchuk rose one position in the Canadian standings, climbing from No. 7 to No. 6. Eager to continue his climb up the standings, Coverchuk has drawn Sugar Jacked in Round 1 of the PBR Robertson Implements Classic, presented by Art’s Excavating.

PAST MEDICINE HAT EVENT WINNERS – PBR Canada’s elite Cup Series, presented by Wrangler debuted in Medicine Hat in 2021, when two-time PBR Canada Champion Zane Lambert went a perfect 2-for-2 to win the tour stop and surge to No. 2 in the national standings. Lambert, began his outing inside Co-op Place in successful fashion, recording the sixth-best score of Round 1 when he covered Bob Rock for 83 points. The qualified ride avenged Lambert’s lone buckoff from his victory in Lethbridge, Alberta, earlier that season, when the Skori Bucking Bulls’ bovine athlete got the better of him in a swift 1.84 seconds during Round 2 inside ENMAX Centre. In the championship round bull draft on Saturday night, Lambert once again elected to go head-to-head against a familiar opponent, drafting Lil’ Hooch. The Ponoka-native covered the bull for 87.5 points in mid-August en route to a runner-up finish at the Touring Pro Division event in Coronation, Alberta. Fast forward three months, and Lambert once again made the requisite 8, this time marked a championship round-best, and event victory-clinching, 86.5 points. Lambert’s flawless finish earned him a crucial 68 national points. After travelling to Medicine Hat ranked No. 4 in the nation, the 35-year-old surged to No. 2 in the race for the 2021 PBR Canada Championship.

In 2019, the PBR debuted in the Alberta city, hosting a stop on the developmental Touring Pro Division. As one of two riders to deliver a perfect performance, Dakota Buttar captured his second PBR Canada event win of the season. Buttar’s evening began strong in Round 1, recording the second highest marks when he reached the 8-second whistle aboard Broken Trigger for 85 points. Continuing the momentum, the then 26-year-old remained flawless in Medicine Hat when he recorded the high-marked ride of the event, scored 88.5 points on Spooky Lukie in the championship round. For his efforts, Buttar earned 320 Canadian points, propelling him from No. 12 to No.5 in the standings.

FAMILIAR WATERS – Round 1 of the PBR Canada Cup Series, presented by Wrangler, event in Medicine Hat, Alberta, will feature just two rematches. Those familiar showdowns are:

Of the bulls bucking this weekend, Two Bit Bucking Bulls’ Langham Kid leads the way, currently No. 3. Langham Kid has twice been named Bull of the Event this season, topping the field at the Touring Pro Division events in Stavely, Alberta, and Armstrong, British Columbia. At the most recent tour stop in Grande Prairie, Langham Kid was scored 43.5 points for his 4.74 seconds of work against Jared Parsonage. Also hailing from Two Bit Bucking Bulls, two-time and reigning PBR Canada Bull of the Year Happy Camper is tied for No. 4 in the present standings. Happy Camper has been anointed Bull of the Event three times this season, earning the honor at the Cup Series events in Brandon, Manitoba, and Regina, Saskatchewan, and at the Touring Pro Division event in Calgary. At the most recent event in Grande Prairie, Happy Camper was marked 43 points during his trip with Blake Smith. Langham Kid has been drawn by Weston Hartman in Round 1, and Happy Camper will buck in the championship round.

NEXT UP – Following a one-week break, the 2022 PBR Canada Sup Series, presented by Wrangler, will next travel to Saskatoon, Saskatchewan, and SaskTel Centre on Friday, October 28 and Saturday, October 29. Action for the PBR Saskatoon Classic, presented by Redhead Equipment and CASE IH, will get underway nightly at 7:00 p.m. MT.