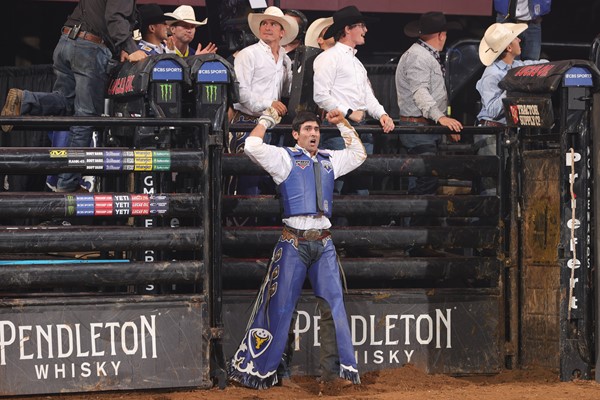 ALL ROADS TO FINALS LEAD THROUGH SASKATOON – This weekend, for the 14th time in history, PBR Canada’s elite Cup Series, presented by Wrangler, will buck into Saskatoon, Saskatchewan, and SaskTel Centre with the PBR Saskatoon Classic, presented by Redhead Equipment and CASE IH. The tour stop is the ninth of the season, with the campaign for the elite Cup Series getting underway in Red Deer, Alberta on June 11, followed by tour stops in Brandon, Manitoba, and Regina, Saskatchewan in mid-June, Kelowna, British Columbia, in late July, two events in Lethbridge, Alberta, and the most recent stops in Grande Prairie and Medicine Hat, Alberta. The Saskatoon tour stop will be the final regular-season Cup Series event before the 2022 PBR Canada National Finals, presented by Command Tubular Products, on Nov. 11-12 at Rogers Place in Edmonton, Alberta. The Saskatoon event will begin on Friday, October 28 and Saturday, October 29 at 7 p.m. MT.

THIS WEEKEND’S FORMAT – The PBR Saskatoon Classic, presented by Redhead Equipment and CASE IH, will feature two rounds of bull riding. Each rider will get on one bull in Round 1 on Friday and Round 2 on Saturday. The 10 bull riders with the top combined ride scores will then advance to the championship round on Saturday where they will attempt one final bull in an effort to be crowned the event champion. While the Round 1 lineup will be drawn, riders will draft their Round 2 bulls. In the main event, one rider will have the chance to earn a maximum 105 national points. The Cup Series event in Saskatoon will also feature the second 5/5 Bucking Battle of the year. Following Friday night’s Round 1, the Top 5 riders from the opening round will attempt five of the event’s top bulls. Featuring both a separate purse, and national points, $2,500 will be available, with the winner set to collect 15 national points.

RADFORD WINS MEDICINE HAT, CRACKS TOP 5 – This November, Brock Radford is determined to conclude the season with nothing less than his first PBR Canada Championship. And at the most recent Cup Series, presented by Wrangler, event in Medicine Hat, Alberta, Radford took one step forward in actualizing that goal. Going a perfect 2-for-2, the Albertan won the tour stop inside Co-op Place surging from No. 7 to No. 3 in the heated battle to be crowned the 2022 PBR Canada Champion. Radford got off to an electric start in Round 1, delivering the fourth-best score when he conquered Devils Dues for 84.5 points. In the championship round, the charismatic Albertan then readied to attempt Look At This Dude. Remaining in perfect time with the powerful animal athlete, Radford reached the requisite 8 for 85 points to clinch the victory. Radford is now just the second rider to win multiple Cup Series events this season. First victorious in Kelowna, British Columbia, Radford joins multi-event winner Nick Tetz who dominated both tour stops in Lethbridge, Alberta, in September. The golden finish garnered Radford a crucial 65 national points. He surged from No. 7 to No. 3 in the nation, now within a mere 40 points of the top spot. Keen to continue his momentum and overtake the No. 1 rank this weekend in Saskatoon, Radford has drawn a rematch with Red Coat in Round 1.

MEET YOUR NEW NO. 1 … NICK TETZ – When the dust settled inside Co-op Place in Medicine Hat, Alberta, for the most recent Cup Series, presented by Wrangler, event there was a new Canadian No. 1 – Nick Tetz. The Calgary native parlayed a 2-for-2 effort into a runner-up finish, overtaking Logan Biever for the No. 1 rank in the Canadian standings. The 2018 PBR Canada Rookie of the Year first put points on the board in Round 1 when he covered Super Fly for 82.5 points. Positioned seventh on the event leaderboard, Tetz then went head-to-head with Bustin Rhymes in the championship round. In a match-up which proved dividends, Tetz covered the bull for 86.5 points to win the round and capture the podium finish. The silver showing garnered Tetz a much-needed 57 national points. After traveling to Medicine Hat No. 2 in Canada, 54.5 points behind the top-ranked rider, Tetz surged to the No. 1 position in the nation. Tetz now leads an injured No. 2 Biever by a slim 2.5 points. As Biever remains sidelined by injury, Tetz will look to further extend his lead atop the standings this weekend in Saskatoon. He will attempt Back Cracker as the last man out in Round 1 inside SaskTel Centre.

HISTORY IN THE MAKING – This season, several of Canada’s finest are chasing history. All positioned inside the Top 10 each remain in the hunt for the coveted title of 2022 PBR Canada Champion. Here are those riders to watch:

LADIES AND GENTS … THREE-TIME WORLD CHAMP SILVANO ALVES – In the history of the PBR, two riders have been crowned the PBR World Champion three times over, and this weekend, one of those wildly accomplished individuals will headline the draw for the PBR Canada Cup Series, presented by Wrangler, event in Saskatoon – Silvano Alves. In addition to being one of only two PBR World Champions, Alves also holds the PBR record for 24 consecutive qualified rides. Adding to his laundry list of accomplishments, Alves has earned more than $6.38 million in competition, the second most of any rider. This weekend in Saskatoon, Alves will compete for just the second time in his career on Canadian soil, and first since he rode at the elite Cup Series event in Quebec City in 2018. After concluding the 2022 season ranked No. 39 in the world, he was signed as a free agent by the Nashville Stampede, making an immediate impact on the team. With the PBR Team Series amid a break before the inaugural Championships in Las Vegas, Alves will travel to Canada to remain in top-shape. In Round 1, he has drawn Broken Halo as the second man out.

PAST SASKATOON EVENT WINNERS – Last season in Saskatoon, Jordan Hansen delivered a perfect 3-for-3 performance to win the PBR Saskatoon Classic and crack the Top 5 in the race for the 2021 PBR Canada Championship. Hansen was one of 15 riders to deliver a score in Round 1, covering Black Jack for 82 points. The reserved Albertan then climbed the leaderboard when he tied for third in Round 2 courtesy of an 84-point effort aboard New Tattoo. With the fourth pick in the championship-round bull draft, Hansen selected 2019 PBR Canada Bull of the Finals Finning Lil Shorty. In a new rivalry, the 28-year-old matched the striking bovine athlete jump-for-jump en route to an event-best 89.5-point score. Hansen earned a critical 81 national points, propelling him inside the Top 5 in the race for the 2021 PBR Canada Championship. He surged to No. 3 in the standings, inching within 96.66 points of then No. 1 Dakota Buttar. Prior to the 2021 Cup Series event, Saskatoon had been home to the PBR Canada National Finals. Of the 13 prior PBR Canada events held in Saskatoon, 10 have marked the year-end PBR Canada National Finals.

*Denotes an iteration of the PBR Canada National Finals.

FAMILIAR WATERS – Round 1 of the PBR Canada Cup Series, presented by Wrangler, event in Saskatoon, Saskatchewan, will feature seven rematches. Those familiar showdowns are:

Of the bulls bucking this weekend, Stay Alert from Lazy S Bucking Bulls is presently ranked No. 2 in the standings, however, needs two more outs to be eligible for the year-end honor. The powerful animal athlete’s one out in PBR Canada competition this season was delivered at the Manor Touring Pro Division event when he led the pen. Stay Alert was scored 44.5 points for his 3.05-second buckoff of Stefan Tonita. He will buck in the championship round in Saskatoon.

Two Bit Bucking Bulls’ Happy Camper and Langham Kid, both Bull of the Year eligible, will also buck in Saskatoon in the championship round, presently No. 3 and No. 4, respectively, in the standings. Two-time and reigning PBR Canada Bull of the Year Happy Camper will travel to Saskatoon fresh off being named the YETI “Built for the Wild” Bull of the Event in Medicine Hat, Alberta, marked 45 points for his 4.47-second buckoff of Callum Miller. Happy Camper has now been anointed Bull of the Event four times this season, also earning the honor at the Cup Series events in Brandon, Manitoba, and Regina, Saskatchewan, and at the Touring Pro Division event in Calgary. Langham Kid has twice been named Bull of the Event this season, topping the field at the Touring Pro Division events in Stavely, Alberta, and Armstrong, British Columbia. At the most recent tour stop in Medicine Hat, Langham Kid was scored 44 points for his 2.95 seconds of work against Weston Hartman. Looking down the standings, Superstition and Phantom Fury, who are tied for No. 5 in the PBR Canada Bull of the Year race, will also join the rank pen slated to compete in Saskatoon. Superstition will be out in Round 1 and Phantom Fury will be out in the final round.

NEXT UP – Following a one-week break, the 2022 PBR Canada season will conclude in Edmonton, Alberta for the PBR Canada National Finals, presented by Command Tubular Products, when the 2022 PBR Canada Champion will be crowned, earning the accompanying $50,000 bonus. Action for the year-end event inside Rogers Place will get underway at 7:00 p.m. MT on Friday, November 11 and Saturday, November 12.

PROVIDING PROTECTION – The bullfighters on hand for this weekend’s event in Saskatoon, Saskatchewan, are Tanner Byrne, Chase Keeley and Brett Monea.