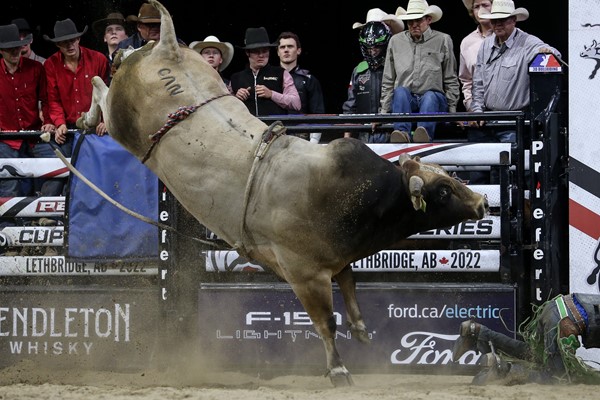 GETTING RANK IN GRANDE PRAIRIE – This weekend, for the third time in history, PBR Canada’s elite Cup Series, presented by Wrangler, will buck into Grande Prairie, Alberta with the PBR Peace Country Invitational, presented by Ritchie Bros. The tour stop is the seventh of the season, with the campaign for the elite Cup Series getting underway in Red Deer, Alberta on June 11, followed by tour stops in Brandon, Manitoba, and Regina, Saskatchewan in mid-June, Kelowna, British Columbia, in late July, and two events this past weekend in Lethbridge, Alberta. The Grande Prairie event will begin on Friday, September 30 and Saturday, October 1 at 7 p.m. MT.

THIS WEEKEND’S FORMAT – The PBR Peace Country Invitational, presented by Ritchie Bros., will feature two rounds of bull riding. Each rider will get on one bull in Round 1 on Friday and Round 2 on Saturday. The 10 bull riders with the top combined ride scores will then advance to the championship round on Saturday where they will attempt one final bull in an effort to be crowned the event champion. The Cup Series event in Grande Prairie will also feature the first 5/5 Bucking Battle of the year. Following Friday night’s Round 1, the Top 5 riders from the opening round will attempt five of the event’s top bulls. Featuring both a separate purse, and national points, $2,500 will be available, with the winner set to collect 15 national points.

WHAT’S BETTER THAN ONE WIN? TWO – There was no rider more dominant at the most recent Cup Series events in Lethbridge, Alberta, than Nick Tetz. Going a perfect 4-for-4, Tetz won the back-to-back events, surging from No. 8 to No. 2 in the national standings. When competition got underway Friday evening for the first of two iterations of the PBR South Country Co-op Showdown, Tetz readied to climb aboard Slip Slap for the third time in his career. Having made the requisite 8 in both of their previous meetings, Tetz first covered the powerful animal athlete for 84 points during the 2021 Touring Pro Division stop in Marwayne, Alberta, and then for 87 points during this season’s developmental event in Calgary. The 2018 PBR Canada Rookie of the Year kept his success streak alive aboard Slip Slap in Lethbridge, matching the bull jump-for-jump en route to an 85-point score. Positioned second on the event leaderboard ahead of the championship round, Tetz elected to attempt Up Shit. In a decision which proved dividends, Tetz remained in perfect time with the bull, making the whistle for a victory-clinching 86 points. Tetz’s golden finish earned him a crucial 77 national points. He rose two positions in the national standings from No. 8 to No. 6, inching within 79 points of No. 1 Logan Biever.

When the event continued Saturday, Tetz returned to action amidst a wave of momentum as he readied to take on Later Gator in Round 1. As the last man to leave the chutes, Tetz punched his ticket to the championship round as the top-ranked man in the event as he reached the requisite 8 aboard the powerful animal athlete for 86.5 points. Tetz then elected to go head-to-head with Deep Creek as his final opponent. Matching the bull jump-for-jump, Tetz appeared to reach the whistle, however the call went into an immediate official’s review. After careful scrutiny, Tetz was awarded a score, marked an event-best 88 points to clinch the golden finish. Tetz’s unrivaled effort earned him a maximum 80 national points as he seeks his career-first PBR Canada Championship this November in Edmonton, Alberta. After beginning the event ranked No. 6 in Canada, Tetz surged to No. 2, inching within a mere 28 points of the top rank. Eager to leave Grande Prairie with the No. 1 rank, Tetz will first go head-to-head with Haunted Halos in Round 1 of the PBR Peace Country Invitational, before facing off with Crying Over You as the first man out in Round 2.

BIEVER EXTENDS LEAD ATOP STANDINGS – While he may not have had the weekend he wanted, Logan Biever left the double-header event in Lethbridge with a larger lead atop the national standings. After begging his home province event a mere 10.5 points ahead of then No. 2 Dakota Buttar, he is now 28 points out front of No. 2 Nick Tetz. Despite being shutout on the opening night of competition, Biever was quick to rebound for the second iteration of the PBR South Country Co-op Showdown, finishing fourth and earning a much-needed 29 national points. Despite being bested by Gandy in a hard-fought 5.35 seconds in Round 1, Biever was one of six riders who had a renewed shot of victory when they advance to the final round via time. Making the most of his second chance, Biever conquered 2020 PBR Canada Bull of the Year Catch My Drift for 84 points. Biever will look to continue his momentum this weekend in Grande Prairie, first facing Cheech in Round 1 inside Bonnetts Energy Centre, followed by Bustin Rhymes in Round 2.

SMITH SURGES IN RETURN HOME – After spending several weeks stateside competing with the Austin Gamblers for the PBR Team Series, young gun Blake Smith returned to home soil in triumphant fashion, delivering a third and second-place result to rise from No. 4 to No. 3 in the national standings. During the opening event in Lethbridge, Smith tied for third, conquering Red Pearl for 84.5 points in Round 1. He collected 32.5 national points to remain No. 4 in the PBR Canada national standings and rise within 65.17 points of No. 1 Logan Biever. Smith remained red-hot as competition continued Saturday, parlaying a flawless 2-for-2 finish into a runner-up result. After riding Big Duece for 81.5 points in Round 1, Smith began the championship round as the third-ranked rider in the event. With an early pick in the championship round bull draft, Smith selected a familiar opponent in Eski Time. A rubber match, after bucking off the bull in 2.96 seconds during the October 2021 Cup Series event in Saskatoon, Saskatchewan, Smith covered the bull in their most recent showdown, scored 83.5 points en route to his event win last December on the Touring Pro Division in Lloydminster, Saskatchewan. Smith replicated his past success, clinching the silver finish as he reached the whistle for 87.5 points. The young Saskatchewan man rose one position in the national standings from No. 4 to No. 3. He is now within 33.17 points of No. 1 Biever. Remaining in Canada for the forthcoming event in Grande Prairie, Smith will attempt Bob Rock in Round 1 and Black Jack in Round 2. Smith will also be joined by fellow Austin Gamblers rider and Canuck Griffin Smeltzer for this weekend’s PBR Peace Country Invitational at Bonnetts Energy Centre. Smeltzer is currently No. 21 in the national standings, and has drawn Big Easy in Round 1 and Hou’s Sippin in Round 2.

PAST GRANDE PRAIRIE EVENT WINNERS – Last season, Peace Country contender Jake Gardner was triumphant inside Bonnetts Energy Centre, going a perfect 3-for-3 to win his career-first elite Cup Series event title. In Round 1, Gardner was quick to strike, covering Oldsmobile for 82 points, the sixth best score of the round. Gardner continued his success in Round 2 covering Blue Blood for 83 points to surge to second on the event leaderboard. With the second pick in the championship-round bull draft, Gardner selected 2021 PBR Canada Bull of the Year contender Lil’ and covered the bovine athlete for a championship round-best 89 points, clinching him the event win. Earning 96 national points for his efforts, Gardner cracked the Top 10 in the Canadian standings after beginning the second Cup Series event of the year ranked No. 26. Rising 17 positions, Gardner surged to No. 9 in the feverish title race, climbing within 109.83 points of then No. 1 Dakota Buttar. As the electric season continued to unfurl, Gardner remained a title contender until the final rounds of the year, a key contender in one of the most exciting, and historic, battles for the PBR Canada Championship in history. When the dust settled, he concluded the season No. 6 in Canada.

While the elite Cup Series debuted in 2020, the city first welcomed PBR in 2019, hosting a stop on the Canadian Touring Pro Division. Going a perfect 2-for-2, Thor Hoefer II won the inaugural event, followed closely by runner-up Brock Radford.

FAMILIAR WATERS – During the opening round of competition for the PBR Peace Country Invitational in Grande Prairie, Alberta, one rider will face a familiar opponent. Chad Hartman will look to keep his perfect record intact against Jail Bait. Last weekend during Round 1 of the event in Lethbridge, Alberta, Hartman became the first rider to cover the animal athlete, reaching the requisite 8 for 84.5 points.

In Round 2 of the Cup Series event three riders will attempt past opponents with none having previously made the 8.

BULL PEN – This weekend’s bull pen for the PBR Canada Cup Series, presented by Wrangler, event in Grande Prairie, Alberta, will be supplied by seven different contractors including: Braithwaite Ranches, Skori Bucking Bulls, Thompson Rodeo Livestock, Two Bit Bucking Bulls, Vold Rodeo, Wild Hoggs Bucking Bulls and X6 Ranch Bucking Cattle. With just a handful of events remaining before the 2022 PBR Canada National Finals, presented by Command Tubular Products, in Edmonton, Alberta, on Nov. 11-12, the race to be crowned the 2022 PBR Canada Bull of the Year is intensifying. The 2022 PBR Canada Bull of the Year will be the animal athlete with the top average score when combining his Top 3 outs from the regular season across all levels of competition and his one out at the 2022 PBR Canada National Finals. Of the bulls bucking this weekend, Two Bit Bucking Bulls’ Langham Kid leads the way, currently No. 3. Langham Kid has twice been named Bull of the Event this season, topping the field at the Touring Pro Division events in Stavely, Alberta, and Armstrong, British Columbia. Last weekend in Lethbridge, Langham Kid delivered back-to-back 44-point scores in the championship rounds for his 4.12-second buckoff of Cody Fraser and 6.73 seconds of work against Cody Coverchuk. Also hailing from Two Bit Bucking Bulls, two-time and reigning PBR Canada Bull of the Year Happy Camper is tied for No. 4 in the present standings. Happy Camper has been anointed Bull of the Event three times this season, earning the honor at the Cup Series events in Brandon, Manitoba, and Regina, Saskatchewan, and at the Touring Pro Division event in Calgary. At the most recent event in Lethbridge, Happy Camper was marked 41.5 points during his trip with Chad Hartman when he fouled himself. Both Langham Kid and Happy Camper will buck in the championship round in Grande Prairie.

NEXT UP – The 2022 PBR Canada Sup Series, presented by Wrangler, will next travel to Medicine Hat, Alberta, and Co-op Place on Saturday, October 15. Action for the PBR Robertson Implements Classic, presented by Art’s Excavating, will get underway nightly at 7:00 p.m. MT.