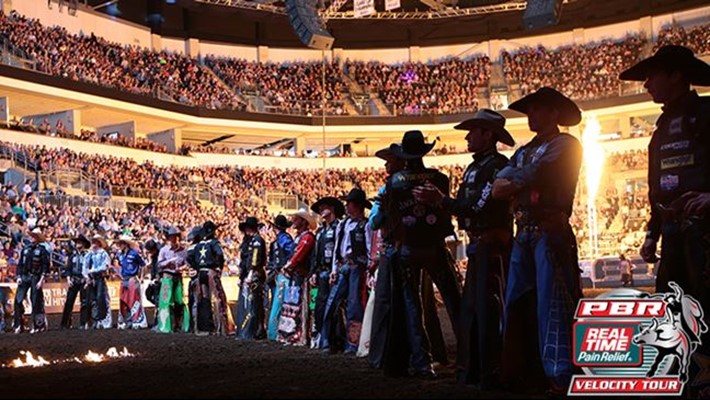 West goes 3-for-4 in New Town, North Dakota to capture the first Velocity Tour win of his career.

In just the second RVT event of his career, West rode 3-out-of-4 bulls during the two-day event to take the victory along with 80 points towards the PBR world standings and a paycheck of $9,009.89.

Finishing in a tie for second place was Brady Oleson (Blackfoot, Idaho) and Jesse Tillman (Olathe, Kansas). Each one also rode three of their four bulls during the two-day event to finish with 40 points each. Oleson won $8,350.63 while Tillman took home $6,537.66.

Derek Kolbaba (Walla Walla, Washington), the No. 2 ranked bull rider in the world, finished in fifth place after going 8 aboard Stand Up (Dakota Rodeo / Chad Berger / Clay Struve) for 89.5 points on Saturday night.

The next stop on the Real Time Pain Relief Velocity Tour will be in Huntington, West Virginia on December 1-2 at the Sandy Superstore Arena.

The 2018 Velocity Tour will culminate with the Velocity Tour Finals at South Point Arena in Las Vegas in 2018, leading into the PBR’s Built Ford Tough World Finals at T-Mobile Arena.