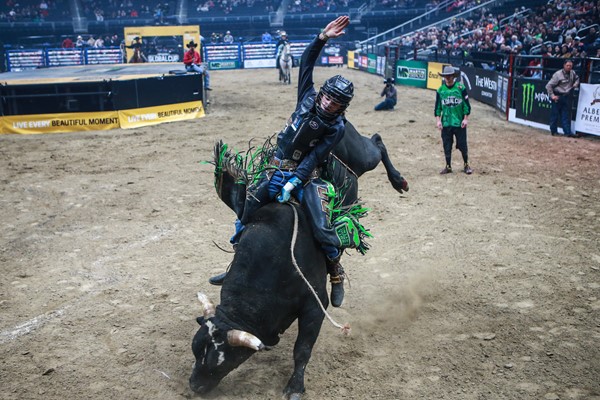 Lonnie West rides Pop the Latch for 86.5 points in Round 1 of the PBR Global Cup qualifier at Rogers Place on November 9th, 2017. Photo by Covy Moore / CovyMoore.com

EDMONTON, Alberta – As one of only two riders to deliver a perfect performance inside Rogers Place Thursday night, Lonnie West (Cadogan, Alberta) rode both his bulls to win the PBR (Professional Bull Riders) Monster Energy Team Canada Qualifier, securing his spot on Team Canada ahead of the inaugural Global Cup, presented by Encor by EPCOR.

The event, which featured a rank pen of Canadian bulls, showcased 25 home-country riders vying for $70,000 and one of nine open spots on Team Canada for the inaugural five-nation PBR Global Cup Nov. 10-11, which will award a total of $1 million.

West opened the evening with a Round 1-winning 86.5-point trip aboard Pop The Latch (Wild Hoggs Bucking Bulls), and closed the first-ever bull riding event inside the state-of-the-art arena with 83 points on Wait For It (Thompson Rodeo Livestock).

For the win, the 21-year-old, who grew up watching PBR on TV, earned a career-high $24,686.67 and was the first of five riders who advanced to Team Canada based on their performance in the aggregate of the two-round event.

“This is the biggest purse I’ve ever competed for, and that’s going to push all of us,” said West, whose father, Kevin, won $50,000 at the Calgary Stamped in 1989 – the same amount the individual Global Cup aggregate winner can claim in Edmonton this weekend.

Jackson Scott (Kamloops, British Columbia) covered Kool Aid (R Saga Ranch Ltd) for 86.25 points in Round 1 to secure his spot on the national team, while Ty Patten’s (Strathmore, Alberta) 82.5-point trip aboard Papa’s Rockstar (Vold Rodeo/Prescott) in Round 2 booked his ticket to the main event.

Advancing via buckoff time, 2017 PBR Canada Rookie of the Year Coy Robbins (Camrose, Alberta) and Cole Young (Fairview, Alberta) completed the five-rider lineup that advanced to Team Canada compliments of their performance on the first night of action.

In a preview of what the four challenging nations will face Friday and Saturday at Rogers Place, Radford, Lambert and Lloyd all logged qualified rides to finish second, fifth and sixth, respectively.

Radford, who was one of the top riders all year at PBR Canada events, winning an unprecedented four consecutive Touring Pro Division (TPD) events, finished second, joining West as the only other rider to go 2-for-2.

In Round 1, the 22-year-old made the 8 seconds on Broken Trigger (Skori Bucking Bulls) for 79.75 points before winning Round 2 with 84.75 points on Moves Like Pozzy (Vold Rodeo/Prescott).

With Team Canada’s roster complete, the final rider line-ups for all five competing nations are set:

The star-studded field includes three PBR World Champions, with four of the Top-5 and seven of the Top-10 ranked riders at the end of the 2017 season set to ride at the Edmonton event.

Asked if the Canadian team might be intimidated by these top bull-riding stars, Team Canada coach Roy said, “The riders we have are already superstars. We don’t have to be perfect; we have the home-field advantage.”

The five nations, with Canada fielding 14 riders, will go head-to-head starting Friday, Nov. 10, at 7 p.m. MT at Rogers Place. All riders will get on one bull as assigned by their team coach, with two riders set to attempt a bonus bull at night’s end, also coach assigned.

TSN-2 will broadcast Friday’s action LIVE starting at 7 p.m. MT, while fans around the globe can tune into PBR.com/ondemand beginning at 7 p.m. MT for all the action.