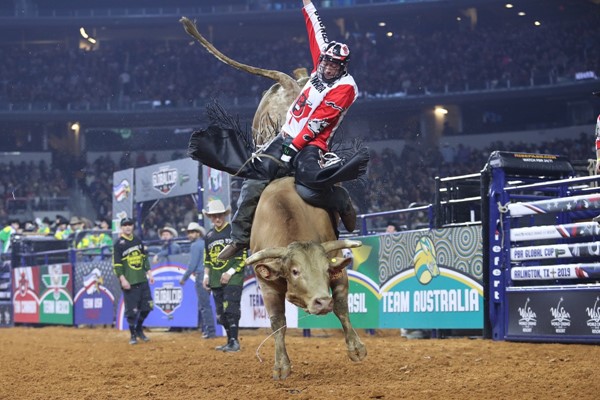 Jordan Hasnen went 1-for-2 putting up the only score for Team Canada on Day 1. Photo by Andy Watson / BullStockMedia.com

The nation’s lone qualified ride was earned by Jordan Hansen (Okotoks, Alberta) who rode Bottoms Up (TNT Bucking Bulls/Hart Cattle Co.) for 87 points in the bonus round.

Lead by a flawless Eduardo Aparecido (Gouvelandia, Brazil), Team Brazil went 7-for-9 on the first night of the event to surge to a 245.25-point lead over the home nation’s Team USA-Eagles.

Previously victorious at a PBR event inside AT&T Stadium, winning the 2017 Iron Cowboy, Aparecido recorded his first qualified ride in the opening round when he rode Constant Sorrow (Blake Sharp/Machinery Auctioneers) for 82 points. Selected by Coach and 2010 PBR World Champion Renato Nunes (Buritama, Brazil) to compete in the bonus round, Aparecido remained flawless when he rode Uncle Gangster (Ogden Ranch/Hart Cattle/Clapp) for 88.5 points.

Jose Vitor Leme (Ribas do Rio Pardo, Brazil) made history on the opening night of the inaugural PBR Global Cup USA, recording the first-ever 90-point ride at the Olympics of bull riding. Achieving the milestone in the bonus round, Leme rode Frequent Flyer (D&H Cattle/Erwin Cattle) for 90 points.

Next to erupt from the chutes for Team Brazil was 2018 PBR World Champion Kaique Pacheco (Itatiba, Brazil) who had yet to compete in 2019 since tearing his left MCL/PCL in November at the Velocity Tour Finals. With the crowd inside AT&T Stadium eagerly awaiting his return, the Ice Man brought them to their feet when he rode Taco Cat (Dakota Rodeo/Chad Berger/Clay Struve/WCM Auctioneers) for 83.5 points.

Fernando Henrique Novais (Pereira Barreto, Brazil), who qualified to the team via the PBR Brazil national standings, struck next when he rode Uncle Keith (Phenom Genetics/Bills/Sankey Pro Rodeo) for 85 points.

The home nation contingent was led by 2016 PBR World Champion Cooper Davis (Buna, Texas), who is going 2-for-2 and currently leads the individual aggregate.

Davis first reached the 8 on Arctic Assassin (Phenom/JCL/Swalin/Goods Bucking Bulls/Sankey Pro Rodeo) in Round 1 for 85.75 points, which he followed with on 89.5-point ride on Hard & Fast (Glover Cattle/D&H Cattle) in the bonus round.

Also putting up scores for the contingent were Ryan Dirteater (Hulbert, Oklahoma; Cherokee) and Stetson Lawrence (Williston, North Dakota; Chippewa and Sioux). Dirteater was marked 85.75 points on Boogie Bomb (Bland Bucking Bulls), while Lawrence made the 8 on ZZ Top (Blake Sharp) for 85 points.

In fourth is Team Mexico who went 2-for-9 to finish the first night 425 points behind Team Brazil.

After hosting the last edition of the PBR Global Cup, Team Australia is fifth, going 2-for-9 for 169.5 points.

Fans can relive all the action from the event’s first night starting at 8:00 a.m. EST tomorrow, Sunday, February 10, on RidePass.