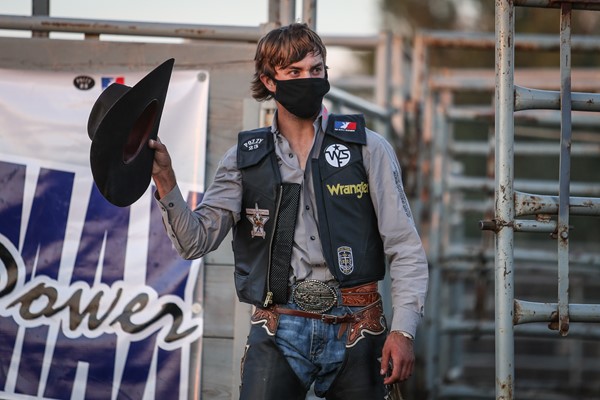 PRINCE ALBERT, Saskatchewan – At the first-ever Tanner Byrne Invitational, part of the PBR (Professional Bull Riders) Canada Touring Pro Division, held at the Byrne Family ranch in Prince Albert, Saskatchewan, no rider was more dominant than Lonnie West (Cadogan, Alberta). Sweeping both Round 1 and the championship round, West marched to victory, claiming his first PBR event win since August 2019.

The 24-year-old began the event with a Round 1-best, 86-point ride aboard Broken Trigger (Skori Bucking Bulls).

Sitting atop the leaderboard ahead of the final round, West’s momentum continued, covering 2019 PBR Canada Bull of the Finals Finning Lil Shorty (Flying Four Bucking Bulls) for an event-best, and career-high, 89.5 points.

West’s flawless performance earned him a cheque for $2,305.63, in addition to 32 Canadian and 10 world points.

After beginning the event No. 27 in the national standings, the Albertan catapulted to No. 13, now 207.5 points behind No. 1 Dakota Buttar (Kindersley, Saskatchewan).

Buttar competed at the Tanner Byrne Invitational, however was unable to further his stronghold on the No. 1 position after he was bucked off by Wilford (Skori Bucking Bulls) in 5.51 seconds in Round 1.

Lambert rose two positions in the national standings, climbing from No. 8 to No. 6, now within 157 points of the top ranking.

In third was 2018 PBR Canada Rookie of the Year Nick Tetz (Calgary, Alberta).

Tetz rose one position in the PBR Canada national standings, now No. 9 and within 176 points of No. 1 Buttar.

Gardner maintained his No. 12 ranking, but is now within 204 points of the nation’s top spot

Rounding out the Top 5 was Fabian Dueck (Loma Plata, Paraguay).

In the bull pen, Finning Drop Bear (Flying Four Bucking Bulls) was the high-marked bull of the event. The powerful bovine athlete was marked an event-best 44.5 points for his 4.59-second buckoff of Gardner in the championship round.