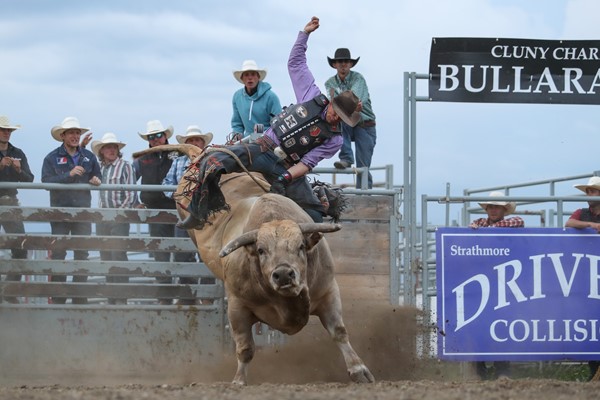 Winning the second Touring Pro Division event of the year in Cluny, 2018 PBR Canada Champion Cody Coverchuk is now the No. 1 ranked rider in the nation. Photo: Covy Moore/CovyMoore.com.

CLUNY, Alta. – In front of a raucous crowd at Coulee Creek Farms Friday night, 2018 PBR (Professional Bull Riders) Canada Champion Cody Coverchuk (Meadow Lake, Saskatchewan) was dominant, sweeping both rounds of competition to win the opening iteration of the Cluny Charity PBR, presented by Drivers Collision, and surge to the No. 1 position in the national standings.

Initially drawing Miguel (Eno Bucking Bulls) in Round 1, Coverchuk earned a re-ride, an opportunity he seized. Next matching up against Double Major (Wild Hoggs/Corey Chmelnyk), the Saskatchewan man made the requisite 8, marked an opening round-best 84 points.

As the last man to leave the chutes, the 27-year-old was locked in a battle of champions in the final round, climbing aboard 2019 PBR Canada Bull of the Year Homegrown (Eno Bucking Bulls/Gaume Farms).

A rematch, Coverchuk covered Homegrown for 86 points during the 2018 PBR Canada Finals en route to both his victory at the season-culminating event and career-first national title.

For his efforts, Coverchuk earned 32 national points and catapulted to the top of the national standings. He now leads No. 1 Jared Parsonage (Maple Creek, Saskatchewan) by 5 points.

Should Coverchuk capture the 2021 PBR Canada Championship, he would join three-time Champion Aaron Roy (Yellow Grass, Saskatchewan) and two-time Champion Zane Lambert (Ponoka, Alberta) as the only riders to win the national title in multiple seasons.

As the only other rider to be flawless, Buttar first rode Cabo (Eno Bucking Bulls) for 76 points in Round 1, declining an offered re-ride.

Buttar then drew a bovine athlete in the championship round he has covered five times prior in as many attempts – Tykro Pound Sand (Wild Hoggs/Corey Chmelnyk).

Most recently, the Kindersley-native rode the striking bull for 86.5 points during the 2020 PBR Canada Finals week in Grande Prairie, aiding him in clinching the year’s Canadian Championship.

Remaining perfect against the two-time PBR World Finals bucker, Buttar once against reached the 8, this time marked 85.5 points.

Unranked prior to the event, Buttar is now the No. 5-ranked rider in the race for the PBR Canada Championship, 16 points behind No. 1 Coverchuk.

Attempting to accomplish a feat never before achieved, should Buttar repeat as the national champion in 2021, he would become the first rider in league history to win the honor in back-to-back seasons.

Ostashek delivered the second-best score of Round 1 when he rode Money Dance (Vold Rodeo) for 83 points. His hopes, however, of his first event win since 2015 came to a heart-breaking conclusion in the championship round when he was dispatched by Sam Crow (Flying High Rodeo Co.).

His 1-for-2 showing earned him 13 national points, elevating him to No. 6 in the national standings, 19 points back of the No. 1 position.

Backed by a 78.5-point ride atop Look’n At U (Vold Rodeo) in Round 1, Tanner Eno (Coronation, Alberta) was fourth, collecting 7 national points.

Eno is now No. 7 in the PBR Canada national standings, 25 points behind No. 1 Coverchuk.

Rounding out the Top 5, and the final rider to reach the 8, Griffin Smeltzer (Claresholm, Alberta) was fifth.

The 21-year-old recorded his score in the opening round, covering Bloody Sunday (Foley Bucking Bulls) for 77 points.

Smeltzer left Coulee Creek Farms having earned 5 national points. He rose one position in the national standings, now tied for the No. 8 rank, 26 points back of No. 1 Coverchuk.