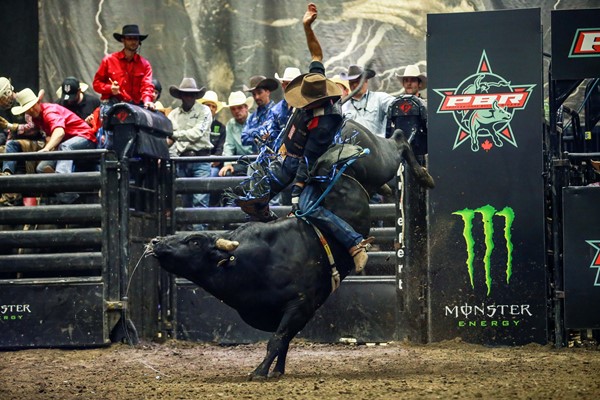 TORONTO – After more than three months away from competition, PBR Canada’s Monster Energy Tour (MET) is poised to resume its schedule October 6 when the cross-Canada series bucks into Winnipeg, Manitoba for the second consecutive year.

After visiting three cities in the country’s eastern provinces, the Winnipeg stop will mark the first of a three-event push for the tour in the Western half of the country, culminating with the Canadian Finals on October 20-21 in Saskatoon, Saskatchewan.

The MET launched its second season as a unified tour in electric fashion, hosting the PBR’s first-ever international Major event in Québec City, Québec on June 2-3.

Marking the league’s first visit to the city, the event offered both an increased purse, $100,000, and world point payout to the winner, 300. Every other MET event features a total purse of $20,000 and awards the winner 80 world points.

Adding to the significance of the event, the international Major featured a draw that included four of the Top 10-ranked bull riders at the time: No.4 Derek Kolbaba, No.5 Chase Outlaw, No.6 Jess Lockwood and No.8 Matt Triplett.

After sweeping the first two rounds and delivering a perfect, 3-for-3 performance, 21-year-old Kolbaba claimed the event title earning $34,100 Canadian dollars and 300 points towards the world standings, moving him to No.3 in the world rankings.

"It's a great feeling to be over here and have the success that we did," Kolbaba said after the event.

"If you're not coming to this event you're crazy. You've got great bulls, a great atmosphere and the money is awesome. It was a great event."

While second and third place at the event were claimed by invitees Lockwood and Fabiano Vieira respectively, Jordan Hansen, in fourth, was the highest finishing Canadian.

After visiting Québec, the tour next travelled to the country’s capital, Ottawa, Ontario on June 9 for the second event of the season.

While he bucked off both his draws at the season launch event, Pacific, Washington’s Cody Casper struck gold in Ottawa, earning the first PBR event win of his career.

Advancing to the short go via buckoff time, the 24-year-old performed under pressure, riding Captain for 88 points in the short go to claim the event title.

“It was cool, definitely overdue,” Casper said of his win. “But things come around, you’ve just got to practice and put in the work.”

Tisdale, Saskatchewan’s Justin Lloyd, who finished 14th the weekend prior after riding Wild Mexican for 81.5 points in Round 1, was the stop’s highest finishing Canadian in second.

After breaking for a week, the tour concluded the eastern portion of its schedule in Toronto where Lloyd became the first Canadian to win a MET event in 2017.

Riding Otis for 86 points in Round 1, Lloyd returned to arena center at the end of the event for the first time since 2013 when he won the first event of his PBR Career.

“It’s been a while,” Lloyd said in the initial days after the win. “I’ve had a lot of seconds, last year I had [four], so I knew it was going to come, but you hope it never takes that long.”

While Kolbaba is a fixture on the elite Built Ford Tough Series (BFTS), currently ranked No.5 in the world, both Casper and Lloyd are anticipated to ride when the Monster Energy Tour returns to action next Friday, October 6 in Winnipeg.

For Casper the tour resumes on the heels of the second event win of his career. The American rider took the event title at the final Touring Pro Division (TPD) event of the season in Magrath, Alberta on September 21.

Action in Winnipeg for the PBR Monster Energy Tour presented by Circle K gets underway at 8:00 p.m. CT at Bell MTS Place and tickets are available at Ticketmaster.ca.