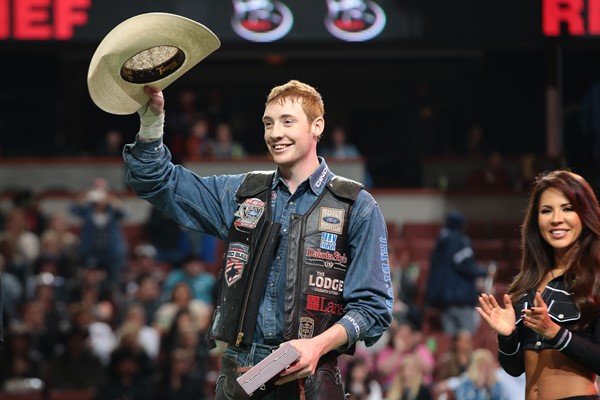 Tanner Byrne won the first elite tour event of his career in Anaheim in 2016. Photo by Andy Watson/Bull Stock Media.

NEW YORK CITY – As the elite tour prepares for its fifth event of the season, three Canadian riders will make the trek to The Golden State for the Anaheim Invitational: Tanner Byrne, Jordan Hansen and Dakota Buttar.

And with the fifth event of the season comes the ever-looming cutline set to impact the draw starting next weekend.

Per PBR regulations, the Anaheim Invitational will mark the final guaranteed event for riders ranked No. 31-35 in the 2017 world standings. The California stop is also the last event that alternate riders will be selected based on 2017 and 2018 world standings.

Beginning next week in Kansas City, Missouri, five draw spots and any alternates for the 25th PBR: Unleash The Beast will be based on the 2018 world standings.

Set to be impacted by this are both Byrne and Hansen.

Prince Albert, Saskatchewan’s Byrne is currently ranked No. 58 in the world and will be out of injury exemptions following this weekend’s event.

Earning his lone world points of the season in New York City, taking home 45 points for his 15th place effort, Byrne presently trails world leader Dener Barbosa by 825 points and is in need of 103.33 points to crack into the Top 30 to best position himself for a chance at earning an alternate spot and avoiding the cut line.

After not competing in Chicago or Oklahoma City, Byrne returned to the 25th PBR: Unleash the Beast last weekend in Sacramento, going 1-for-3 to finished 22nd.

Bucking off his first round bull, Pearl Pistol, at the 3.42-second mark, the 25-year-old rebounded in Round 2, covering Gangster Can Do for84.25 points.

Byrne, however, wasn’t able to make the 8 again at the event, dispatched by Hurricane Hustler in 2.54 seconds in the third round.

In Anaheim, the 2015 PBR Canada Champion will face Evan Matthew’s Angry Elf in Round 1.

For the bovine athlete it will mark his debut on the league’s premier series, with just one other out on his record, a 3.02-second buckoff of Aaron Williams at the January Real Time Pain Relief Velocity Tour event in Oakland, California, according to Probullstats.

The city of Anaheim is of extra sentiment for the Canadian, with the Honda Center playing host to  the first elite tour victory of Byrne’s career in 2016.

In front of more than 25,000 fans that attended the three day event, Byrne went a perfect 4-for-4 to become the first Canadian-born bull rider since 2003 to win an elite tour event.

A month later, Byrne returned to the top of the shark cage at event’s end, winning the Duluth Invitational.

Much like Byrne, the cutline will also soon impact Hansen who enters the Anaheim Invitational No. 67 in the world, 836.67 points behind Barbosa, and in need of 113.33 points to crack the Top 30.

Absent from the past two events in Oklahoma City and Sacramento, Hansen last competed on the elite series in Chicago where he finished 11th to earn 33.33 world points. In the Windy City he was 86 points aboard Slinger in Round 1, before bucking off Inferno (5.54 seconds) and Bad Beagle (1.98 seconds).

The Okotoks, Alberta rider will face Julio Moreno/Dallas Schott’s Circuit Breaker in Round 1 inside the Honda Center.

Since making his PBR debut in 2017, the bull has record 10 outs across all tours, and has been ridden just three times.

On the elite tour, no rider has yet to cover the bull in his two trips, bucking off Brennon Eldred in 3.19 seconds in his first event in San Jose last season, and most recently sending 2017 PBR Rookie of the Year Jose Vitor Leme to the dirt in 7.07 seconds at last weekend’s stop in Sacramento.

Unlike his two countrymen, Buttar concluded the 2017 campaign No. 26 in the world, guaranteed eight events before being subject to the cutline.

However, for the fast-rising Canadian his fast start to the season has cemented him well within the Top 20 of the standings, currently No. 16 in the world and 552.5 points behind Barbosa.

On the heels of a successful three event stretch, which saw him improve his finish week-to-week, lead the event heading into the Championship Round twice, and record both a career-high ride (88.5 points aboard Bottoms Up during Round 2 in Oklahoma City) and world ranking (No. 10), Buttar was shutout in Sacramento.

Bucking off all three of his draws in the main event, Catfish Clinger (3.50 seconds), Mortimer (3.30 seconds) and Acting Crazy (5.95 second), Buttar was also failed to make the whistle in the first 15/15 Bucking Battle of his career, dispatched by Pearl Harbor in 2.65 seconds.

Looking to rebound in Anaheim, he has drawn D&H Cattle Co. / Moe & Rusty Bandy’s Bandy’s Bad Boy in Round 1.

Making his 2018 elite tour debut last weekend, Fabiano Vieira rode the bull for 85.75 points to tie for seventh in Round 2.

In the bull pen, Blue Stone, raised by the Flying High Rodeo Co. of Elnora, Alberta, bucking with D&H Cattle Co., is the lone bovine athlete with ties to Canada, slated for Round 2.

In Round 1, West and Johnston have both drawn bulls from Cooper Bucking Bulls, Butch and Slim Ice, respectively.

The 25th PBR: Unleash The Beast Anaheim Invitational gets underway with Round 1 on Friday, February 2 at 7:45 p.m. PT, followed by Round 2 and the Championship Round on Saturday, February 3 at 6:45 p.m. PT.