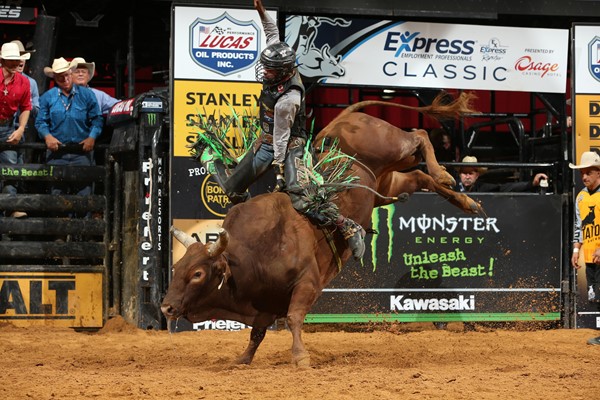 Lonnie West rides Bill Henson/Gene Owen's Lefty for 87.5 during the championship round of the Tulsa PBR 25th: Unleash the Beast. Photo by Andy Watson / BullStockMedia.com

In just his second appearance on the elite tour, the Cadogan, Alberta native improved upon his eighth place effort during his debut in Billings, riding to a fourth place finish in Tulsa.

The 22-year-old used an 85.75-point trip aboard Real Gun in Round 1, followed by a career-high 87.5 point ride on Lefty in the championship round to earn his first Top-5 result on the elite tour.

After competing at a Touring Pro Division event in his home country, tying for third in the Coronation Royal Rumbull, West, now a contender for the Rookie of the Year title, heads to Nashville for his career-first PBR Major.

RELATED: West Could Become First Canadian Rookie of the Year

In the first round of the bracket, West will attempt Shark Bait in a matchup against Nathan Burtenshaw who has drawn Mr. Valentine.

Shark Bait has been ridden just once in 18 attempts across all levels of competition. Last bucking at the elite tour event in Columbus, the bovine athlete dispatched Colten Jesse at the 4.13-second mark. The event was his second premier series stop of the season, first bucking in Duluth where he narrowly edged Joao Ricardo Vieira, sending the Brazilian to the dirt in 7.79 seconds.

Leading the three-rider contingent from Canada in Nashville is No. 13 Dakota Buttar.

While the Kindersley, Saskatchewan native failed to record a qualified ride in the main event last weekend, he continued to soar to new heights in the Sooner State, finishing fourth in the 15/15 Bucking Battle.

The effort was the first time the 25-year-old had recorded a qualified ride in a 15/15 Bucking Battle, marked 87.75 points on Hedoo.

In the first round of the Nashville event bracket he’ll attempt Uncle Gangster in a battle against Edgar Durazo who has drawn Big Country. Uncle Gangster has yet to buck at the elite tour level, but is unridden in two outs.

Rounding out the trio is No. 23 Tanner Byrne, who, much like Buttar, did not record a qualified ride in the Express Employment Professionals Classic last weekend.

A four time competitor in Nashville, Byrne’s best finish came in back-to-back seasons (2015 and 2016) where he was 13th. Last season, as he battled injury, he failed to record a qualified ride.

In the opening round, Byrne has drawn Baby Boy in a head-to-head showdown against Matt Triplett who will attempt Mr. Majestic.

The Music City Knockout, presented by Cooper Tires is the fourth, and final, Major event of the season, featuring the long bracket-style format of the season.

The 36 riders will compete head-to-head in the bracket-style event until one rider is remaining.

Seeding is based upon the current world standings and the riders have been assigned to compete in one of three different brackets.

The fourth bracket has been deemed a Second Chance Bracket. This region will be based upon the Top 8 individual ride scores or buckoff times from the riders eliminated through the first four rounds of competition.

The eight eliminated riders will have a second opportunity to work through the Second Chance Bracket to earn a spot in the Final Four with the three riders who win Brackets A-C.

*Riders may be seeded higher than their actual world ranking because of injuries to No. 30 Brock Radford and No. 32 Emilio Resende.

The Top 12 riders in the world standings competing in the event have received a first-round bye for the 36-man tournament.

Event Champion:  The Head-to-Head Bracket Winner (625 points).  The rider who advances through the bracket system and defeats his opponent in the final head-to-head match.

Event Runner Up:  The Head-to-Head Runner Up (220 points).  The rider who loses in the final head-to-head match.

Final Four Qualifiers (125 points each):  Each of the four riders advancing to the Final Four.

Elite Eight Qualifiers (105 points each):  The six riders advancing to the Elite Eight in the competition brackets.

Sweet 16 Qualifiers (50 points each): The 12 riders advancing to the Sweet 16 in the original competition brackets (Round 3).

*Riders who advance through the Second Chance Bracket will not receive points or money unless they advanced to Round 4 as outlined above.

There is a total of 2,995 points available at the Music City Knockout.

The Music City Knockout gets underway in Nashville, Tennessee at Bridgestone Arena on Friday, August 17 at 7:45 p.m. CT , concluding on Saturday, August 18 at 6:45 p.m. CT.

Fans will also be able to watch the action in its entirety live via PBR’s new streaming digital platform RidePass. The listen LIVE stream for the two-day event will begin on Friday, August 17 at 8:45 p.m. ET, and Saturday, August 18 at 7:45 p.m. ET. On-demand replays will be available at 8:00 a.m. ET the next day at www.ridepass.com. The service can be found at www.ridepass.com, and in the Apple App and Google Play stores under the listing of RidePass.