West Could Become First Canadian Rookie of The Year 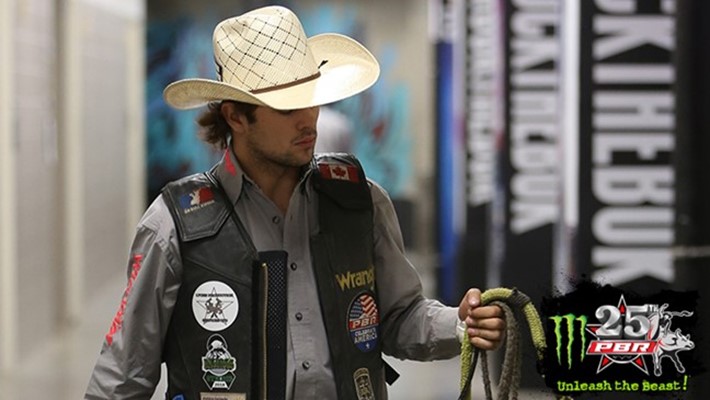 Lonnie West made his premier series debut in Billings, Montana in April and has since vaulted into Rookie of the Year contention. Photo: Andy Watson/BullStockMedia.com.

NASHVILLE – Lonnie West peered out toward the crowd at the BOK Center last weekend in Tulsa, Oklahoma, and pulled out his iPhone.

The 22-year-old was quickly caught having a rookie moment as he took a panoramic photo to send to some of his friends and family back home in Alberta.

“They are pretty excited back home,” West said with a rookie gleam.

Whom was he kidding, though?

West was pretty jacked up as well to be at the highest level of professional bull riding.

He couldn’t help but smile as he got ready to help fellow Canadian Dakota Buttar during the 15/15 Bucking Battle.

“I am pumped,” West admitted. “I was just telling Tanner (Byrne) this is where I want to be. I have dreamed of it. I have watched all of my heroes come through the ranks. Now I am riding with them here. This is absolutely where I want to be.”

West used a career-high 87.5 points onduring the championship round to finish a career-best fourth overall (2-for-3, 205 world points) in Tulsa.

The event was only West’s second since making his debut in April in Billings, Montana.

West is now officially in the running for the PBR Rookie of the Year title by jumping up to No. 24 in the world standings.

“I haven’t really at all thought about it,” West admitted. “I don’t even know how it works.”

Once informed of how a rider becomes eligible for Rookie of the Year by being ranked in the Top 30, West responded, “Heck yeah.”

No Canadian rider has ever won the PBR’s top honor for a rookie.

“That would be nice to stack on if a guy could make a run at that,” West said. “That would be a damn good goal to shoot for. Yeah there is still plenty of ground to cover. It is a race.”

West is competing in Bracket C of the head-to-head bracket event. He has a first-round matchup against Nathan Burtenshaw. West has drawn Shark Bait (3-0, PBR UTB), while Burtenshaw will look for 8 seconds aboard Mr. Valentine (1-0, PBR UTB).

Tulsa was another solid outing from the Canadian, who had finished third in Whitecourt, Alberta, at the PBR Canada Touring Pro Division event last Friday night.

West’s third-place finish in Whitecourt was the finale of an impressive summer run that featured him earning over 350 points towards the world standings before Tulsa.

“I won third there and I rolled into here with some momentum,” West said. “We have been staying healthy for the main part. A guy gets in riding shape and not much changes.”

West arrived in Tulsa on roughly two hours of sleep, and added in an hour-long nap in Byrne’ hotel room, before riding Real Gun for 85.75 points in Round 1.

“He felt good,” West added. “He felt real explosive out of there. He was into my hand so a little advantage for me I guess. I had to work and stay aggressive the whole time.”

West then headed into the championship-round draft after bucking off Desperado (1.79 seconds) in Round 2, but he had no clue which bull to select.

The draft can be a daunting task for some first-year riders. Not necessarily because they are intimidated by the ranker caliber of bulls, but rather the unfamiliarity with who their options may be.

West began to ask some of his friends for any advice, and no one was sure whom he should go with.

That was until West had an epiphany.

Lonnie’s dad, Kevin, won the 1989 Calgary Stampede and helped mold Lonnie into the rider he is today.

Richardson had seen West around the past few summers, but it wasn’t until West decided to come south for the summer and compete in some Touring Pro Division events that the two, as well as Brock Radford, decided to hop in the truck and share hotel rooms together.

“That guy has been to the World Finals ever since he came over,” West said. “He is a super aggressive rider. Going down the road with him, you learn a lot from guys like him. Keeping things basic. It is the big leagues, but you don’t want to get to get too excited about it. Just keep thing simple. It is nice to have guys in your ear helping out.

“It is kind of good to have a coach like that.”

Richardson doesn’t pay any attention to stats or how the Rookie of the Year works, but the 25-year-old does know when he sees a good bull ride.

The two were in Livingston, Montana, two weeks ago when West spurred his way to 89.5 points on Cooper Tires Semper Fi.

It was only the 18th time in 91 career outs at any level of competition that Semper Fi had been ridden.

“He tries his ass off every time, but in Livingston he really looked good,” Richardson said. “That is a tough bull. Not many people ride that bull and he rode him easy.”

Both riders tied for third place on Wednesday night at the Coronation, Alberta, Touring Pro Division after splitting the Round 1 win with 85-point rides on Slick Cat and Done Talking.

RELATED: Aaron Roy picks up the win in Coronation

Richardson has developed tough skin during his seven-year career.

He has gone through various ups and downs and has clawed his way to the PBR Finals even when the odds seemed against him.

Richardson believes West has the mental fortitude necessary to handle the pressure of competing for one of the final World Finals spots during the stretch run to the PBR World Finals.

“He definitely does,” Richardson said. “It is a hard road. We had to go hard all summer to get where we are now. Now we are here and we are going to keep doing what we have been doing.

“We all know we are going to make it there.”