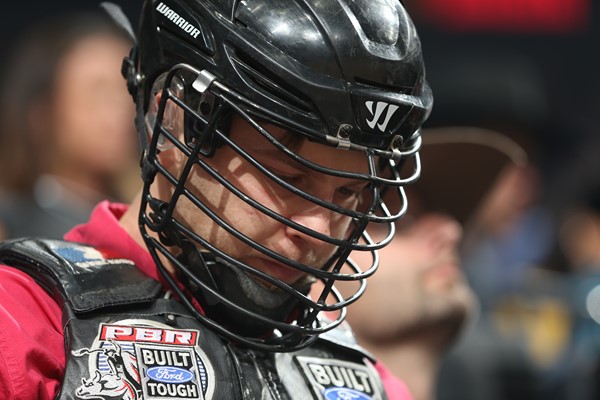 Dakota Buttar ranks No.10 in the PBR World Standings, his highest yet. Photo by Andy Watson/BullStockMedia

“For my first one, I drew pretty deep,” Buttar said. “I’m nervous, but I’m excited too.”

The Dakota Rodeo / Chad Berger / Clay Struve / H&C Bucking Bulls bovine athlete is annual contender for the YETI World Champion Bull honor. Pearl Harbor made his elite tour debut in August 2014 in Thackerville, Oklahoma and in his 39 outs since, has been ridden just four times.

According to ProBullStats.com, across his 53 out spanning all levels of competition, Pearl Harbor has been ridden a collective six times.

Pearl Harbor was last ridden by current world No. 1 Dener Barbosa for 89.5 points, receiving a 45.75-point bull score, during the Championship Round of the 2017 PBR World Finals.

With two outs on the 25th PBR: Unleash The Beast thus for in 2018, Pearl Harbor has once again established himself as a front runner for the year’s top bull.

He earned the YETI “Built for the Wild” Bull of the Event honors in his debut at the Chicago Invitational, marked 46 points for dispatching Derek Kolbaba at the 5.29-second mark in the Championship Round.

Most recently, in Oklahoma City, the bull sent Eduardo Aparecido to the dirt in 1.73 seconds, earning a 45-point bull score.

“The last weekend I seen he went to the left; I don’t mind him when he goes left,” Buttar said of the bull.

“He’s a little trickier though when he goes right, and quite a few times he’ll go back to the left if he starts to the right.”

“Hopefully I can make Pearl Harbor go left too.”

And while Pearl Harbor’s 2018 season is off to a fast start, so is Buttar’s.

The past two weekends he has sat atop the leaderboard heading into the Championship Round.

While unable to contend for the event title in Chicago, sidelined by a sprained neck and concussion sustained while dismounting his Round 2 bull Dream Catcher who he covered for 86 points, Buttar once again led heading into the final round last weekend in Oklahoma City.

His event began with an 85.25-point trip aboard Hy Test in Round 1.

“I love that bull,” Buttar said following the ride. “Hell, he was really slow and then he picks up good. He has so much timing. I just love that bull. I wish I could get him every time.”

The 2017 Glen Keeley Award winner followed that with 88.5 points on Bottoms Up, the first bull he attempted during his elite tour debut in Tulsa, Oklahoma on August 27, 2016.

Adding to the significance of the out, the score is the high-marked ride of Buttar’s career on the elite tour.

While unable to convert the lead into his second career win, bucking off More Big Bucks at the 6.41-second mark, snapping his four out ride streak, Buttar has steadily climbed the world rankings, where he now sits a career-best No. 10.

Through the first three events, Buttar has improved upon his overall finish week-to-week. After beginning the 2018 season for the 25th PBR: Unleash The Beast with a thirteenth place effort in New York City, Buttar was seventh in Chicago, and fourth in Oklahoma City.

“I’ve liked all my draws I’ve had the last couple of weeks. There were a couple that weren’t supposed to go left, but they went left, so I’ve been getting lucky too.”

In Round 1 in Sacramento Buttar has drawn Bridwell Pro Rodeos’ Catfish Clinger.

The out will mark the Red Bluff, California bull’s debut on the elite tour. Unridden across four trips at PRCA events, Catfish Clinger has been at just one PBR event prior, the April 2017 Real Time Pain Relief Velocity Tour event in Clovis, California. There Emilio Resende covered the bull for 84.5 points.

During the event’s second round, Buttar will face Julio Moreno / Dallas Schott’s Mortimer.

“I’ve got another good draw on Saturday, I’m not sure about the one on Friday, but I’m happy with the other one I got on Saturday.”

Bucking at elite tour events since 2015, Mortimer has been ridden in eight of his 14 outs. At the last premier series stop he bucked, in San Jose, California in October 2017, Lachlan Richardson covered him for 87.5 points in Round 2.

After a two week hiatus, Prince Albert, Saskatchewan’s Tanner Byrne will return to the elite tour draw using one of his two remaining injury exemptions after sidelined the majority of 2017, mainly due to a torn groin.

The 2015 PBR Canada Champion last rode at the season-launching, Major event in New York City, the Monster Energy Buck Off at the Garden.

Byrne tied for tenth in Round 1, covering Black Ice for 82.5 points. In Round 2, the 25-year-old improved upon his finish, landing fifth compliments of his 85.5-point trip aboard Switch Hitter.

Despite bucking off Black Rose and Inferno, in the third and championship rounds, respectively, Byrne finished tied for fifteenth overall, earning 45 world points.

Heading into Sacramento, Byrne ranks No. 52 in the world, 45 points behind the No. 35 ranked riders, Lonnie West and Lawson Nobbs.

In the first round of the Wrangler Long Live Cowboys Classic Byrne has drawn Walking Lazy J Bull Team’s Pearl Pistol set to make just his second appearance at a PBR elite tour event. In his debut last October in San Jose, the Escalon, California bull fell and Colten Jesse was awarded a re-ride.

Across his seven outs at all other levels of PBR competition, the bull is unridden through seven trips.

On Saturday, in Round 2, Byrne will face Dakota Rodeo / Chad Berger / Clay Struve’s Gangster Can Do.

The more experienced of his two draws, the bovine athlete has been competing on the elite tour since the 2016 PBR World Finals, where he bucked in Round 3 and 5, ridden in just four of his 14 outs.

While Claudio Montanha Jr. is the last rider to cover Gangster Can Do on the elite tour, riding the bull for 84.75 points during Round 2 of the October 2017 event in Nampa, Idaho, the bull’s last out came at the inaugural Global Cup in Edmonton, Alberta. There, Byrne’s countryman Brock Radford covered him for 82.75 points.

In the bull pen, Blue Stone, raised by the Flying High Rodeo Co. of Elnora, Alberta, bucking with D&H Cattle Co., is the lone bovine athlete with ties to Canada, slated for the Championship Round