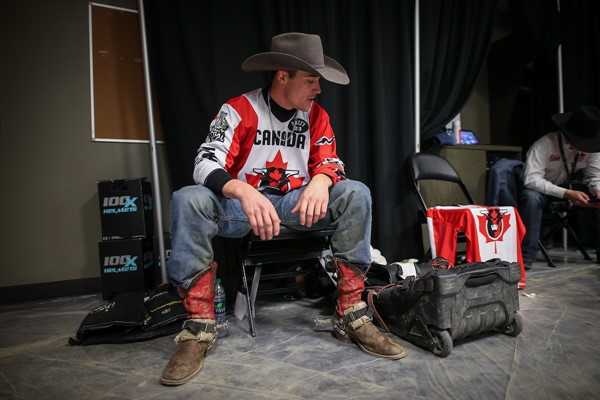 Lambert has competed at the past two PBR Global Cup's, helping Team Canada to third place finishes in both Edmonton and Sydney. Photo: Covy Moore/CovyMoore.com.

LAS VEGAS, Nevada – In three months’ time, the Olympics of bull riding will buck into AT&T Stadium for the 2019 WinStar World Casino and Resort Global Cup USA, the first edition of the nation vs. nation bull riding spectacle to be held on American soil.

When the world’s best riders and rankest bulls step foot, and hoof, inside the home of the Dallas Cowboys, Zane Lambert will be one of the eight riders representing the Maple Leaf as Coach Aaron Roy’s latest selection to Team Canada.

“Global Cup is the most prestigious event a Canadian bull rider can be a part of,” Lambert said.

“There’s the Canadian Finals Rodeo (CFR) here and then we have our PBR Canada Finals and World Finals, that’s the titles we try to win, but this is an invite, we take the best of the best, so it means a lot when you get the pick like that to be on a team like that from the other riders that you ride against so it kind of shows that they do respect you as a rider.”

Joining countrymen Tanner Byrne and Dakota Buttar who were selected to the contingent in August, Lambert similarly adds a wealth of past event experience to the roster, a key competitor at the Global Cup’s first two legs in Edmonton and Sydney.

“It’s pretty cool, it’s a pretty prestigious event to be a part of and to be a part of the Canadian event, and going the last three years is kind of outstanding,” he reflected. “To be riding now and get the opportunity to ride here for the third time in the Global Cup is pretty special and it means a lot to me.”

Hosting the first-ever edition of the event on home soil in Edmonton, Alberta, the two-time, and reigning PBR Canada Champion, added two scores to his nation’s total, a 81.5-points ride on Deep Water and 85.5-point trip on Darkness to help the Canadians to a third place finish.

This time, Lambert hopes to lead the Canadians to a higher position on the podium and hoist the U.S. horn from the glittering Global Cup trophy at the end of the two-day event.

“Hopefully we can win some money there and pull out a win for the Canadian bull riders and show the world the talent we’ve got here and the good riders that we do have per capita are outstanding,” he stated. “[It’s] pretty special there, and hoping to take care of business there.”

While Lambert is honored to receive the team selection again, he is also poised to potentially make history in the coming weeks as the first rider in history to win the CPRA and PBR Canada Championships in the same season.

“We’re just going to ride our bulls jump for jump,” he said of his plans for the next few weeks. “We’re going to be getting on the best bulls here in Canada, and that is when we test our guys and see what they’re capable of, and if I can end up on top that’s awesome.”

With four rounds of the CFR complete, Lambert is currently tied for sixth in the overall CFR event aggregate, and third in the season’s title race. He trails standings leader Wacey Finkbeiner by $14,154.13.

While the veteran rider covered his first two draws, making the 8 for 86.25 points on VJV Whiskey Hand in Round 1, and marked 84.25 points on Far Out in Round 2, Lambert was bucked off in the following two rounds by Flight Plan and OLS Tubs Nickle Package.

“For me, it’s every bull as an accomplishment, each one at a time,” Lambert continued.

With two events remaining on the PBR Canada schedule, the final Touring Pro Division event of the season in Yorkton, Saskatchewan on Nov. 9-10, and the PBR Monster Energy Canadian Finals, presented by Mac’s/Circle K and Dakota Dunes Casino on Nov. 23-24, Lambert is currently No. 8 in the PBR Canada national standings, 1,058.33 points behind No. 1 Lachlan Richardson.

Regardless of how the CFR concludes, Lambert could make further PBR history should he win the 2018 title, joining Roy as the only two riders to win the title three times. And with 2,250 points on the line during the two-day season culminating event, and him having made a similar comeback to win the title in 2017, the door is open for Lambert.

Regardless of how the numerous competitive milestones possibly on the horizon for Lambert unfurl, the 32-year-old is “blessed” having just welcomed his first child, a son, with wife Stacey.

“New baby came a week a few days ago now,” Lambert said. “The sleeps a minimum, but the baby is healthy and mom’s healthy, and when mom’s healthy I ride better, so the family is good and the household is good, so I can just take care of business and ride bulls.

“We’re blessed to have the little guy on the ground and with us here now, and he’s been my good luck charm so far, so let’s keep it going.”