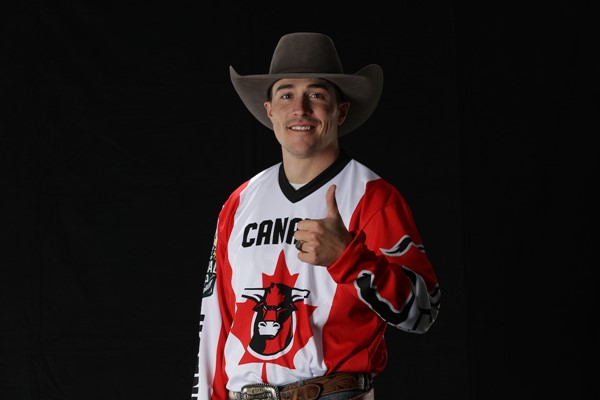 Zane Lambert brings past Global Cup experience to the roster, part of Team Canada in both Edmonton and Sydney. Photo: Andy Watson/BullStockMedia.com.

With the goal of improving upon third place results earned in both Edmonton and Sydney, Lambert joins the already announced Dakota Buttar (Kindersley, Saskatchewan) and Tanner Byrne (Prince Albert, Saskatchewan) as the first three riders on Team Canada.

Lambert, a two-time and reigning PBR Canada Champion, was instrumental in both of the Great White North’s bronze finishes. At Rogers Place in Edmonton he went 2-for-4, while in Sydney he was 1-for-2.

The event will mark Outlaw’s Global Cup debut. Despite being named to U.S. team that competed in Edmonton, Outlaw was unable to represent his country due to a dislocated shoulder sustained during the championship round of the 2017 PBR World Finals, just days prior to the Global Cup.

After returning to competition in June following shoulder surgery, Outlaw suffered numerous facial fractures following a wreck at Cheyenne Frontier Days which sidelined him for an additional 75 days.

Making his second comeback of the year, Outlaw has been seemingly unstoppable since returning to PBR events in October for the elite 25th PBR: Unleash The Beast stop in Milwaukee, Wisconsin. At the conclusion of the regular season for both the premier series and Real Time Pain Relief Velocity Tour (RVT), Outlaw had gone a collective 8-for-12, capped by a six-out ride streak, earning him 545 world points which propelled him from No. 76 to No. 35 in the world standings.

After a narrow defeat in front of a home crowd at the most recent edition of the event at Qudos Bank Arena, Cliff Richardson (Gresford, New South Wales) will join Troy Dunn’s (Bloomsbury, Queensland) Team Australia in the nation’s quest to avenge the heartbreaking loss.

After a 2-for-3 showing in Edmonton, helping to propel the nation to a fourth place finish, Cliff Richardson went a flawless 2-for-2 in Sydney where Australia was second, finishing 0.75 points behind event winners Team Brazil.

In 2018, Richardson has been dominant at PBR events Down Under, collecting three event wins and 14 Top-5 finishes, leading him to be a top contender for this season’s PBR Australia Championship.

Much like Australia, Coach Renato Nunes (Buritama, São Paulo) also selected a two-time Global Cup competitor, Jose Vitor Leme (Ribas do Rio Pardo, Mato Grosso do Sul), as his latest addition to Team Brazil. The 2017 PBR Rookie of the Year contributed two qualified rides to his nation’s third-place effort in Edmonton, while his 2-for-3 showing in Sydney was instrumental to the South American nation’s first-ever Global Cup victory.

Leme joins the Team Brazil squad with an impressive resume from the 2018 season, including his first-ever regular season 25th PBR: Unleash The Beast event win (Tulsa, Oklahoma) and 15/15 Bucking Battle victory (Milwaukee, Wisconsin), propelling him to No. 2 in the world standings at the conclusion of the regular season.

A veteran rider for the team, Durazo was 2-for-4 in Edmonton, but was unable to add to the nation’s total in Sydney.