No.4 – Lloyd Wins in Toronto 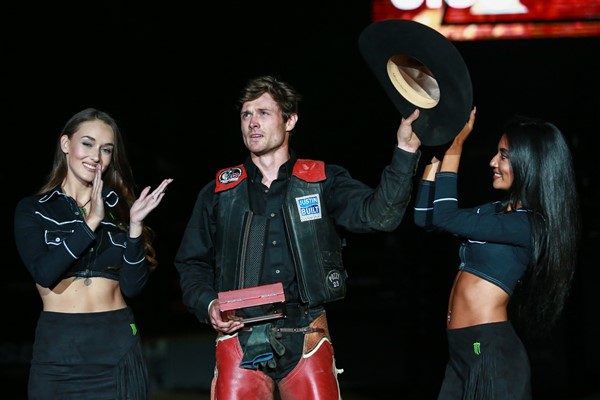 Justin Lloyd was the first Canadian to win on the 2017 Monster Energy Tour. Photo by Covy Moore / CovyMoore.com

TORONTO – Only 11 days remain before the beginning of the 2018 PBR Canada Monster Energy Tour. Before we begin year three in Calgary on March 24th, we look back at the Top-10 moments from the 2017 season.

Coming in at the No.4 spot is Justin Lloyd’s win at Ricoh Coliseum in Toronto, Ontario.

In the league’s first visit to the city, Lloyd’s win was the first by a Canadian on the 2017 Monster Energy Tour and his first since Lloydminster, Saskatchewan in October of 2013.

“It’s been awhile,” Lloyd said after the win. “I’ve had a lot of seconds, last year I had [four], so I knew it was going to come, but you hope it never takes that long.”

In the first round, the 29-year-old rode Mike Miller Bucking Bulls’ Otis for 86 points, tying his then high-marked ride of the season and propelling him to the event win.

The finish came just two weeks after Lloyd finished second in Ottawa, Ontario at the tour’s second event of the season.

For the win Lloyd earned $7,821 and 450 points towards the Canadian national standings, propelling him to No.4 in the nation, just 520.83 points back from the No.1 position. The Tisdale, Saskatchewan-native went on to finish the year No.10 in the Canadian standings.

“I think winning to me is a lot of times mental,” Lloyd said following the Toronto event. “You’ve got to believe that you’re going to win and that’s been one thing that I’ve been trying to identify, why I wasn’t winning. I did a lot of work on that and I think that’s what I can attribute this win to, is just being a lot more mentally prepared than I have been in the past.”

Lloyd also earned 80 points towards the world standings in Toronto, lifting him from No.60 to No.45, 72.91 points away from the No.35 spot of a coveted premier series berth at the time.

Less than three months later, Lloyd would make his debut at the PBR’s elite level, in Colorado Springs, Colorado, in September. In November he would be added to Team Canada at the PBR’s Global Cup in Edmonton.

Lloyd concluded the 2017 season ranked a career-best No.59 in the PBR world standings.

Stay tuned this week for the eighth entry in the countdown, No.3.