Radford Readies for Unleash The Beast Return in Nashville 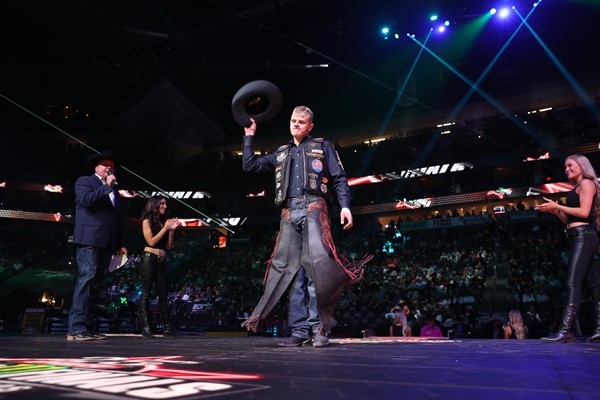 Brock Radford will ride on the Unleash The Beast for the first time in 2019 this weekend in Nashville. Photo: Andy Watson/Bull Stock Media.

NASHVILLE, Tennessee – After making his premier series debut in 2017, competing at three events, Brock Radford was poised for a record year in 2018, focused on both a PBR Canada Championship and World Finals qualification.

“Lots of the year left, lots of good events left,” Radford said. “The metaphor I was trying to explain the other day, it’s like you get to shoot ten baskets, but everyone hit five off the start, and now I’ve got to hit my last five, because I missed my first five shots.”

“A lot of guys are sore this time of the year and I feel like I’m starting to peak,” Radford explained. “I feel like I’m back to my old self, I’m feeling healthy. Every chance there’s going to be a double-entry bullet at these PBR Canada events, I will dang sure take it as long as I’m feeling good and healthy.”

“I’m covering a lot of bulls,” Radford stated. “So I figured I mind as well double enter the PBRs and give a run at Jared anyways, not make it too easy for him. Shay [Marks] and Dakota [Buttar] are up there too, and I want to get myself in the mix as well and just go bull for bull and see what we can do at the end of the year. “

However, this weekend, Radford’s campaign to return to his championship contending form will travel stateside as he is set to use one of his injury exemptions to ride in the fourth, and final, Major of the year in Nashville on Aug. 24-25.

“I feel good enough so I figured I mind as well go double down in Nashville and try to ride for $100,000 there too,” Radford said.

At this weekend’s event in Nashville, the winner is guaranteed a check for $100,000 and 625 world points, with one rider capable of earning as many as 1,250 world points. A $26,000 payday will also be up for the rider who logs the high-marked ride of the event.

“Hell, a guy does good at them big events, you’re in the mix for a world finals spot again. And with the points change, our Monster events, like Abbotsford and Edmonton and them, they’re big points. So there’s a lot of points left, you know the second half of the year can win guy’s titles and help guy’s make finals, or make or break them really.

“I got a good first half of the year last year, and didn’t get my second half really, and now I am getting my second half, and I just feel good and healthy.”