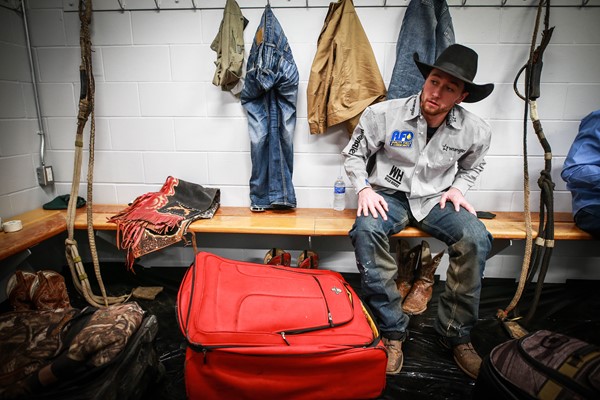 WINNIPEG, Manitoba – When Jordan Hansen climbs atop his first draw on February 9 inside AT&T Stadium for the first-ever PBR Global Cup on U.S. soil, it will be a moment two years in the making.

Despite being selected to the contingent for both the Edmonton and Sydney event, the Okotoks, Alberta native has been unable to compete, first due to a scheduling conflict with the CFR (Canadian Finals Rodeo) and then injury.

“It’s been a few years in the making,” Hansen remarked.  “I’ve been invited for all three of them, but this will be the first time I actually get to go and compete at it.

Hansen was most recently sidelined by a broken vertebrae and hip.

“It sucked,” Hansen stated. “Like someone shooting you in the foot with a nail gun probably.

“It sucked, but I mean its part of it though, the sport comes with injuries, so it’s part of it. You can’t really do much about it. It sucked watching, but I was still cheering for those guys everyday that’s for sure.”

In addition to sidelining him from the Global Cup, it limited the number of events he was able to attend throughout the entire season. In 2018, Hansen rode at just seven PBR Canada events, attending an additional three on U.S. soil, including two premier series events.

While the end finish was the same for the Canuck contingent when compared to their performance in Edmonton, it was a much closer race in the aggregate. At the inaugural event in Edmonton, Team Canada finished 188.25 points behind event winners Team USA.

Heading into the first-ever Global Cup on U.S. Soil, the contingent will look near identical to the Team Canada from Sydney, with Hansen set to be the lone new comer.

With Hansen the newest add to the team, fans will also watch Coach Aaron Roy may history as the first rider to both coach and compete. On the roster they fill the positions of Radford, sidelined by knee surgery, and Justin Lloyd.

“There’s a lot of good riders and a lot of consistent guys on the team,” Hansen continued. “Man I hope everyone just shows up, including myself. If everyone shows up riding good and staying consistent and just ride everything that they run underneath us.”

Awaiting Hansen is the event’s unique format where riders compete for national pride as opposed to individual glory. The shift, however, is what excites Hansen about the upcoming event.

“I think that’s going to be the biggest thing I’m looking forward to,” he said of the team format. “This is the first time ever not riding bulls for yourself, it’s a whole team event, and a totally different atmosphere. A lot of the time you are cheering for your buddies, but not as much as yourself.

“So this is where you’re cheering for your buddies just as much, if not more, than yourself.”

With the event less than three weeks away, Hansen’s 2019 season is in full swing, with one win already on his resume.

As one of four riders to go a perfect 2-for-2, the 25-year-old won the first Canadian Touring Pro Division event of the year in Dawson Creek, British Columbia.

Next on the docket for the 2016 CPRA Champion is the season-launch Canadian Monster Energy Tour event in Winnipeg, Manitoba on Saturday, January 26 at 7:00 p.m. CT.

Tickets are still available and can be purchased at Ticketmaster.ca or the Bell MTS Place Box Office. Fans can also tune into RidePass to watch all the action from the Winnipeg Classic LIVE.