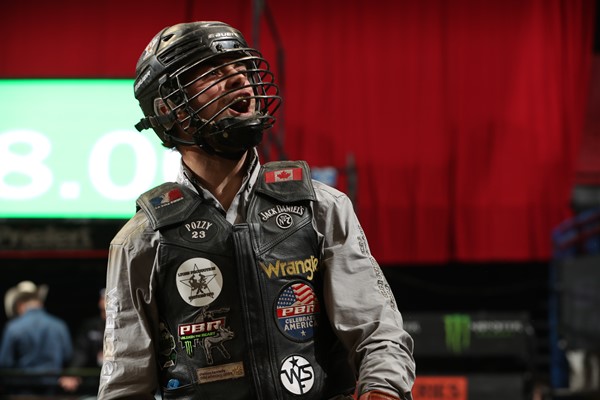 Lonnie West is one of three Canadians set to ride this weekend on the elite Unleash The Beast in Fairfax, Virginia. Photo: Andy Watson/Bull Stock Media.

FAIRFAX, Virginia – Just four regular-season, Unleash The Beast events stand between the Top 40 bull riders in the world and a qualification to the most prestigious event in bull riding – the PBR World Finals.

One of those stops, this weekend’s two-day Fairfax Invitational in Fairfax, Virginia.

After the majority of the Canadian contingent elected to ride at last weekend’s Canadian Touring Pro Division event in St. Tite, Quebec, as opposed to the elite tour event in Springfield, Missouri, three will be back with a vengeance this weekend in Virginia as they look to punch their tickets to the World Finals.

The trio of Canucks is led by two-time Glen Keeley Award-winner and world No. 27 Dakota Buttar.

Firmly embedded inside the Top 30, Buttar was granted an exemption from the PBR Competition Committee last weekend to ride in St. Tite. Not squandering the moment, the Kindersley, Saskatchewan native went a perfect 2-for-2, sweeping both rounds, to claim the event title and surge to the top of the Canadian standings.

The event win marked his league-best fifth of the season in Canada.

With Buttar not the No. 1 ranked rider in Canada as he seeks his first PBR Canada Championship, he can now turn his focus back to qualifying for the fourth PBR World Finals of his career.

Last season when the elite Unleash The Beast made its debut in Fairfax, Buttar was unable to compete due to the flu.

Much the same as Buttar will be making his debut on the campus of George Mason University, the event will also mark his bovine athlete counterpart’s first trip on record on the top tour.

Buttar will also be joined by Canadian No. 2 and world No. 36 Jared Parsonage in Fairfax.

With his season thus far highlighted by two wins on Canada’s premier Monster Energy Tour in Lethbridge, Alberta, and Halifax, Nova Scotia, Parsonage had led the Canadian standings the majority of 2019 until he was recently surpassed by Buttar.

While he is eager to reclaim his No. 1 ranking in Canada and earn his first PBR Canada Championship come Nov. 22-23 inside the SaskTel Centre in Saskatoon, Saskatchewan, this weekend his attention shifts to qualifying for the first PBR World Finals of his career.

On the bubble, Parsonage is just a mere 17.5 points outside of the Top 35.

The Maple Creek, Saskatchewan rider made his debut this January on the premier series in Glendale, Arizona, not competing again until the early-September event in Anaheim, California.

In both outings, the 26-year-old failed to reach the 8.

Most recently it was Rotten Bananas and Handsome Jack who got the better of him in California in 3.69 and 2.55 seconds, respectively.

In Round 1 of the Fairfax Invitational Parsonage will attempt Godzilla.

From Blake Sharp, the bull is unridden in four attempts on record. While his last two outs did not end in a qualified out, prior Godzilla had bucked off Ryan Dirteater (6.74 seconds – 42 points) and Cody Nance (3.42 seconds – 43.5 points) in back-to-back trips on the Unleash The Beast in Green Bay, Wisconsin.

Rounding out the Canadian contingent is No. 81 Lonnie West.

Once again competing in the draw courtesy of an injury exemption, fans have seen the Cadogan, Alberta native competing twice on the premier series already during the second half, after he began the year with a five-event run on the top tour.

Last riding in Anaheim, West rode Diamond Willow for 85 points in Round 1 before a concussion sent him to the sidelines for the remainder of the event. While he concluded the event 17th, it was outside of the points.

RELATED: West Remains in Title Contention Despite Slow Start to 2019

Despite the significant ground West needs to make up, he’ll carry momentum into the event after a third place effort last weekend on home soil at the Festival Western St. Tite.

One of three riders to go 2-for-2, alongside Buttar and runer-up Brock Radford, West rode Sleep Walk in Round 1 and Side Kick in the championship round, both for matching 85.5-point scores.

In Fairfax, as the second rider to leave the chutes, West will attempt Stealing Thunder in Round 1.

From J Bar W, the bull is unridden in one out on record.

Fans will be able to watch the action in its entirety live via PBR’s new streaming digital platform RidePass. Round 1 will be broadcast exclusively on the platform beginning at 6:30 p.m. EDT on Saturday, September 21. The listen live stream of Round 2 and the championship round will begin at 2:45 p.m. EDT on Sunday, September 22.

CBS Sports Network will broadcast all the action from Championship Sunday, including Round 2 and the championship round, on Sunday, September 22 at 6:00 p.m. EDT.