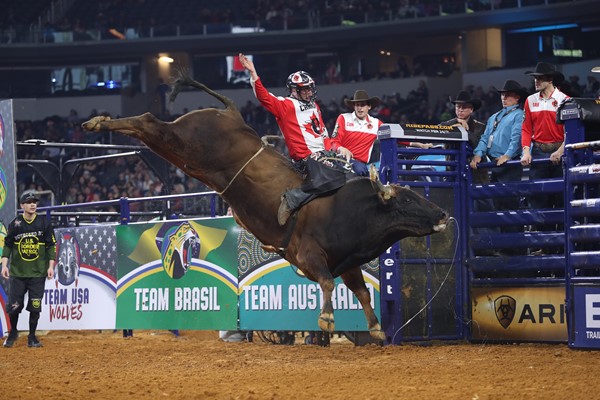 After a conflicting competition left him unable to compete on home soil for the inaugural edition of the event in Edmonton in 2017, Hansen was relegated to the sidelines for the 2018 PBR Global Cup Australia as he recovered from a broken vertebrae and hip.

Once inside AT&T Stadium, Hansen proved why he had been a perennial pick for the team.

Despite a 6.66-second buckoff from Jaywalker in Round 1, Hansen rebounded in the bonus round becoming the first, and only, Canadian to record a qualified ride on the opening night of competition.

Matched up with Bottoms Up, Hansen was marked 87 points.

“It took us a little longer than we wanted, but we got it done at the end,” Hansen said moments after the ride. “That is one of the few bulls I knew a little bit about. I was lucky enough [coach] Aaron [Roy] and the team had enough faith in me to put me on him. He had the first pick in that second round and I was happy to pull through for the team.”

Canada returned to AT&T Stadium for the final day of competition determined to reverse course, and Hansen left everything he had on the dirt in an effort to help the contingent achieve its ultimate dream of global dominance.

In Round 3, Hansen climbed aboard three bulls after earning re-rides for different infractions by Cool Customer and Lethal Larry.

Once atop Check It Out, however, the magic continued to flow.

Reaching the 8-second whistle, Hansen earned a score of 85 points, invigorating new confidence into his team.

Hansen once again received the nod from Roy to compete in the bonus round, however wasn’t able to add a third score to the nation’s total when he was bested by Legit in 3.49 seconds.

Despite the buckoff, however, Hansen contributed 172 of the nation’s 258 overall points.

RELATED: Hansen Leaves It All Hanging for Canada

“I let a couple slip by me that I shouldn’t have, especially that first day [with Jaywalker],” Hansen said following the event. “I feel like I should’ve rode that bull all day. Even today. [Legit] is an awesome bull, but that’s still one I feel like I can ride.

After being selected to ride for Team Canada at the most recent edition of the Global Cup in February 2020, Hansen, like the rest of the world, is now at home, eagerly awaiting for the sport to return.