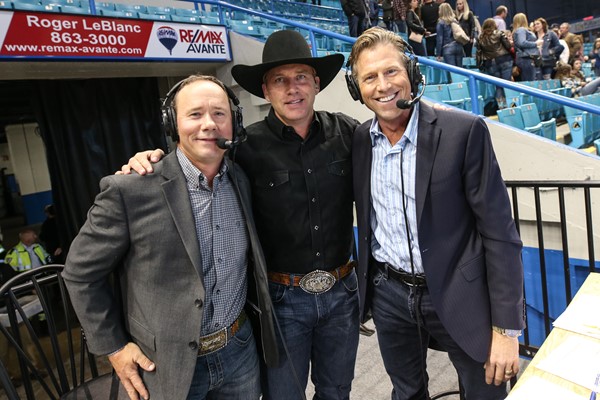 NEW YORK CITY – In the Byrne family, there is no shortage of individuals who have established themselves as history-makers in Western Sports.

Most recently Ryan’s youngest son Tanner Byrne historically transitioned from bull riding, to bullfighting, becoming the first man ever to have both ridden and fought bulls at the PBR Canada Finals.

However, one can’t forget Jesse and Tanner’s cousin Scott Byrne.

After initially pursuing a career as a bull rider, in 1995 Scott transitioned to bullfighting.

And ever since the initial moment when Scott first worked up the courage to ask Ryan for assistance in the switch, as Scott says, “the rest is history.”

Moreover in 2016, he not only won the Glen Keeley Memorial Award, but was also named the Canadian Cowboy of the Year.

The decision, however, to hang up his cleats, was not one that came easy, nor stuck on the first try.

“It wasn’t an easy one,” Byrne said of the decision. “I wanted to go out fighting the Canadian Finals Rodeo and the PBR Canada Finals. I wanted that to be the end. I knew I could probably go a few more years and be competitive and do my job, but I also had other things to get going on. It was just the right timing.”

“Tonight is a bitter sweet night for all of us who have over the last 20 years, had the honor and privilege of knowing this man,” Dave Poulsen said as Byrne entered the arena. “There is no better definition of a champion than a man who is willing to lay his life on the line for his friends.

“For two decades one man, this man, has done that. Becoming the most trusted lifesaver in the sport of bull riding. Every bull rider in this arena will attest to that. They know what it is to be hung up underneath a 1,500-pound bull, with menace and mayhem on his mind. The one helping hand, the one face they want to see has always been there.

“Tonight, we say goodbye to a friend, a teammate, to a champion. Everybody in sports dreams of going out on top. Today that dream is realized, because for the final time in his storied career we welcome into this arena the man from Prince Albert, Saskatchewan, Canada, the bullfighter, the friend, the champion, Scott Byrne. “

However, despite the sendoff, Byrne felt the itch to come back.

“Spring of 2016 rolls around and the rodeo and bull riding season starts,” Byre recalled. “After 20 odd years of doing it you are so programmed to be in certain places at certain times of the year. We had some of the east bull ridings starting up again, you talk about having to dig deep, I was having to dig deep to not bawl. It was frustrating and the thoughts of why did I do that, should I still be going.”

But then, an opportunity presented itself for Byrne to make a return.

About a month before the 2016 Calgary Stampede, and in response to PBR Canada bullfighter Brett Monea sustaining an injury, Byrne got a call to fill in and make a brief return.

“I willing to come back? I didn’t just say yes right away that I’m ready to come back. I thought was there someone younger, a spot am I taking? Probably yes. But at that time Calgary Stampede wasn’t willing to risk it with a rookie there that year. I knew I could do my job in my heart and mind.”

Answering the call to emerge from retirement, Byrne’s comeback was short-lived.

“Eighth performance, half way through the bull riding, it was cold and wet that day. It hit me like a rock and I thought, I am done. I don’t want to do this anymore,” Byrne detailed.

“People ask me all the time if I miss fighting bulls. I don’t miss fighting the bull, I miss the people the sights and sounds and smell. Blessing in disguise. You couldn’t write a script any better than that.”

For Byrne, however, his time away from the arena didn't last long.

In 2017 the now Manitoba resident made his TSN debut with the PBR Canada Monster Energy Tour as a color commentator.

“It was easy to be interviewed. I work at it all time, but interviewing someone is completely different,” Byrne said.

And while the 2020 PBR Canada season remains on hiatus, fans can relive all the action witnessed thus far, with the commentary from Byrne, today. Tune-in to RidePass at RidePass.com or via the mobile app.