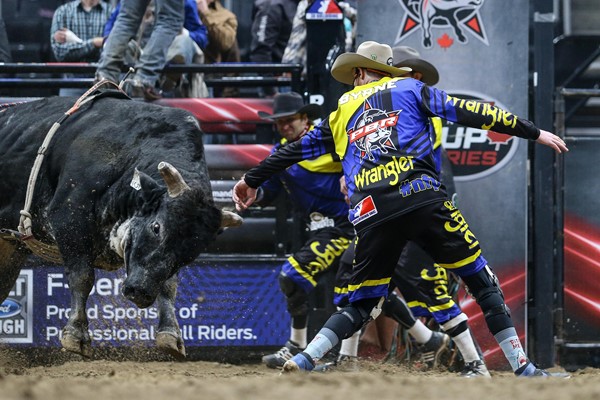 The 2022 PBR Canada Cup Series, presented by Wrangler, will get underway in Red Deer, Alberta, on June 11. Photo: Covy Moore/CovyMoore.com.

RED DEER, Alta. – It’s been nearly seven months since the last bull bucked for the 2021 PBR Canada National Finals, and the moment we’ve been waiting for is finally here!

This weekend, on Saturday, June 11, in Red Deer, Alberta, at the Peavey Mart Centrium, the 2022 PBR Canada Cup Series, presented by Wrangler, will get underway, as the race to be crowed the PBR Canada Championship readies to reach a new level of ferocity.

And if last season is any indication of what awaits us in 2022, we’re in for a real treat.

While two-time and reigning PBR Canada Champion Cody Coverchuk is still riding high from his come-from-behind push to clinch last year’s national title, Dakota Buttar, now in full health, is ready to once again challenge for the championship that narrowly eluded him last season.

The PBR Red Deer Classic, presented by Tsunami Water Solutions, will also feature a local flare. Hometown favorite Ashton Sahli is primed and ready to compete, presently ranked No. 15 in the national standings.

The bull pen is rank and ready to buck as well. Two-time and reigning PBR Canada Bull of the Year Happy Camper will headline the championship round, fresh off his fifth career appearance at the PBR World Finals.

Below are bullfighter Tanner Byrne’s bets for Round 1 of the event from Red Deer. Let us know your thoughts and your picks for the Cup Series event by tagging @PBRCanada on Twitter.

Tickets are still available for the PBR Red Deer Classic, presented by Tsunami Water Solutions, and can be purchased online at TicketsAlberta.com, at the Westerner Park Box Office, or charge by phone at 1-866-340-4450.

This is a rematch for Coy Robbins on the Skori Bucking Bulls’ Big Easy. He’s a big, yellow bull, 5-year-old this year, kind of coming into his own. Right in the gate to the right, into Coy’s hand. This is a bull that Coy has rode before. He has a little bit of suck back to him, just enough to sit you up on your rope. A perfect matchup for Coy to kick off his Cup Series campaign with an 84-point ride and set him up good to get him into that short round.

Blake Smith is returning from a successful winter on the Velocity Tour, he had a breakout winter, and made a name for himself in the U.S.. From experience, I know that gives you a lot of confidence when you come back to your home country and it helps you have success when you get home, as you had success on the world stage. Look for Blake to have a big year up here in Canada. The bull Langham Kid is a bull from the Two Bit Nation. The bull is fresh, all the Two Bit Bulls haven’t had a bunch of trips on them yet, so these bulls are going to be really fired up, and ready to go. This bull has a couple of different trips to him. Should be right in the gate, to the left, into Blake’s hand. Should be a round win, 86-87 points.

Dakota Buttar is coming off a less than ideal Edmonton, letting the Canadian Championship slip through his grips. Coming off that injury Buttar is back and healthy, feeling good. He hasn’t got the momentum rolling like he wants to at the Touring Pros at the start of the year, but he always steps up at the biggest stage, and these Cup events always bring out the best in Buttar. Look for him to do great things in Red Deer. The bull Blue North is another one from the Two Bit Nation. The bull, same thing, has a few different trips to him, but is always kicking and always up in the air, and one that when he has his day, you can be the round win on. Buttar makes these bulls look really good as well, so this could be 86-87 points as well.

Griffin Smeltzer is coming off the win at the Clunie/Cooper Memorial PBR in Prince Albert, his first stop back in Canada after a successful tour on the Velocity Tour this winter. Griffin is a guy that we’ve all been looking at for a few years now, and I think he is finally hitting that stride and we’re going to see how great Griffin really is. He just joined with the Austin Gamblers, and his confidence should be through the roof. I am not sure about this bull, he’s a young one from Darin Eno and the Eno family. Talking to Tanner Eno, he is just a calf, he sent me a video of him, he’s out there, around to the left, a lot of action, and one that should be really good for Griffin to get a score and set his Cup Series off on the right foot.

Cody Coverchuk vs. Beast of Burkenshaw

Cody Coverchuk is the reigning Canadian Champion. Doesn’t look to slow down one bit. Made his stateside debut at the Global Cup for Team Canada and rode one of the best bulls in the world, I’m Legit Too, right to 7.92 seconds. Coverchuk is riding good, feeling good. This bull he has been on before. I don’t know this bull all that well, but stats show he was an 82 on him. But Beast of Burkenshaw is a Lorne High bull, and these Lorne High Bulls, he brings them around when they’re young and that next year when you see them again, they are a total different bull. I would look for this bull to be a good one if Lorne has him on his trailer, and Coverchuk coming off his Canadian Championship, this could be a great matchup to get a good score.