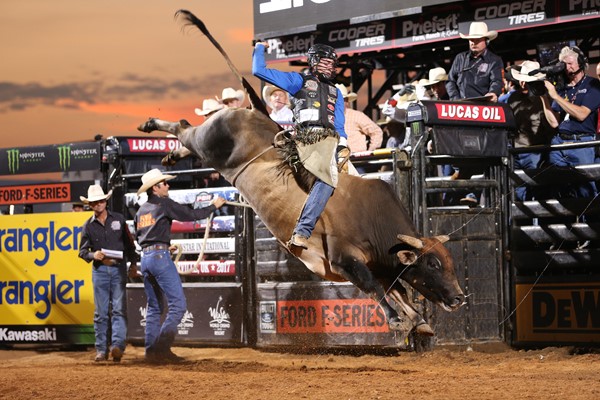 Tanner Byrne is out with the flu making Dakota Buttar the only Canadian bull rider this weekend in Albuquerque. Photo by Andy Watson / BullStockMedia

NEW YORK CITY – As the elite 25th PBR: Unleash The Beast heads west to Albuquerque, New Mexico for its three-day, Ty Murray Invitational, presented by Isleta Resort and Casino, both a Canadian rider and bulls are set to compete, while Canuck Jackson Scott will travel to Fresno, California with the Real Time Pain Relief Velocity Tour.

Known for attracting some of the league’s most enthusiastic fans, Dakota Buttar is once again poised to be the lone Canadian competing on the elite tour this weekend, with Tanner Byrne sidelined with the flu.

At last weekend’s Duluth Invitational, for the second consecutive event, Saskatchewan’s Buttar was shutout, going 0-for-2.

Inside Infinite Energy Arena, Buttar first bucked off Blake Sharp/Sharp Farm & Cattle/Rio Rojo Cattle Co.’s Mr. Jim in 2.08 seconds in Round 1, followed by a 5.48 second buckoff of JD Nix Rodeo Co.’s Runnin Through the Jungle for the second round.

Looking to reverse his fortunes, Buttar has drawn 5S/Martinez/Curreu Creek’s Kmag YoYo in the first round of the New Mexico event.

In seven attempts, the bull has been covered twice, most recently by Keyshawn Whitehorse for 87.25 points in his last trip during Round 2 in Little Rock, Arkansas.

His qualified ride came aboard Nailed, a fellow Canadian athlete, for 88.25 points in Round 2.

The Ty Murray Invitational’s bull pen will include five bulls with ties to Canada, led by Jane Clark/Gene Owen’s Seven Dust who is currently ranked No. 15 in the PBR’s YETI World Champion Bull race. Seven Dust is set to buck in the Championship Round.  Joining Seven Dust from the company’s pen, and set to buck in Round 3, is Moto Moto.

CBS Sports Network will televise all the action from Championship Sunday, including Round 3 and the championship round, starting at 4:00 p.m. ET on Sunday, March 18.

Fans will be able to watch the action in its entirety, live, via PBR’s new OTT platform RidePass. The stream for the three-day event will begin on Friday, March 16 at 9:30 p.m. ET, Saturday, March 17 at 8:30 p.m. ET and Sunday, March 18 at 3:30 p.m. ET. On-demand replays will be available at 8:00 a.m. ET the next day at www.ridepass.com. The service can be found at www.ridepass.com, and in the Apple App and Google Play stores under the listing of RidePass.

On the Real Time Pain Relief Velocity Tour, Kamloops, British Columbia’s Jackson Scott will compete as the lone Canuck at the Fresno, California event on March 17.

Scott has drawn Diamond Bar Cattle/Pasillas Cattle Co.’s Boogie Back to Texas in Round 1.