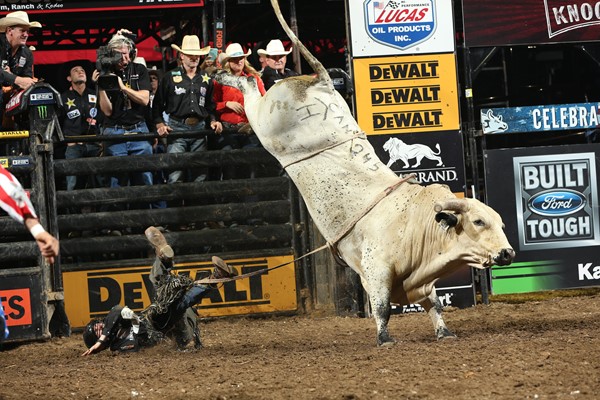 CALGARY – This weekend, Brock Radford and Dakota Buttar will represent Canada on the campus of The Ohio State University at the Schottenstein Center for the 25th PBR: Unleash The Beast’s Columbus Invitational, presented by Cooper Tires.

Buttar enters Columbus No. 15 in the world having earned Top 10 finishes at three of his past four events. In Billings, Montana last week, Buttar went 1-for-3 to finish seventh overall and earn $5,572.73 along with 95 world points.

The bulk of his points, 80 to be precise, came from his Round 1, third-best 86-point effort on D&H Cattle Co.’s Grey Ghost. This weekend, he faces Broken Arrow Bucking Bulls’ Blue Crush in Round 1 and M Rafter E Bucking Bulls’ Grey Goose in Round 2.

Blue Crush has been ridden once in four outs at the PBR’s elite level with the lone score being an 82.5 by Ramon de Lima in St. Louis in February of this year. Grey Goose makes his debut on Sunday with Buttar on the 25th PBR: Unleash the Beast.

On Saturday night concluding Round 1, Buttar has matched up with Dakota Rodeo/Chad Berger/Clay Struve/H&C Bucking Bulls’ I Always Stand in the 15/15 Bucking Battle, a bull ridden six times in 46 recorded outs.

Radford, the No. 40 man in the PBR’s world standings, faces the previously unridden Pink Cadillac (6-0 UTB) of Cornwell Bucking Bulls/White Trash Buckers/Pink Cattle Co. in Round 1. In Round 2 on Sunday it’s a dance with a debut bull in Gubber of Mike Miller Bucking Bulls.

In Billings, Radford went 1-for-3, earning 15 world points courtesy of an 85.5-point effort in Round 2 on High View Cattle Co./Wallgren’s Dream Catcher, concluding the event with a Top 10 aggregate finish. Columbus marks the 22-year-old’s third consecutive, and eighth overall trip to the PBR’s elite level.

Representing the nation from the bull pen Cooper’s Comet faces Brazil’s Lucas Divinio in Round 1 while the remaining four Canadian buckers: Black Rose, Stunt Man Ray, Bad Touch and Kick Out The Lights are slated for the Championship Round.

Bad Touch has a current buckoff streak of 36 outs across all levels of PBR competition and 21 at the elite level, which is the longest current active streak and one of the longest streaks in the history of the PBR. This is the bull’s first out since Kansas City in February.

The 25th PBR: Unleash The Beast is in Columbus, Ohio at the Schottenstein Center, located on the campus of The Ohio State University, on April 28-29. The Columbus Invitational, presented by Cooper Tires, begins at 6:45 p.m. ET on Saturday and 1:45 p.m. ET on Sunday.

Fans will be able to watch the action in its entirety, live, via PBR’s new streaming digital platform RidePass. The stream for the two-day event will begin on Saturday, April 28 at 6:45 p.m. ET, Sunday, April 29 at 1:45 p.m. ET. On-demand replays will be available at 8:00 a.m. ET the next day at www.ridepass.com. The service can be found at www.ridepass.com, and in the Apple App and Google Play stores under the listing of RidePass.