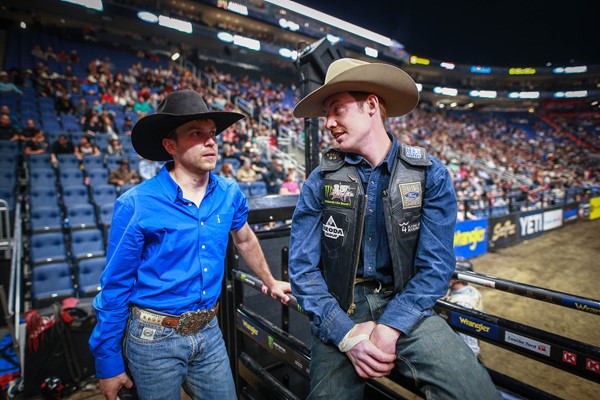 Dakota Buttar and Tanner Byrne are set to be the lone two Canadians competing at this weekend's 25th PBR: Unleash The Beast event in Springfield, Missouri. Photo: Covy Moore/CovyMoore.com.

NEW YORK CITY – After a two week break, the elite 25th PBR: Unleash The Beast will resume this weekend in Springfield, Missouri for the PFIWestern.com Invitational, presented by Bass Pro Shops, the final three-day, regular-season stop of the year, and site of the eighth 15/15 Bucking Battle of 2018.

Historically the Springfield event has played a key role in shaping the world standings race. This season is it the first of a seven-week event run leading into the 2018 PBR World Finals, Nov. 7-11 in Las Vegas at T-Mobile Arena.

With No. 33 Brock Radford (knee) and No. 28 Lonnie West (shoulder) sidelined by injury, No. 13 Dakota Buttar and No. 20 Tanner Byrne will be the lone Canadians competing in the third Show Me State Unleash The Beast event of the year.

While Kindersley, Saskatchewan’s Buttar is coming off of a 0-for-2 showing at the last premier series stop in Nashville, he is one of 13 riders within the historical 2,000-point window of the world No. 1 that is within striking distance of contending for the 2018 PBR World Championship. In the standings, Buttar trails No. 1 Kaique Pacheco by 1,882.5 points.

Last season in Springfield, Buttar failed to record a qualified ride going 0-for-3.

This year, he will first attempt Black Cadillac in Round 1 inside JQH Arena. The out will mark the Lyndon Flinn/Eli Flinn bovine athlete’s elite tour debut.

Competing at his sixth 15/15 Bucking Battle of the year, Buttar will face M.A.G.A. in the special round. The J.W. Hart bull is currently ranked No. 7 in the YETI World Champion Bull race, and has been ridden just once in 10 attempts across all levels of PBR competition.

The lone rider to cover the bovine athlete is Cody Teel who made the 8 aboard him for 89.25 points to finish third last month at the Tulsa 15/15 Bucking Battle.

Unlike Buttar, Byrne is riding a wave of momentum into Springfield, sixth in Nashville at the Music City Knockout, the fourth, and final, Major event of the season.

The Top-10 effort, his third of the season on the elite tour, netted the Prince Albert, Saskatchewan-native a check for $4,300 and 155 world points.

After beginning the event ranked No. 23 in the world, Byrne rose to No. 19. Electing not to compete during the two-week break between Unleash The Beast events, he enters Springfield No. 20 in the world, and 2187.5 behind No. 1 Pacheco.

Sidelined for last year’s event in Springfield due to injury, Byrne’s return to the Queen City of the Ozarks will begin with a faceoff against The King in Round 1.

Fans will be able to watch the action in its entirety live via PBR’s new streaming digital platform RidePass. The listen LIVE stream for the three-day event will begin on Friday, September 7 at 8:30 p.m. ET, Saturday, September 8 at 7:30 p.m. ET, and Sunday, September 9 at 4:45 p.m. ET. On-demand replays will be available at 8:00 a.m. ET the next day at www.ridepass.com. The service can be found at www.ridepass.com, and in the Apple App and Google Play stores under the listing of RidePass.