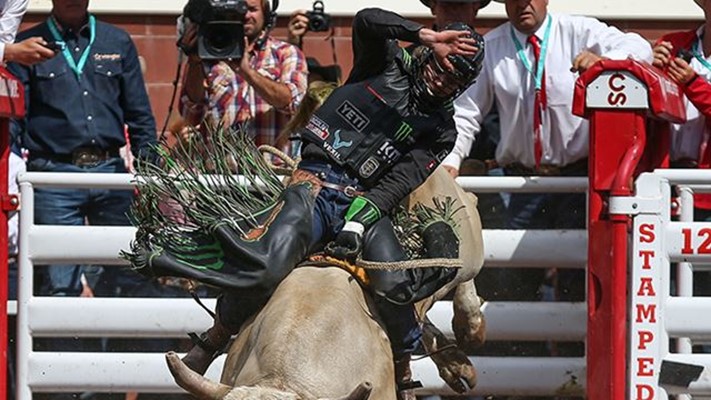 PUEBLO, Colo. – Derek Kolbaba’s return from a torn right ACL in March has been an uphill battle, but Kolbaba is finally starting to take small steps toward regaining his previous World Champion contender form.

Kolbaba rode Tippin’ Point for 86.5 points Tuesday at the Calgary Stampede to win the first day of Pool B competition.

Kolbaba earned $5,500 for his round-winning ride.

The 22-year-old has been competing at some various rodeos this summer to try and get himself back into peak riding shape after he tore his ACL in North Little Rock, Arkansas, on March 2.

He had bucked off his first 12 bulls back in PBR competition and admitted in Sydney, Australia, that the injury was giving him mental fits at times.

Kolbaba, who would have rode Cochise for $40,000 in Vinita, Oklahoma, if not for a slap last month, showed no ill effects from the injury on Tuesday.

The Walla Walla, Washington, bull rider is ranked 20th in the world standings and is 15-for-47 (31.91 percent) at all levels of PBR competition.

Another man that’s no stranger to injuries is two-time World Champion J.B. Mauney.

In his first event back at the Calgary Stampede since sustaining a career-threatening shoulder injury last year, Mauney finished second to Kolbaba with 85.5 points on Poker Chip.

The qualified ride was also Mauney’s first since returning to competition from a broken back he sustained on April 6.

RELATED: Mauney ready for his return to the Calgary Stampede

Jared Parsonage was a last-minute substitution for Trey Benton III on Tuesday, and the red-hot Canadian converted aboard Magic Show for 81.5 points and a third-place finish ($3,500).

Reigning Calgary Stampede champion Sage Kimzey placed fourth ($2,500) with 78.5 points on the back of Gangster Code.

Meanwhile, No. 3 Ramon de Lima turned down a re-ride option and kept his 74-point ride on Dense Fog for a fifth-place finish ($1,500).

Calgary is Lima’s first PBR event since helping lead Team Brazil to victory at the PBR Global Cup in Sydney.

Defending PBR World Champion Jess Lockwood and No. 4 Cody Nance both bucked off their first bulls of pool play.

Fans can relive all the action from day one of Pool B competition Wednesday at 10 a.m. ET on CBS Sports Network.