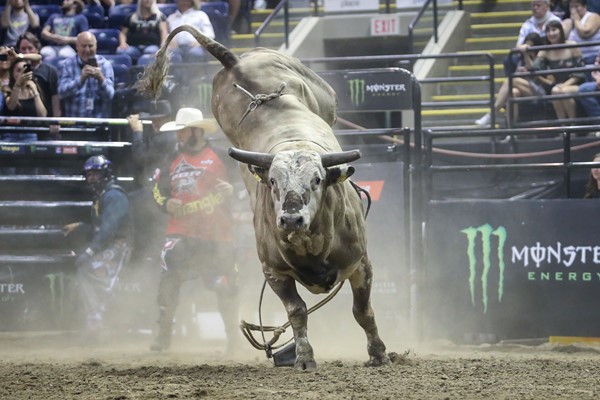 LAST STOP, EDMONTON – This weekend, for the first time in tour history, PBR Canada’s Monster Energy Tour will stop in Edmonton, Alberta at the Edmonton EXPO Centre for the Command Tubular Edmonton Classic, presented by Mac’s/Circle K. The event is the final regular-season Monster Energy Tour event prior to the PBR Canada Finals, and penultimate event across both the premier series and Touring Pro Division, prior to the 2018 PBR Canada Finals in Saskatoon, Saskatchewan on Nov. 23-24.

SO FAR THIS SEASON – With the tour’s fourth Western event of the 2018 season for the Monster Energy Tour set to take place in Edmonton, the already held seven events have played host to the rise of new faces. After young-gun Brock Radford kicked off the elite tour’s season with a win in Calgary, the series then travelled East for a four-event stretch. Beginning in Ottawa, fans watched on as 18-year-old Texan Austin Richardson went a perfect 2-for-2 inside the home of the Ottawa Senators to capture his first PBR event title. The following two weekends, however, belonged solely to surging Brazilian Marcos Gloria. Compliments of his wins in both Québec and Halifax, he surged to No. 30 in the world and catapulted to the top of the Canadian national standings. Concluding the slate of events, rising Canadian Lonnie West stunned the sold-out crowd in Moncton, going 2-for-3 to capture the title at the first-ever PBR event in the city. In Kelowna, Australian sensation Lachlan Richardson continued his strong summer surge going 2-for-2 to earn his first win on the tour. Collectively recording two event wins and 13 Top-5 efforts across both Canadian tours, Richardson is presently the No. 1 ranked rider in the Canadian national standings, 94.99 points ahead of No. 2 Radford, 666.66 points ahead of No. 5 West and 737.49 points in front of No. 6 Gloria. At the most recent event in Abbotsford, Jared Parsonage, the most consistent rider in Canadian competition thus far this season, swept both rounds to propel himself to his career-first win on the nation’s premier tour. He also rose into title contention, now ranked No. 4 in the nation, 578.33 points behind Richardson.

While West is out injured and Richardson and Radford are stateside competing on the PBR’s top 25th PBR: Unleash The Beast, the door is open this weekend for No. 3 Cody Coverchuk to surge to the top of the standings, just 138.33 points off the lead, or for Gloria and Parsonage to continue their meteoric rise up the rankings. Also competing in Edmonton, Zane Lambert, currently No. 7 in the standings and 1058.33 points behind Richardson, could be poised for a second-half run that mirrored his campaign in 2017 that culminated with the 2017 PBR Canada Championship, the second of this career.

RUN TO VELOCITY FINALS– With the 2018 PBR Canada Finals (Nov. 23-24) set to take place following the 2018 PBR World Finals (Nov. 7-11), the Canadian invite to the Real Time Pain Relief Velocity Tour Finals (Nov. 2-3) will be the top-ranked Canadian rider in the Canadian national standings as of October 29. With this weekend’s event in Edmonton playing host to the final opportunity riders have to earn points towards the national standings prior to the cutoff, the pressure is on to earn the coveted bid, awarded to Zane Lambert last year as the 2017 PBR Canada Champion. With the invite, the rider will compete alongside representatives from each of the other international territories, with the top finisher from the contingent subsequently earning a berth to the PBR World Finals. Last year, Brazil’s Jose Vitor Leme advanced via the Velocity Finals, then stunned the world in going a perfect 6-for-6 to capture the 2017 PBR Rookie of the Year honor and 2017 PBR World Finals event win.

Currently, the top contenders in the standings are No. 2 Brock Radford, No. 3 Cody Coverchuk, No. 4 Jared Parsonage and  No. 5 Lonnie West. Among the list, Radford is on the cusp of automatically qualifying for the 2018 PBR World Finals, currently No. 36 in the world and only five points outside of the Top 35. West also finds himself within the Top 35, currently No. 33 in the world, however is presently sidelined with a shoulder injury. With those two not competing this weekend, Coverchuk and Parsonage have the opportunity to gain ground in the race and inch closer to earning the coveted invite.

GLORIA PICKS CANADA – While he is currently ranked No. 35 in the world, this weekend, Edmonton resident Marcos Gloria will compete on the Canadian Monster Energy Tour, instead of at the 25th PBR: Unleash The Beast event in Nampa, Idaho. Despite being ranked inside the well-known threshold, only the Top 30 riders in the world are required to compete at a premier series event. With the 2018 PBR World Finals less than three weeks away, and 120 world points available to the winner in Edmonton, the 28-year-old is currently just five points ahead of No. 36 Brock Radford. Gloria, however, is no stranger to competing on the Canadian tours, currently ranked No. 6 in the national standings, 737.49 points behind No. 1 Lachlan Richardson. Earlier this year he became the first rider to win multiple events on the Monster Energy Tour, let alone in back-to-back weekends, when he took the titles in Quebec and Halifax. He will attempt Finning Hou's Deacon in Round 1.

PERFECT PARSONAGE – Last weekend Jared Parsonage captured his career-first Monster Energy Tour win, going a perfect 2-for-2, including wins in both rounds, to emerge victorious at the tour’s seventh event of the season in Abbotsford. His 8-secondefforts came aboard Muddy Water for 85.5 points in Round 1 and Ripped at the Seams for 87.5 points in the championship round. His flawless effort not only earned him 120 world points, propelling him to No. 51 in the world standings, but also 550 crucial Canadian points catapulting him to No. 4 in the nation. With two events left prior to the 2018 PBR Canada Finals, including this weekend’s stop in Edmonton, Parsonage now trails No. 1 Lachlan Richardson by 578.33 points as he looks to capture his first PBR Canada Championship. Set to compete inside the Edmonton EXPO Centre, he will attempt Wait For It in Round 1.

JUST LIKE LAST YEAR– Compliments of his win at one of the most recent PBR Canada events of the season, the prestigious Glen Keeley Memorial Bull Riding, two-time, and reigning PBR Canada Champion Zane Lambert finds himself in a familiar position he was at this time last season prior to his late surge up the national standings. Also winning the event in 2017, Lambert departed Stavely Arena the No. 4-ranked rider in Canada, 902.1 points behind Radford, who was also the nation’s No. 1 following the event. This season, when he departed the Stavely, Alberta venue, he had risen to No. 6 in the national standings, and trailed then Canadian No. 1 Brock Radford by 963.34 points. While the standings have shifted slightly with the Monster Energy Tour stop in Abbotsford being the latest event, Lambert is now No. 7 in the nation, and now trails No. 1 Lachlan Richardson by 1,058.33 points. With one Monster Energy Tour event and Touring Pro Division stop remaining prior to the Finals, where thousands of points are available, Lambert could be poised to capture his third national title and tie Aaron Roy for most won by a rider in PBR history.

TEAM CANADA – With the next date for the inaugural Global Cup set for AT&T Stadium in Arlington, Texas on Feb. 9-10, 2019, the contingent set to represent the Maple Leaf is still largely undecided. While three-time Canadian Champion Aaron Roy will return to lead the nation, and has already selected top-ranked riders Dakota Buttar and Tanner Byrne for the squad, five slots and the alternate position remain to be filled. With Aaron Roy making the journey to Edmonton for this weekend’s event, he will have yet another opportunity to evaluate some of the nation’s top talent. Among the contenders for selection riding this weekend are former Global Cup team members Zane Lambert, an integral member in both Edmonton and Sydney, and Jared Parsonage, one of the contingents top riders in Sydney where they narrowly fell short of the win. While Wacey Finkbeiner sustained a concussion on the first day of the event in Sydney, and Jordan Hansen was unable to compete in Edmonton (CFR) or Sydney (injury) despite being selected, both will be competing this weekend for Roy to scout. Other potential team selections competing this weekend are Cody Coverchuk, who rode as part of the team in Edmonton and is currently No. 3 in the nation, and Nick Tetz the current Rookie of the Year standings leader.

BULL PEN – This weekend’s bull pen will be led by Two Bit Bucking Bulls’ Happy Camper who has earned Bull of the Event honors twice so far this season. The bovine athlete first earned the honor in Calgary when he was marked 43.5 points for his 4.44-second buckoff of Jake Gardner. His second high-marked out came in Ottawa where his 0.93-second buckoff of Austin Richardson earned him a bull score of 44.5 points. Slated for the championship round, he is one of six bulls making the trip from Magrath, Alberta. Other bulls competing from the Berezay’s include Catch My Drift and Big John. From Thompson Rodeo Stock, Original Sin, the high-marked bull from Halifax, will also buck in Edmonton. The bovine athlete’s top marks, 44 points, came compliments of his 2.99-second buckoff of Matt Triplett. From Skori Bucking Bulls, Hanna Motors Two Point Oh, rounds out the group of bulls bucking in Edmonton that have earned high-marked honors so far in 2018. His top out came in Moncton when he was marked 43.5 points for bucking off Carlos Garcia in 6.51 seconds.

THIS WEEKEND’S FORMAT –This weekend’s Monster Energy Tour event in Edmonton will feature a field of 30 riders. To begin the night, all entered riders will attempt one bull each in Round 1. The Top 10 will then advance to the Championship Round where they will attempt one final bull in an effort to win the event title and part of the event purse.

NEXT UP – Following a one month break, PBR Canada’s Monster Energy tour will travel to Saskatoon, Saskatchewan, and the SaskTel Centre on Friday, November 23 and Saturday, November 24 for the 2018 PBR Canada Finals where the nation’s champion will be crowned. Action gets underway at 7:30 p.m. CST.

PROVIDING PROTECTION – The bull fighters on hand for this weekend’s event in Edmonton are Greg Loring Jr., Brett Monea and Ty Prescott.