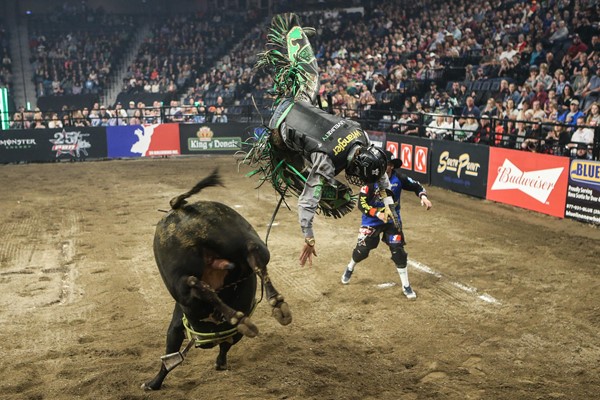 THE BULLS ARE HERE, MONCTON – This weekend PBR Canada’s Monster Energy Tour stops in Moncton, New Brunswick at Moncton Coliseum for the fifth event of the season, and first-ever PBR event in the city. The tour stop is the second of back-to-back events in the Maritime Provinces, with the Monster Energy Tour visiting Halifax, Nova Scotia last weekend.

SO FAR OUT EAST – With the tour’s final Eastern event of the 2018 season for the Monster Energy Tour set to take place in Moncton, the past three weeks have seen the rise of new faces. Launching the four-event stretch in Ottawa, fans watched on as 18-year-old Texan Austin Richardson went a perfect 2-for-2 inside the home of the Ottawa Senators to capture his first PBR event title. The following two weekends, however, belonged solely to surging Brazilian Marcos Gloria. Compliments of his wins in both Québec and Halifax, he surged to No. 30 in the world and is presently the top-ranked rider in the Canadian national standings, leading No. 2 Brock Radford by 132.5 points. With neither Richardson nor Gloria riding in Moncton, Radford could become the second rider this season to claim multiple wins on the nation’s premier tour, or another new face could emerge as a title race contender.

BULL PEN – Last weekend in Halifax, Thompson Rodeo Livestock’s Original Sin was named the high-marked bull of the event after he earned a 44-point bull score for his 2.99-second buckoff of world title contender Matt Triplett. Set to buck in the Championship Round inside Moncton Coliseum, Original Sin is one of three from the outfit. The stock company’s other bulls include Heaven Sent and Wait for It, bucking in Round 1 and Round 2, respectively. After he did not buck in Halifax, the bucking sensation from the Two Bit Nation, Happy Camper, will return to action this weekend in the Championship Round in search of his third bull of the event honors on the Monster Energy Tour. Other bulls to watch include Two Point Oh from Skori Bucking Bulls, who set a career-high bull score in Halifax, marked 43.5 points for his 3.02-second buckoff of Wyatt Gleeson, and Twisted from Vold Rodeo, who after bucking on the elite 25th PBR: Unleash The Beast in Billings, has wowed on the Monster Energy Tour, the bull of the event in Québec for his career-high and tour-leading 46-point bull score earned after he bucked off Brock Radford in 2.15 seconds.

THIS WEEKEND’S FORMAT –This weekend’s Monster Energy Tour event in Moncton will feature a field of 14 riders, all competing in two rounds, with the Top 8 advancing to the Championship Round where the event winner will be crowned. To begin the night, all entered riders will attempt one bull each in Round 1 and Round 2. The Top 8 based on the combined score from those two rounds will then advance to the Championship Round where they will attempt one final bull in an effort to win the event title and part of the $20,000 purse.

SYDNEY BOUND – Three members from the Team Canada contingent will compete this weekend in Moncton: Brock Radford, Lonnie West and Wacey Finkbeiner. Following the Moncton stop, the three Canadians will travel to Sydney, Australia where they will ride for the Maple Leaf at the second installment of the Global Cup on June 9-10. After finishing third at the first stop last November in Edmonton, Radford and West will return as team veterans, while Finkbeiner is a new face for the roster.

NEXT UP – PBR Canada’s Monster Energy tour will take a month break before next traveling to Kelowna, British Columbia, and Prospera Place on Saturday, July 7 for Okanagan PBR Challenge, presented by Westbank First Nation, Noralta Lodge, and Mac’s/Circle K, the sixth event of the season, set to begin at 7:00 p.m. PT.

PROVIDING PROTECTION – The bull fighters on hand for this weekend’s event in Halifax are Greg Loring Jr., and Bo Byrne.