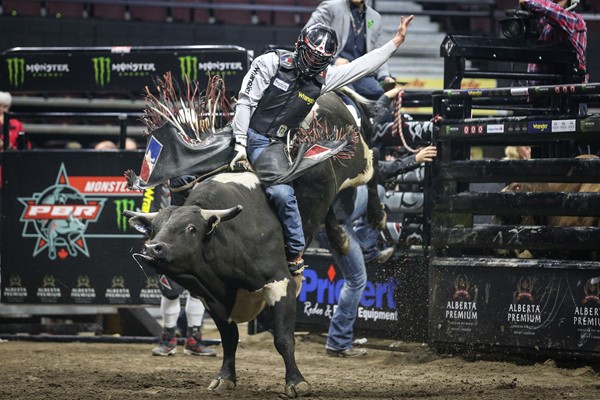 Zane Lambert rides Paint the Town in Round 1 from Ottawa. Photo by Covy Moore / CovyMoore.com

BULLS TAKE QUÉBEC – This weekend PBR Canada’s Monster Energy Tour, stops in Québec, Québec at the Videotron Centre, for the second-ever International Major, and third event of the season, the Canadian Iron Cowboy, presented locally by Couche-Tard. For the first time, Canadian fans will see an Iron Cowboy event, made popular in the United States for its thrilling bracket-style knockout competition format.

WORLD CHAMPION STATUS – This weekend’s draw is headlined by two PBR World Champions. One of two athletes to accomplish the feat, Silvano Alves is a three-time PBR World Champion, earning the sport’s highest accolade in 2011, 2012 and 2014. Making his PBR Canada debut in Québec, Alves is currently No. 27 in the world standings. At his latest event on the premier 25th PBR: Unleash the Beast, the veteran Brazilian was 10th at Last Cowboy Standing in Las Vegas, going 2-for-3. No stranger to the knockout-style format of the event, Alves has drawn Vold Rodeo’s Applause in Round 1. A familiar name from last season’s event, reigning PBR World Champion Jess Lockwood will return to Québec for a second consecutive year after finishing third in 2017, backed by a flawless 3-for-3 effort. Leaving Canada ranked No. 5 in the world standings, Lockwood went on to become the youngest PBR World Champion in league history, making a come-from-behind surge in the standings compliments of his historic three-round win streak to begin the 2017 PBR World Finals. Presently, the 20-year-old is ranked No. 8 in the world standings, 1,195 points behind No. 1 Kaique Pacheco.

BUTTAR AND BYRNE COME HOME – Staples on the elite 25th PBR: Unleash The Beast, Dakota Buttar and Tanner Byrne lead the Canadian contingent riding in Québec, both set to ride at the event for the first time in their careers. The top-ranked Canadian in the world standings at No. 13, Buttar will compete in his second Canadian event of the 2018 season amidst one of the best years of his career. Notably, the Kindersley, Saskatchewan-native recorded his first 90-point ride on the elite tour in late April, covering Inferno for 90 points to finish second in Columbus, Ohio. Collectively, Buttar has earned seven Top-10 finishes, twice leading the event heading into the Championship Round. In Round 1 he will face Wild Hoggs’ Pop The Latch. Former PBR Canada Champion Byrne makes the journey to Eastern Canada ranked No. 21 in the world on the heels of a strong weekend in Canada where he earned an event win at the Touring Pro Division’s stop in Nipawin, followed by a seventh place effort the following night on the Monster Energy Tour in Ottawa. On the elite tour, Byrne notable rode to the win in February in St. Louis, his third event title on the sport’s top series. In the opening round of the Canadian Iron Cowboy, he has drawn Triple R Bull Co.’s Punk Gun.

LOOKING FOR A REPEAT – Capturing the event win last season, Derek Kolbaba returns to Québec this weekend in an effort to defend his title. Kolbaba earned the win after he covered Funky Junk for 89.5 points to win Round 1, Time Bomb for 87.5 points to win Round 2, and Pneu-Dart’s Doomsday for 88.5 points in the Championship Round. Currently ranked No. 20 in the world standings, Kolbaba has battled injury in 2018, sidelined for six weeks by a torn ACL and MCL. Despite the brief pause in his season, the 22-year-old has recorded six Top-10 efforts, however heads to Québec amidst an eight-out buckoff streak. He will look to snap the skid in Round 1 with Wild Hoggs’ Myth Boy.

VETERAN VIEIRA – Returning to Québec after a runner-up effort in 2017, Fabiano Vieira travels to Canada ranked No. 12 in the world. The veteran Brazilian has made a recent surge up the world rankings, backed by an event win in Columbus, Ohio on the elite 25th PBR: Unleash The Beast. Thus far in 2018, Vieira has also earned a win at the Glendale, Arizona 15/15 Bucking Battle, in addition to 5 Top-10 efforts. At last season’s event, Vieira capped his flawless outing in the Videotron Centre with a 90.5-point trip on Handsome Jeff to win the Championship Round. The ride was the only 90-point trip of the season on the Monster Energy Tour. This year, Vieira has been 90 points or more twice, covering Rising Sun for 90.25 points to win the 15/15 Bucking Battle in Glendale, and Big Black for 90.75 points to propel himself to the event win in Columbus. He has drawn Vold Rodeo’s Flash Forward in Round 1.

PAST EVENT WINNERS – At the first-ever International Major in Québec last season, elite tour sensation Derek Kolbaba went a perfect 3-for-3 across the two days, winning both Round 1 and 2, en route to capturing the victory. Earning 300 world points, the victory lifted Kolbaba to No. 3 in the world standings. After leading the standings heading into his second PBR World Finals, the young gun concluded his second year at the sport’s elite level No. 2 in the world after winning a league-leading five events on the premier series.

ROOKIE’S PBR DEBUT IN HOME-PROVINCE – After competing at last year’s junior bull riding exhibition held in tandem with the Québec International Major, the province’s own Zac Bourgeois will make his PBR debut. A third generation cowboy, the now 18-year-old began his career when he was just 7 years old, winning 26 titles in the more than 10 years since.  In Round 1, he has drawn Vold Rodeo’s Darkest Days.

BULL PEN – Of the 34 bulls in Saturday's draw, all but eight come from Alberta. The Wild Hoggs, Thompson Rodeo, Nansen Vold, Skori Bucking Bulls and Two Bit Bucking Bulls have sent a liner load from out West for these four events. The remaining eight come from Maryland's Mark Reed. The bucking sensation from the Two Bit Nation, Happy Camper, leads the charge after picking up his fourth bull of the event title of the 2018 season, last Saturday in Ottawa. Also featured in this star-studded pen of bovine athletes is three-time PBR World Finals qualifier Minion Stuart from the Skori's. Another standout is Twisted from Vold Rodeo, one of the event’s final two bulls alongside Happy Camper. The bovine athlete made his debut at the PBR's elite level last month in Billings, Montana.

THIS WEEKEND’S FORMAT – The Monster Energy Tour Canadian Iron Cowboy, presented locally by Couche-Tard, will feature the first-ever bracket-style event in the nation. To begin the night, all entered riders will attempt one bull each in Round 1. The Top 8 will then advance to the three-round, knockout bracket where the last rider standing will be crowned PBR Canada’s Iron Cowboy. Should fewer than eight riders log a qualified ride in Round 1, the remaining bracket slots will be filled based on buckoff time.

The event will conclude with the Top 2 riders from the evening competing in the much anticipated showdown for the event title, in addition to their portion of the tour’s largest purse of the season. The event will award a total purse of $75,000 in prize money, with the winner set to receive a $20,000 bonus should he cover his final round bull.

NEXT UP – PBR Canada’s Monster Energy tour will next travel to Halifax, Nova Scotia and the Scotiabank Centre on Saturday, May 26 for the third event of the season. The event, set to begin at 7:00 p.m. AT.

PROVIDING PROTECTION – The bull fighters on hand for this weekend’s event in Québec are Dominic Roy, Ty Prescott and Greg Loring Jr.