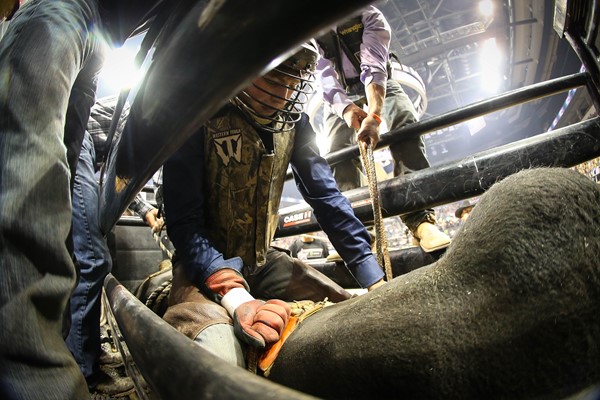 Jake Gardner was an alternate at the PBR Global Cup in Edmonton and competed on Saturday night. Photo by Covy Moore / CovyMoore.com

CALGARY, Alberta – One night after winning his first PBR event in Whitecourt, Alberta Friday night, Jake Gardner laid face-down and motionless in the dirt in Elnora.

“I watched the video, it did look pretty bad,” Gardner said of the wreck with Devour that left him unconscious.

“The night afterwards was pretty rough but the next day I wasn’t feeling too bad and today I’m not feeling too bad so it’s coming together,” said Gardner, who was not transported to hospital for further evaluations.

In this sport, some days a rider can be at his lowest, but others at the top of the world, like 22-year-old Garnder was after his first event win.

“It was really sweet,” Gardner said. “I drew two good bulls there in the long round and bucked off the first one. My re-entry bull I knew he was good, got him rode, got a good score there and then the short go was good. I seen Willy Wonka and I was pretty happy about that.”

Gardner began the event strong, winning Round 1 with an 85-point trip aboard Border King. In the championship round, Gardner knew he had drawn a bull in Willy Wonka that could continue his momentum and lead him to the event win. Earlier in the summer, Lachlan Richardson rode the Girletz Rodeo Co. bull for 89.5 points to win Day 1 of the Ranchman’s PBR BullBustin’.

“I had seen that so I remembered that bull from there and when I found out I got him I was pretty excited,” Gardner said. “I knew if I rode him I would get a good score and it would work out.”

Gardner’s recent success comes to the surprise of few, knowing his roots in the western lifestyle.

“I grew up on kind of a ranching/farming family background,” Gardner said of his Fort St. John, British Columbia home. “My dad, [Ed], he used to rodeo, he used to ride broncs, ride bulls and steer wrestle. I guess he kinda just brought be into it at a pretty young age riding sheep and then it kind of progressed from there.

“He put me on steers and I took a liking to it. I did other events too like roping and steer wrestling. I tried bronc riding, but bull riding has always been my favourite. I probably got riding junior bulls when I was 12. I’ve always had a liking to that and that’s always kinda been my main focus.”

Garnder, who is also ranked in the Canadian Pro Rodeo Association’s (CPRA) steer wrestling and all-around standings, looks to qualify for his first Canadian Finals Rodeo (CFR) in late October and make his way into PBR Canada’s Top 10.

“My dad is probably the one that got me into it,” Garnder said. “He’s been a big mentor and there’s been a lot of other people along the way that have helped me a lot.”

As for returning to competition after sustaining a concussion at the 20th edition of the Elnora Brahma Rama, the No. 14 man in PBR Canada is taking the proper precautions.

“I’ll keep in touch with Brandon [Thome], of the Canadian Pro Rodeo Sports Medicine Team (CPRSMT)] and go get worked on a little bit this week and see how I’m feeling by the end of the weekend,” Gardner said. “For the most part, these past few days I’ve been feeling pretty good. I’ve just been taking it easy and drinking lots of water. I’ll talk to Brandon and see when I should be good to go.

“If I don’t feel good enough to go this weekend I probably won’t go but I’m feeling pretty good and it’s only Monday so we’ll see what I feel like on Thursday.

“I’m not going to rush it, it all depends how I feel.”