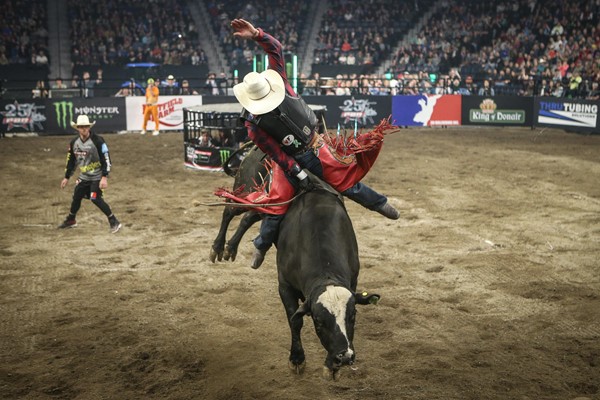 Wyatt Gleeson rides Catch My Drift for 83 points in Round 1 in Halifax. Photo by Covy Moore / CovyMoore.com

MONCTON, New Brunswick – What a run this has been. Never before have I been part of a tour like this with four consecutive weeks in four different provinces, which grows to five when including the Touring Pro Division.

We started out the first week of May in Prince Albert, Saskatchewan for the Clunie-Cooper Memorial PBR, a Touring Pro Division stop. The next week, on Friday May 11, half of the event crew and riders rode in Nipawin, Saskatchewan for another TPD event, making the journey less than 24 hours later to Ottawa, Ontario on May 12 for the return of the Monster Energy Tour. Over the long weekend, PBR’s second-ever International Major and first-ever Canadian Iron Cowboy took place at the Videotron Centre in Québec, Québec.

Last Saturday we were in Halifax, Nova Scotia for the first time in seven years. And finally, this week, we make our way to Moncton, New Brunswick for the first-ever PBR event in the city, pacing to be the tour’s second sellout of the season after Calgary made history in the Nutrien Western Event Centre.

Including a remarkable television deal with TSN, there have been a lot of firsts in the past few months for the sport of professional bull riding in Canada.

Tonight features two rounds of competition and a Championship Round of eight. A total of 120 world points and 550 Canadian points are available to win, in addition to the $20,000 in prize money.

Daylon Swearingen vs. 51 Smash and 454 All Business

This Piffard, New York bull rider has been to all three previous Monster Energy Tour events and connected in Halifax last week for sixth place overall and his first PBR paycheck in Canada. Swearingen comes highly regarded by entertainer Brinson Harris and currently ranks No. 90 in the PBR World Standings.

He’s drawn ideally in both Round 1 and 2. In Round 1 he faces the bull Zane Lambert was 83.5 on last week in Smash from Skori Bucking Bulls, who is ridden about half the time. In Round 2, the 18-year-old rookie faces All Business from Two Bit Bucking Bulls. In Québec two weeks ago, Australian Lachlan Richardson tamed the bovine athlete for 84.5 points.

Three weeks, three rides. That’s what it’s been like for Ulterra’s Night Vision from the Wild Hoggs. In Ottawa, Koal Livingston rode him to a score of 86 points. In Québec, Brock Radford scored 83.5 points and last week in Halifax Marcos Gloria won the event on the bovine athlete with 86.5 points. I see that number being four after Dayton rides him in front of a full house in Moncton. Whooty Blues was last tamed by Tanner Byrne in Ottawa for 82 points. Two good bulls and a great opportunity for the second-year pro.

Applause got Lonnie on the ground in Halifax last week but I wouldn’t expect to see that same thing happen again. Applause has been ridden once in three outs on this trip, by three-time PBR World Champion Silvano Alves in Québec. Coming off a second-place finish in Halifax, West’s just getting heated up for the Global Cup which he heads to on Monday. Speaking of heat, Southern Heat has been bringing it going 3-and-0 so far on the east-run. In Ottawa it was a 41-point out in a bout with Eric Isabelle hitting the dirt, 43 points was the result in Québec against Wyatt Gleeson and most recently Marcos Gloria was claimed victim in Halifax. West won’t have an easy route to victory but he can do it.

After relinquishing the No. 1 spot in the PBR Canada National Standings last week, Radford will be looking to get it back this week before he heads to Australia to represent our country. In Round 1 he faces Heaven Sent from Thompson Rodeo. In Ottawa this bull matched up with Lawson Nobbs, dispatching him in 6.9 seconds for a bull score of 42.5 points. In Halifax it was another buck-off, this time Jacob Moore. In Round 2 Radford has Pop The Latch from the Wild Hoggs, who button hooked Dakota Buttar in Round 1 of Canadian Iron Cowboy in Québec. There, the clock read 7.33 seconds. Lonnie West rode this one twice though in two outs at the Global Cup where the bull spun left, twice. Only behind by 132.5 points, he can take back the lead with a ride on either bull.

Warcraft from Mark Reed is 2-and-0 on this trip with a buckoff against Cole Young in Ottawa and Dayton Johnston in Halifax. He’s been ridden before for scores ranging from 81.5 to 84.5 points as recently as February on the stats. That’s Round 1, then there’s the three-time World Finals qualifier in Minion Stuart in Round 2. What more can a guy say about Minion? If you don’t stub your toe, you’re going to win money, but if you do, it’s probably going to hurt and you might get hooked.

Stop No. 5 of the PBR Monster Energy Tour begins at 7:00pm A.T. from the Moncton Coliseum.