No.9 – The Biever Breakout 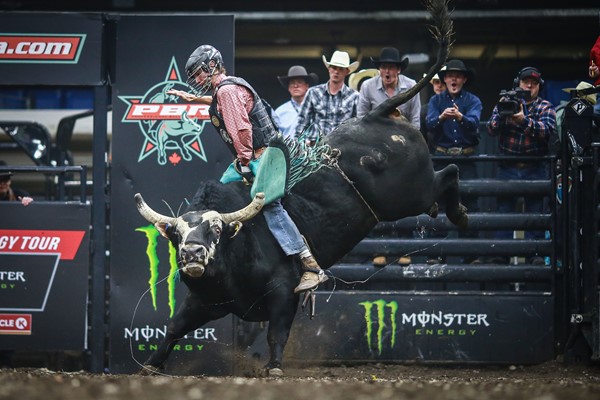 Logan Biever rides Minion Stuart for 87 points in the Championship Round of the 2017 Monster Energy PBR Canada Finals in Saskatoon. Photo by Covy Moore / CovyMoore.com

CALGARY – After a near five month break, just thirty days stand between fans and the first 2018 PBR Canada Monster Energy Tour event of the season in Calgary, Alberta on March 24. Before the tour’s third season gets underway, PBR Canada is looking back at the Top 10 moments from 2017.

Coming in at the No.9 spot is Logan Biever. The Claresholm, Alberta bull rider checks into this second entry on the countdown thanks to his breakout sophomore showing at the tour’s PBR Canada Finals in Saskatoon, Saskatchewan.

Biever finished third at the event as one of two riders to go 2-for-2 on the event’s final night.

In Round 2 Biever rode Open Season from the Wild Hoggs Bucking Bulls’ crew for 85 points, before making the 8 aboard three-time PBR World Finals Qualifier Minion Stuart from Skori Bucking Bulls for 87 points in the Championship Round.

This 87-point effort is a career-high marked ride for Biever, putting an exclamation point on his second season in a big way.

Overall, he was 2-for-3 at the Saskatchewan event, bucking off Tykro Checkered Flag, also from the Wild Hoggs during the event’s opening round.

Biever earned $2,426.94 in Saskatoon, 737.5 Canadian points and 30 world points to finish his second season ranked No.14 in the PBR Canada Standings, a marked improvement from the year prior when he concluded the 2016 season ranked No. 39 in the national standings.

Since the head-turning ride in October that drew the attention of many, Biever has gone on to represent his country at the PBR’s inaugural Global Cup in Edmonton, Alberta.

After helping his team to a third-place finish, he made his first trip stateside to New Town, North Dakota, in an effort to begin earning points towards the 2018 world standings on the Real Time Pain Relief Velocity Tour.

Since, Biever has taken time to reset and looks to return to action in Lethbridge, Alberta for the first PBR Canada event of the 2018 season on March 2-3.

Surrounded by an incredible set of people and the presence of a late-legend in Glen Keeley, look for even more from Logan Biever this season.

RELATED: Living The Life in the Presence of a Legend

Stay tuned next week for the third entry in the countdown, No.8.