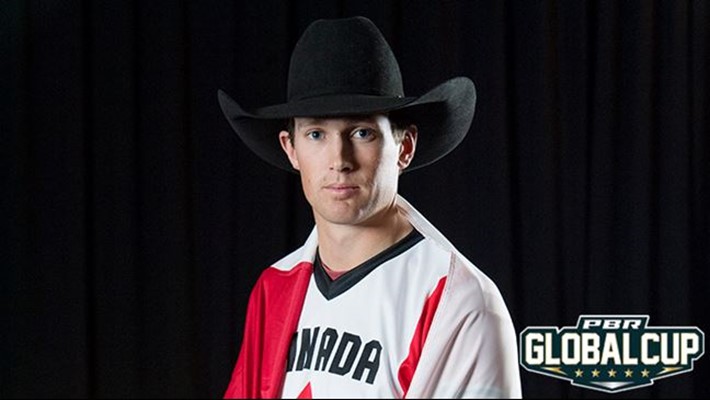 Jared Parsonage missed out on the first Global Cup in Edmonton, Alberta, but is making his presence felt in Sydney.

SYDNEY, Australia – Team Canada certainly had the advantage at the inaugural PBR Global Cup in Edmonton last November with seven extra riders, but the Canadians were still missing some of their best talent inside the Rogers Place Arena because of the Canadian Finals Rodeo.

One of those riders was current Canadian Pro Rodeo Association No. 1 bull rider Jared Parsonage, and the 25-year-old is quickly becoming a game changer for the Canadians this weekend at the Sydney Global Cup.

Parsonage rode Bring The Action for 82.25 points in the Bonus Round after previously riding Jack Rabbit for 68.5 points in Round 1, and Team Canada is well within striking distance of redemption in Sydney.

Team Canada heads into Championship Sunday fourth in the event, but only 107.25 points behind current leader Team Brazil (8-for-9, 662.75 points).

Fans can watch the conclusion of the Global Cup exclusively on RidePass beginning at 5:30 a.m. ET on Sunday, June 10.

Even though Parsonage wasn’t a member of Team Canada, it still stung him to see his home country lose the Edmonton Global Cup event on its home soil.

“Yeah, totally, it meant a lot to me last year, and I was pretty disappointed we couldn’t be there,” Parsonage said. “There was four or five of us that would have represented Team Canada very well and then we were disappointed we couldn’t be there. You know, we’re a small country, a small pool of bull riders, and we are close friends. Stuff like this means a lot to us.”

Parsonage had no major rodeo conflicts this time around, and now he is a key cog in Team Canada coach Aaron Roy’s bull riding machine.

The 6-foot-1-inch bull rider and Tanner Byrne have half of the Canadians' qualified rides as Team Canada is the only squad with two riders perfect in Sydney.

Byrne rode Annihilation for 79.5 points in Round 1 and 2016 PBR Australia Bull of the Year SweetPro’s Hillbilly Deluxe for 83.5 points in the Bonus Round.

Parsonage said it was a Team Canada strategy for him to turn down the re-ride option.

“We talked beforehand and we decided that we are going to get to 12 (rides), the idea is to get to 12 and then go from there,” Parsonage said.

Roy is happy to have Parsonage in the fold in Sydney.

“Definitely we were at a disadvantage (last year),” Roy admitted. “We had a bunch of young guys, and I believed in the young guys. They could do it, but you’re missing those guys (because of) that personal choice going to the rodeo finals. If we would have had them, it would have been a different story.

“Jared is a big sleeper. He hardly ever bucks off. He gets the job done every time, and he does it over 50 percent of the time. He’s a guy I lean on pretty hard for this team.”

He has qualified for three consecutive Canadian Finals Rodeos and finished fourth at the CFR when he was 22 years old.

This is Parsonage’s first trip to the Land Down Under.

“I’d like to win a CPRA title for sure,” Parsonage said. “But the PBRs have always been really good to me. I’ve had a ton of luck. I’m pretty consistent. I beat them in the average usually. I may not be in the 90s, but I can usually beat them with scores, so I get along with the bull ridings really well and stuff.”

Team Canada was the one team to get hit with the injury bug on Saturday night.

Dakota Buttar and Wacey Finkbeiner both sustained concussions in Round 1 and are questionable for Sunday, according to PBR Sports Medicine director Rich Blyn.

Meanwhile, Brock Radford is probable after sustaining a high left ankle sprain. Radford had his left leg crushed when SweetPro’s Turn It Up fell on him following his 80-point ride.

If Buttar or Finkbeiner are unable to ride, Team Canada alternate Justin Lloyd would be called into duty.

If both riders can’t compete, Roy would be able to give one of his six healthy riders a second long-round bull.

“We are definitely still in this thing,” Roy concluded. “It’s just stay on your bulls. It’s going to come down to whoever stays on the most bulls. We’re right in this thing.