West Heats Up Ahead of Cowboy Christmas 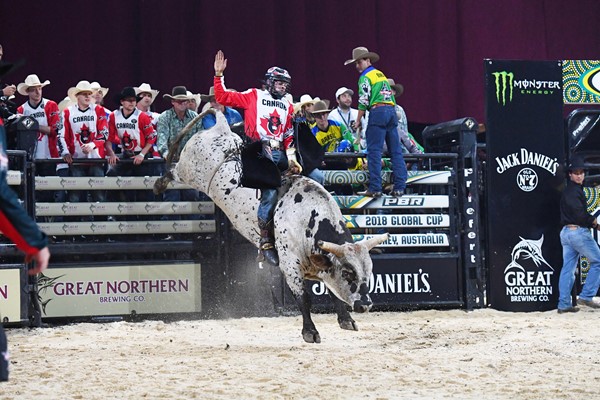 CALGARY, Alberta – While we may be in the middle of a two week break from PBR Canada competition, Lonnie West is taking no time off fresh off a trip to Australia for the nation’s Last Cowboy standing and the second leg of the inaugural Global Cup.

“It was good, [my] first time being in Australia. I had never been there before,” West said. “I got to meet a lot of new people. There’s a lot of good guys down there, everyone kind of welcomes you in.”

Abroad for more than two weeks, West first rode as a member of Team Canada at the Global Cup in Sydney, before traveling to Brisbane the following weekend for the Australian Last Cowboy Standing.

Currently ranked No. 33 man in the world standings and No. 3 in the Canadian rankings, the Cadogan, Alberta-native went a collective 1-for-3 in Australia between the two events.  His qualified ride in the nation came during Round 1 of the Global Cup, making the 8 on Mojito for 79.5 points, helping Team Canada to a third place finish.

“Bulls were quite a bit different, it was good to see that,” West recalled. “It’s just a little bit of an adjustment to make, they change it up a lot. A lot of direction changes a little more wild. They are built different. They were good.”

After a more than 14,000km trek home, West returned to Canada in time for Cowboy Christmas meaning non-stop action from now until the climax of the Calgary Stampede. For the likes of West and traveling partner Brock Radford, however, they have been on the run since at minimum the beginning of May.

“It felt like we had been flying back and forth for a month between all the East events and then flying right to Australia,” West said. “It didn’t really tire us out until we flew back.

“It was a long flight over there, but we had lots of time to rest up before the [Global] Cup so it wasn’t too bad that way.”

When he got home however, the travel had caught up.

“I got sick, I don’t think I was sleeping enough and things were catching up to me,” West stated. “[I] stayed home, went to Wainwright, we’re feeling good now so things have been rolling and we’ve been riding them anyway.”

With a slate of rodeos on his schedule before the return of PBR Canada competition, those three days off worked to recover paid dividends as West placed at all three events this past weekend in High River, Wainwright and Sundre.

PBR action resumes on July 2 in Cluny, Alberta for the busiest stretch of the season with six events in as many days, with the league collectively holding twelve events overall in July.

Looking back to the second leg of the PBR Global Cup, West noted how close the five-nation event finished.

“It was a slugging match the whole time,” West said. “We all had 12 rides, it was just a matter of higher scores and whatnot but we had a pretty solid team. Tanner [Byrne] really pulled through for us and Jared [Parsonage]. Tanner rode four, and I think Jared rode three, but yeah, everyone got a bull rode.”

And his first trip down under won’t be the last.

“Having all your buddies there, that you rodeo with over here so it’s not like where when you go somewhere else and you don’t know anyone, it’s not like we didn’t fit in,” West said. “The people in Australia, they treated us like family, everyone welcomed us in, showed us around. It made the trip that much better. I’d like to go back sometime.”

That next trip might be sooner than we think.

“We’re thinking about going back this fall, like right after our PBR Finals,” West said of the Monster Energy PBR Canada Finals presented by Dakota Dunes Casino, November 23-24 at the SaskTel Centre in Saskatoon. “We’ll have to choose between a couple events up here and a couple events down there.”

Next up for West, and friend Radford, are rodeos in Airdrie and Ponoka, Alberta followed by a stop in Williams Lake, British Columbia.

“It’s going to be busy but it’s the week everyone looks forward to,” West said. “We’re all riding good so it’s a good time to get hot, as long as we can stay healthy, things should go good.”