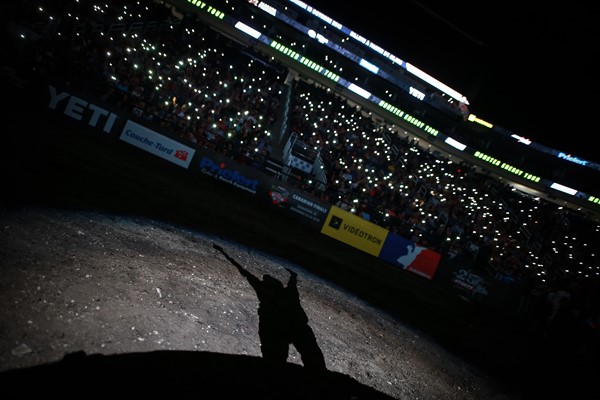 One rider has the chance to earn $46,000 CAD and up to 370 points toward the world standings in Québec. Photo: Covy Moore/CovyMoore.com.

NEW YORK CITY – The stakes will be high this weekend in Québec for the third-ever PBR International Major on May 4 at the Videotron Centre.

Just like most PBR Majors, the 20 bull riders in attendance will be competing for increased prize money in a unique format.

The fourth and final round will pit two cowboys head-to-head in a winner take all showdown with the rider who records the top score in that round crowned the Canadian Iron Cowboy. Should neither of the advancing riders record a qualified ride, the winner will be the rider with the highest aggregate score.

The 2019 Canadian Iron Cowboy is guaranteed a minimum $15,000 payout. However, the rider can take home an additional $20,000 bonus should he cover his final bull.

World points will be awarded in a similar manner, with the round points only given if a rider records an 8-second effort in that specific round.

For their overall event finish, the winner will receive a whopping 300 world points, and the runner-up will take home 120 world points.

In addition to world points, riders will also collect points towards the Canadian national standings, set to be awarded in a similar schedule.

In Rounds 2-4, all advancing have the opportunity to earn national standings points provided they reach the whistle. Each round winner will collect 100 national points, with the remaining positions set to earn the following:

For their overall event finish, each of the Top 4 riders will collect 140 Canadian points, while the runner-up will take home an addition 240 points and the winner netting 500.

Specific to the national points, one rider has the opportunity to net a total of 700 Canadian points, which will have a significant impact on the standings.

For Coy Robbins, Lonnie West and home province favorite Zac Bourgeois, who have yet to earn any Canadian points in 2019, a sweep would mean them going from unranked to well inside the nation’s Top 5.

RidePass will stream all the action from Quebec live on RidePass.com or via the mobile app starting at 7 p.m. ET on Saturday, May 4. Fans can also tune into TSN2 on Tuesday, July 2 at 7:30 p.m. ET for a one-hour highlights special of the event.