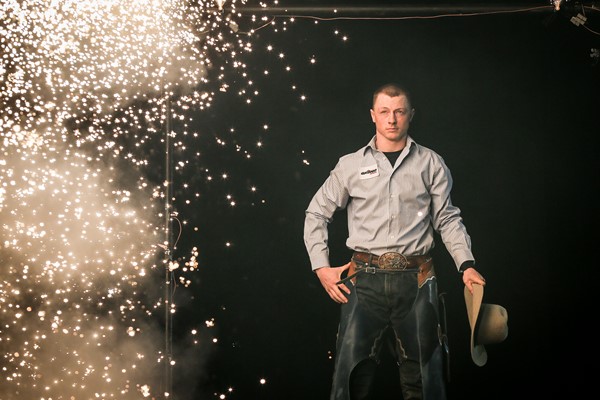 Currently ranked No. 3 in Canada, Marks returned to the elite Unleash The Beast in Nashville. Photo: Covy Moore/CovyMoore.com.

CALGARY, Alberta – He was an 18-year-old rookie the last time he made his way to ride under the bright lights and in front of the TV cameras of the PBR’s elite tour.

That time, he was invited based on an event win in the north-eastern Alberta community of Marwayne. It was his first win and, at the time, included an invite to the premier series.

Flash forward to 2019, and this time around, he was an alternate. Marks, however, was holding down the highest rank he’s ever held in PBR competition. At No. 43 on the planet, Shay Marks is having a career-year.

Before getting the invite to the PBR’s final major of the season, Marks was optimistic.

“It’s pretty exciting,” he said. “It’s definitely one you want to make it count at cause it’s a major. Huge points and yeah, could jump you way up there.”

It was one and done though in Nashville for Marks, bucked off by Red Snapper in 4.81 seconds in Round 1 of the Jack Daniel’s Music City Knockout, presented by Cooper Tires.

As of today’s writing, Marks, the Winnipeg event winner on Canada’s Monster Energy Tour, has earned 430 world points on the season so far, 165 behind No. 35 Scottie Knapp.

With just over two months of the season left and two Monster Energy Tour events remaining on Canadian soil, a berth to the PBR World Finals is a dream that’s within reach.

“That is what I am hoping for, that’d be a dream come true. But, yeah just keep going at it that’s the plan. It’s right there, just gotta keep pickin’ away,” Marks said of the events still on the schedule. “There are quite a few. So, just keep tryin’ to make points I guess.”

This year on the final day of the Monster Energy Canadian Finals in Saskatoon, Saskatchewan, in addition to receiving the coveted buckle, the Canadian Champion will also earn a $50,000 bonus.

“That was my mind kinda once I heard that,” Marks said. “That was kinda my goal, I was really shootin’ for, or have been shootin’, for is to win that. So that’s kinda what I am gunning for.”

With one rider capable of earning 2,250 points at the finals, it’s still anyone’s game.

“It’ll come down to the finals, there are so many points there,” Marks stated.

One advantage he may have, however, is the fact that both men he’s chasing, Parsonage and No. 2 Dakota Buttar, are on the verge of being on the PBR’s Unleash The Beast overtop of numerous Canadian events.

“Yeah you can’t be messin’ up against them,” Marks said. “I guess I am just lucky Dakota is always on tour. There is a good chance of that, it’s kind of a catch 22 if you’re off but, you know.

“Oh yeah, that’d be huge,” Marks said. “I’d be set up for the year, for sure. It would make things easier and a lot easier next year.”

Finishing a career-high No. 62 in the world in 2015, Marks regressed each year prior to his personal-best season thus far in 2019. Within that timeframe, however, Marks faced a shoulder injury and surgery which forced him to miss the entire 2018 calendar year.

“I haven’t had any problems. It’s been good,” Marks said. “I’ve been getting on so many bulls so much with rodeos and everything I haven’t been working out too much. I am pretty sore all the time, but I keep wearing that shoulder brace and I think getting on that much is keeping it pretty strong too.

“Sports med is helping out a lot, I’ve got no major injuries, just sore and nothing too bad.”