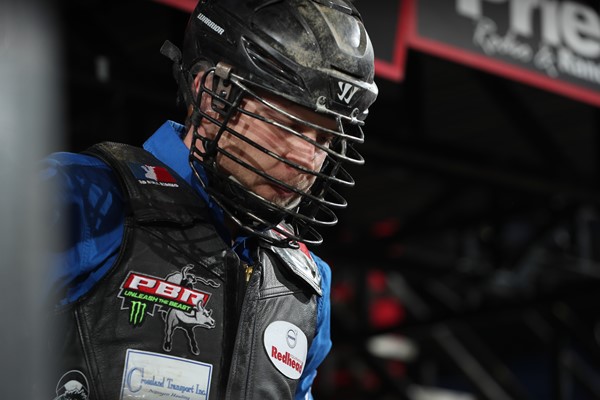 Dakota Buttar and Tanner Byrne will return to the Unleash The Beast this weekend for the Iron Cowboy, presented by Ariat. Photo: Andy Watson/BullStockMedia.com.

NEW YORK CITY – After the Canadian contingent of Dakota Buttar and Tanner Byrne were sidelined for last weekend’s St. Louis event by illness and injury, respectively, the duo will return in force for this weekend’s Iron Cowboy, presented by Ariat, the second PBR Major event of the year.

Currently ranked No. 38 in the world, Buttar is just 10 points behind the Top 35.

Out of competition last weekend, when Buttar last rode, he contributed an 86-point ride aboard Accelerator to Team Canada’s total at the PBR Global Cup USA at AT&T Stadium in Arlington, Texas.

The Kindersley, Saskatchewan-native will make his debut inside STAPLES Center after a strong finish at the 2018 PBR Iron Cowboy where he finished sixth to gain 30 world points.

In Round 1, Buttar will attempt William as the seventh man slated to ride at the first-ever PBR Unleash The Beast event in Los Angeles. From MG Bucking Bulls, William has no outs on record according to ProBullStats.com.

Joining Buttar in the draw will be fellow Canuck Byrne, presently ranked No. 33 in the world and 10 points in front of No. 35 Marcus Mast.

Much like Buttar, Byrne also last competed at the PBR Global Cup USA where his event was cut short when he sustained a concussion after bucking off Smooth Over in 4.76 seconds.

At the last edition of the Iron Cowboy, Byrne was shutout, bucked off by Lab Rat in 2.83 seconds.

In Round 1 of the 2019 Major event, Byrne will face Red Sails in the Sunset. One of 24 bulls from Chad Berger making the journey to the Golden State, the bovine athlete has been ridden 21 times in 55 attempts.

A progressive-elimination format competition, each of the Top 35 bull riders on the PBR Unleash The Beast, in addition to four Velocity Tour and one Hispanic invite, will attempt one bull each in Round 1, aiming to make the 8-second buzzer.

If a rider successfully covers his bull, he will advance to the next round. If he gets bucked off, he is finished. The Major is a minimum of two rounds and a maximum of five, with at least 25 riders advancing to Round 2.

The Iron Cowboy will earn a minimum of $100,000 and 625 points toward the world standings. The rider who records the highest marked ride will also receive a $26,000 bonus.

CBS Sports Network will broadcast all the action from Championship Saturday on Saturday, February 23 at 10:30 p.m. ET. CBS Sports will then televise the final rounds at 12:00 p.m. ET on Sunday, February 24.

Fans will be able to watch the action in its entirety live via PBR’s new streaming digital platform RidePass. Round 1 will be exclusively seen on the platform, with coverage beginning at 10:30pm ET on Friday, February 22. The listen LIVE stream of the final rounds will begin on Saturday, February 23 at 9:45 p.m. ET.