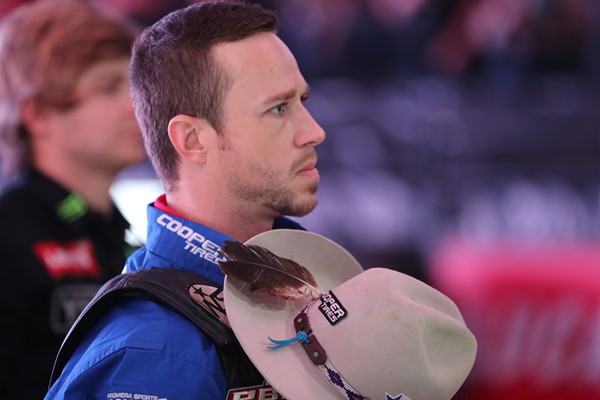 Cody Nance is now No. 30 in the world after his win on the Canadian Touring Pro Division in Lloydminster, Saskatchewan. Photo: Andy Watson/Bull Stock Media.

NEW YORK CITY – In mid-March, Cody Nance’s season came to a screeching halt when he posteriorly dislocated his hip in Kansas City.

Relegated to the sidelines for eight weeks while he recovered, the Tennessee cowboy slowly slid down the world rankings, falling from No. 20 prior to the Kansas City event, to No. 32 as he made his triumphant return in May at the Ty Murray Invitational in Albuquerque.

“It feels good,” Nance said of his hip. “I had to stay off of it for four weeks, no weight, and then I could put like 30 pounds on it, and then 60 pounds. So I just progressively got better and thank god for that.”

When Nance returned, however, he didn’t pick up where he left off.

After heading into Kansas City with three Top-10 efforts at his back, it took Nance six events before he returned to the point-earning positions on the leaderboard.

But his momentum has shifted with the summer run, with his return to the top of the world rankings gaining notable steam compliments of his victory on Canadian soil in Lloydminster, Saskatchewan.

“Yeah very much needed,” Nance said of his win.

“Earlier this year, I dislocated my hip, so it cost me a chance to get some points there and that’s kind of my goal this summer, is just to try to make up some ground, so that’s a pretty good start!”

To begin the Friday night event, Nance first rode Midnight Flyer for 81 points in Round 1.

He then brought the raucous crowd to its feet when he made the 8 aboard OMB Legal Issues for an event best 88.5 points in the championship round.

“He was a really cool bull,” Nance said of his final draw. “They said he hadn’t been rode a whole bunch. He turned back into my hand and had a lot of air. It was a really good draw, really good bull to have.

“My long round bull, he’s been dusting a bunch of the kids at the high school rodeos, so they didn’t know what he was going to do. I needed a bull that good in the short round to get me a high enough score because I was only 81 in the first round, so it worked out good.”

Earning 60 world points for the win, Nance rose four positions in the world standings, now No. 30.

With the elite Unleash The Beast preparing to return on July 22-23 at the iconic Cheyenne Frontier Days for the third Major of the season, Last Cowboy Standing, Nance is now 82.5 points in front of the dreaded cut line into the Top 35.

The win in Canada came during a multi-week stink in the Great White North for Nance.

Riding at the three-day Touring Pro Division at Ranchman’s leading into the Calgary Stampede, where he finished 20th, Nance also rode in Kinsella, Alberta before capping his trip abroad with his entry in Lloydminster.

During his trip, the Yin and Yang friendship with Canadian Dakota Buttar reemerged.

RELATED: Nance and Buttar Succeeding as Yin and Yang Duo

“He would message me every night and tell me, ‘oh you got a good one tonight, oh you got a round winner,’ and he called that one for sure,” Nance said.

“But he knows a lot of them bulls, he’s pretty smart when it comes to those bulls and knowing which ones will fit you. I guess when you see them enough, you learn them, but I don’t pay attention that close, I just get on and go.”

With his Canadian trip now in the rearview mirror, before the Cheyenne event in just five short days, Nance hopes to gain even more ground in the world title race.

And while he was shut out on the Touring Pro Division on Monday-Tuesday in Jackson Hole, Wyoming, Nance has two more stop on his docket before heading back to the Cowboy State.

“From here we’re going to go down to Grand Junction, Salt Lake City and then I’m going to Cheyenne, and then we’ve got Big Sky,” Nance detailed of his upcoming travels. “Pretty good run. And then we’ll go down and train in Colorado, they opened that facility the PBR built with a training center, so I’m going to check that out.”

Looking even further forward, Nance is eager for the final Unleash The Beast Major of the year, which is practically in his backyard. On Aug. 24-25 the premier series will invade Nashville for the 21st year with the Jack Daniels Music City Knockout, presented by Cooper Tires.

“It’s always nice to be close to home,” Nance said. “I still don’t sleep in my own bed because it’s two hours away, but it’s just right down the road, it’s easy.”