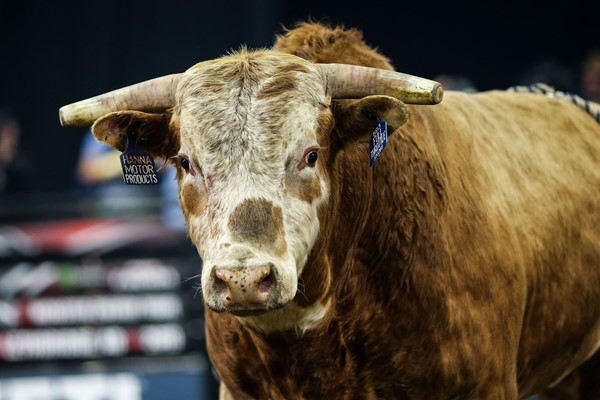 PBR Canada's premier Monster Energy Tour will make its third stop of the weekend this year in Calgary, Alberta with the Calgary Classic. Photo: Covy Moore/CovyMoore.com.

WELCOME TO CALGARY – This weekend, for the third time in tour history, PBR Canada’s Monster Energy Tour will travel to Calgary, Alberta for the Calgary Classic at the Nutrien Western Event Centre. The event begins on Friday, March 22 at 7:30 p.m. MDT and concludes on Saturday, March 23 at 7:30 p.m. MDT. The event is one of only three two-day events on the 10-stop, 2019 Monster Energy Tour. The first was held at the start of the month in Lethbridge, Alberta, while the last will be the PBR Monster Energy Canadian Finals in Saskatoon, Saskatchewan on Nov. 22-23.

With the increased points available, the stakes are raised for the Calgary event, with eight riders in position to possibly earn a berth or alternate position to next weekend’s Unleash The Beast event in Tacoma, Washington. For the quartet of Tanner Byrne, Jared Parsonage, Shay Marks and Garrett Green, an event win would mean climbing into the Top 35 and a possible position next weekend on the elite tour:

Parsonage is currently No. 47 and would rise to No. 23

Garrett Green is currently No. 67 and would rise to No. 33

For another four riders, Jackson Scott, Dayton Johnston, Todd Chotowetz and Jordan Hansen, the world points earned for the win would put them all within 65 points of the Top 35.

CHALLENGE OF CHAMPIONS – Following the first round of the Calgary event, fans will witness the Challenge of Champions. In the special out, the top-ranked rider from Round 1 will get the opportunity to attempted reigning PBR Canada Bull of the Year Happy Camper for the chance at $2,500. Fans first saw this at the beginning of March at the Monster Energy Tour event in Lethbridge. At the stop, Round 1 winner Cody Casper was bested in 2.21 seconds by Happy Camper.

THE ROOKIE RETURNS – After a year-long recovery for a broken humerus and dislocated shoulder, 2017 PBR Canada Rookie of the Year Coy Robbins will make his return to competition this weekend in Calgary. At the 2017 PBR Monster Energy Canadian Finals in Saskatoon he was named the PBR Canada Rookie of the Year, finishing No. 20 in the national standings, and edging fellow rookie contender Dayton Johnston by 245 points. Sustaining the injury in April 2018 at the Canadian Pro Rodeo Association’s (CPRA) event in Red Deer, Robbins was last seen in PBR competition in February of that year at the Youngstown, Ohio Velocity Tour even on Feb. 9. In Round 1, he’ll attempt Time Well Spent.

MARCOS RIDES AGAIN – For the first time since the 2018 PBR Monster Energy Canadian Finals in November, Marcos Gloria will return to action. After making history last season as the first rider in league history to win multiple events on the PBR Canada Monster Energy Tour, victorious in back-to-back weekends at the Iron Cowboy international Major in Quebec, and first-ever stop in Halifax, Nova Scotia, his bid to become the year’s PBR Canada Champion came to an end when he fractured his clavicle in Round 2 of the finals attempting Morning Wish. Out of action since, he’ll attempt Spooky Lukie in Round 1.

HOME-PROVINCE FAVORITES – This weekend, 15 of the 22 entered Canadians will be competing in front of a home province crowd: Logan Biever (Claresholm), Wacey Finkbeiner (Ponoka), Riley Gagnon (Innisfail), Wyatt Gleeson (Sundre), Garrett Green (Meeting Creek), Jordan Hansen (Okotoks), Ron Hunt, (Nanton), Dayton Johnston (Milk River), Klayton Lakevold (Provost), Zane Lambert (Ponoka), Wyatt Laughlin (Lundbreck), Shay Marks (Sunny Brook), Mike Ostashek (Edson), Coy Robbins (Camrose) and Cole Young (Fairview). Among the contingent, Hansen, Hunt and Gagnon will be riding less than one hour from home, while Biever, Gleeson, Finkbeiner, Lambert and Laughlin are all less than a two-hour drive from Calgary. Last year in Calgary, Lambert was the top-finisher of the home-province riders that is also set to compete this year. After a Round 1-winning 86-point ride on The Silence in Round 1, Lambert rode his way to a third-place finish. Also recording qualified rides at the event were Biever who finished ninth and Hunt who was close behind in tenth.

PARSONAGE WINS LETHBRIDGE – At the first-ever PBR Canada Monster Energy Tour event in Lethbridge, Jared Parsonage became just the second rider in tour history to win multiple events on the nation’s premier series. Victorious on the tour last October in Abbotsford, British Columbia, the Maple Creek, Saskatchewan-man won the Bridge City Chrysler/LA Towing PBR Challenge as the lone rider to go a perfect 3-for-3. For the victory, Parsonage netted 535 Canadian national points and surged to the No. 1 ranking in the national standings, leading then No. 2 Shay Marks by 90.83 points. At the most recent PBR Canada event, a Touring Pro Division event in Teepee Creek, Alberta, Parsonage further extended his lead atop the standings when he finished fifth to collect 85 Canadian national points. Heading into this weekend’s Calgary Classic he leads Marks, who won the season-launch Monster Energy Tour even in Winnipeg, Manitoba, by 175.83 points. Parsonage will attempt Southern Bend in Round 1.

VENTURING SOUTH – Since the last Canadian Monster Energy Tour event in Lethbridge, Canuck riders Shay Marks and Logan Biever have traveled stateside in search of crucial world points on the Pendleton Whisky Velocity Tour. During last weekend’s double event weekend for the Velocity Tour, Marks competed at the two-day event in Wheeling, West Virginia, while Johnston traveled to Dayton, Ohio for the one-day stop in the Buckeye State. Despite neither rider able to make the 8-second whistle, each has had success south of the border in 2019. Marks has ridden at four Velocity Tour events thus far, finishing 17th in Knoxville and seventh in Worcester, Massachusetts. Biever has made two trips to the United States, recording a 15th-place finish on the Touring Pro Division in New Town, North Dakota. Heading into this weekend’s event in Calgary, Marks is No. 2 in the national standings, 175.83 points behind No. 1 Jared Parsonage, while Biever is No. 9, 573.33 points behind the top spot.

CHOTOWETZ GAINS MOMENTUM – At the most recent PBR Canada event, the Touring Pro Division’s Teepee Creek PBR Classic, presented by Lyons Production Services, Todd Chotowetz surged to new heights. As one of three riders to deliver a flawless 2-for-2 effort, Chotowetz earned the second PBR event win of his career, previously victorious in Falher, Alberta in June 2018. The win earned Chotowetz 320 Canadian points propelling him to a career-high No. 6 in the national standings, trailing No. 1 Jared Parsonage by 438.33 points. Contextually, When the Saskatchewan bull rider began his career in 2012, he finished No. 81 in the PBR Canada Standings. Fast forward four years, and since 2016, when he finished No. 42 in the nation, he has been steadily on the rise, finishing No. 38 in 2017 and No. 21 last season. Thus far in 2019, Chotowetz has ridden at four Canadian events, also earning national points for his eighth-place finish in Dawson Creek, British Columbia. In Round he’ll face Buck Nasty as the first rider slated to leave the chutes.

BACK ON HOME SOIL – Much like riders Shay Marks and Logan Biever, bullfighter Brett Monea has also been active in the United States, protecting the riders of the PBR numerous weekends on the Pendleton Whisky Velocity Tour. Monea, who has been selected to work the PBR Canada Finals seven times in his career, has worked eight events thus far in 2019 on the Velocity Tour, last appearing at the Dayton Rumble on March 16.

PREVIOUSLY IN CALGARY – At last season’s historic event in Calgary, home-province favorite Brock Radford wowed the sold-out crowd with a perfect 2-for-2 showing to capture his first victory on the PBR Canada Monster Energy Tour. The victory at the season-launch event propelled Radford to the top of the national standings, then leading two-time PBR Canada Champion Zane Lambert by more than 500 points. Once again a top contender for the national title come season’s end, Radford fell heartbreakingly close of capturing his first national title, finishing No. 2 for the second consecutive year. At this season’s Calgary Classic, Radford will be unable to defend his event title, currently sidelined as he continues to recover from knee surgery.

ABBI CLASSIC ROUND – For the first time this season, the Monster Energy Tour will include an ABBI Classic round. To be eligible to compete in any ABBI produced or sanctioned Classic event, bulls must be at least three years of age, but no older than four. A total of 27 of the top up-and-coming bovine athletes in the nation will buck both Friday and Saturday as part of the ABBI Canada Classic. Money is paid out on the aggregate over both days as well as in each round.

BULL PEN – This weekend, reigning PBR Canada Bull of the Year Happy Camper will look to defend his Bull of the Event title earned at last year’s event in Calgary, marked 43.5 points for his 4.44-second buckoff of Jake Gardner in Round 1. From Magrath’s Two Bit Bucking Bulls, Happy Camper made his season debut at the Lethbridge event where he showed fans he would once again be a contender for this year’s top bull, earning the bull of the event award for his 3.22-second buckoff of Jake Lockwood which was marked 44.5 points.

NEXT UP – PBR Canada’s Monster Energy Tour will next travel to Québec, Québec and the Videotron Centre for the Iron Cowboy, PBR’s lone international Major event. The event is the first of the four-stop slate of events in the Eastern provinces and will get underway on Saturday, May 4 at 7:00 p.m. ET.

PROVIDING PROTECTION – The bullfighters on hand for this weekend’s event in Calgary are Greg Loring Jr., Brett Monea and Ty Prescott.

RIDEPASS COVERAGE – Fans will be able to watch the action in its entirety live via PBR’s new streaming digital platform RidePass. Coverage of the Calgary Classic will begin at 9:30 p.m. ET on both Friday, March 22 and Saturday, March 23.