Canada a Land of Milestones for Jake Lockwood 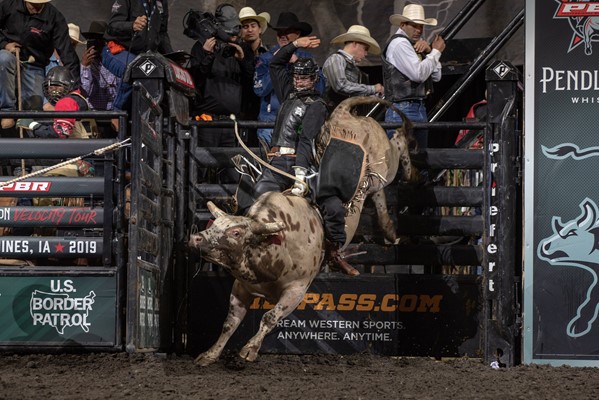 Jake Lockwood went a perfect 2-for-2 to win the first event of his career in Nipawin. Photo: Andre Silva/Bull Stock Media.

And for 19-year-old Jake Lockwood, both of those moments came on Canadian soil.

After the up-and-coming Montana-man made his league debut in March 2018 at the Canadian Monster Energy Tour stop in Calgary, Lockwood earned his first event win on May 10 in Nipawin, Saskatchewan.

“It took a little bit, but I couldn’t be any happier,” Lockwood said of the win.

Since his fifth place effort in Calgary in March 2018, Lockwood competed at 42 events before he found himself hoisting the stop’s buckle come event’s end. In the 14-month span from his debut until his victory, Lockwood’s accomplishments included five Top-5 and nine Top-10 finishes in Canada on the Monster Energy Tour and Touring Pro Division, and stateside on the Pendleton Whisky Velocity Tour and Touring Pro Division.

His march to victory in Nipawin began after earning a re-ride following his trip aboard Gordy Blue.

“He turned back right in the chute and wrecked me out pretty good,” Lockwood explained. “It wasn’t looking too promising.”

Standing between him and advancing to the championship round was Skori Bucking Bulls’ Smash.

“Shoot, you can’t ask for a nicer one in the long round,” Lockwood said.

Reaching the 8-second whistle, Lockwood earned an 85.5-point score, the top marks in Round 1.

Leading the aggregate, Lockwood had yet another “perfect,” draw in Finning Lil Shorty from Flying Four Bucking Bulls in the final round.

“Once again, couldn’t ask for a nicer one in the short round,” Lockwood said as he reflected.

Lockwood once again recorded the top score in the round, marked 88 points, leading runner-up Jared Parsonage, the only other rider to go a perfect 2-for-2, by five points in the event aggregate at the conclusion of the stop inside the Nipawin Centennial Arena.

On hand to witness Lockwood’s win was a sold-out crowd that was brought to its feet when he hit the 8-second whistle in the championship round and captured the event win.

“They packed it in there,” he said. “It was the same deal last year. We went up there, and just that old hockey building, or whatever, and they pack them in there, it’s cool.”

With plans to compete at the intense slate of summer events in Canada, Lockwood’s goals are simple.

“I usually don’t set goals for the whole year,” he explained. “I just go to each event and try to ride my bulls and try to win it. So just little goals like that.

Lockwood hopes that with that approach, he will reach yet another milestone, his debut on the premier Unleash The Beast.

“We’re always shooting for that,” he explained. “If I ride my bulls the rest will take care of itself and we’ll be there.”

And in his corner is none other than brother, and 2017 PBR World Champion Jess Lockwood.

“He’s always there,” Lockwood said of his older brother. “Whether I do good or not, he’s always going to help me critique my rides and get that much better.”