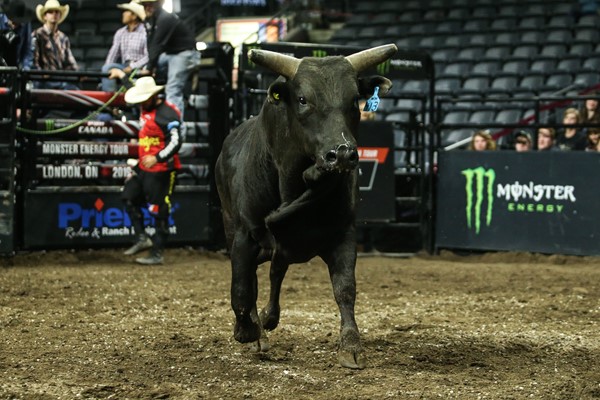 PBR Canada will make the league's second-ever trip to Moncton on May 25. Photo: Covy Moore/CovyMoore.com.

WELCOME TO MONCTON – This weekend, for the second time in league history, PBR Canada will buck into Moncton, New Brunswick, with the Moncton Classic, presented by GO! Store. While the event will mark the league’s second trip to the New Brunswick city, it will be the first time inside the brand-new, state-of-the-art Avenir Centre. Action gets underway on Saturday, May 25 at 7:00 p.m. ADT.

THIS WEEKEND’S FORMAT –This weekend’s Monster Energy Tour event in Moncton will feature a field of 16 riders, all competing in two rounds, with the Top 10 advancing to the championship round where the event winner will be crowned. To begin the night, all entered riders will attempt one bull each in Round 1 and Round 2. The Top 10 based on the combined score from those two rounds will then advance to the championship round where they will attempt one final bull in an effort to win the event title, their share of the purse along with crucial world and Canadian points. Specific to the Canadian standings, a rider has the chance to earn augmented national points compared to a traditionally formatted, one-day Monster Energy Tour event. Compared to an event with two rounds, where a rider could earn a maximum 550 Canadian points, one rider has the chance to leave Moncton with 700 Canadian points.

I SPY THE TOP 35 – This year the PBR’s Executive Competition Committee (ECC) approved a revised PBR world points system pertaining to the Velocity Tour and International Tour events for the 2019 season and beyond. International Cup events in Australia, Brazil, Canada and Mexico will now award 170 world points to the winner.

With the increased points available, the stakes are raised for the Moncton event, with five riders in position to possibly earn a berth or alternate position to next weekend’s Unleash The Beast event in Green Bay, Wisconsin. For Michael Lane an event win would mean climbing into the Top 35, rising from No. 44 to No. 35.

For the remaining four riders, Shay Marks, Tanner Byrne, Cody Casper and Zane Lambert, the world points earned for the win would put them all within 170 points of the Top 35.

THE CEO OF THE OUTLAW NATION COMES NORTH– After mounting arguably one of the most monumental comebacks in league history, returning 74 days after breaking 30 facial bones to nearly win the 2018 PBR World Finals and finish the season No. 16 in the world, Chase Outlaw is currently one of the top contenders for the 2019 PBR World Championship. Dubbed by USA Today as the “toughest athlete in sports,” the “CEO of Outlaw Nation” is currently No. 2 in the world, 489.16 points behind current world No. 1 Jose Vitor Leme. Set to ride in Moncton, should Outlaw win, he would close the gap to 319.16 points. The event will mark the Arkansas cowboy’s second event on Canadian soil in 2019, shutout on May 4 at the Canadian Iron Cowboy in Quebec. Throughout his career, Outlaw has found a second home in Canada competing at nearly 30 events.

CLIMBING THE RANKS – While Chase Outlaw will compete in Moncton as the top-ranked rider from the draw in the world standings, currently No. 2, two other riders from the Top 35 will also travel to New Brunswick in search of crucial world points to climb the standings during the Unleash The Beast break. Ranked No. 13, Matt Triplett would climb to No. 10 with a win, while Daylon Swearingen, who won the most recent Monster Energy Tour event in London, would rise from No. 28 to No. 18.

MARKS EYES NO. 1 – After ascending to the No. 1 ranking in Canada following his event win at the season-launch event in Winnipeg, Shay Marks has been on a mission to reclaim the top spot after he was surpassed by Jared Parsonage in early March. This weekend, with No. 1 Parsonage and No. 2 Jordan Hansen not slated to compete, Marks has the opportunity to reclaim the No. 1 ranking, and should we sweep the event and all round victories, he would overtake Parsonage by 500 points. After earning no points for his sixth-place finish at the International Major in Quebec, the Alberta rider garnered 200 points for his runner-up finish at the most recent Monster Energy Tour stop in London. The finish, highlighted by an 83.5-point ride on Applause, allowed Marks to climb from No. 4 to No. 3 in the nation. Two other riders are also in a position to ascend to the nation’s No. 1 ranking. Should they earn the maximum 700 Canadian points, No. 4 Daylon Swearingen would rise 342.92 points ahead of current No. 1 Parsonage, while current No. 6 Lambert would catapult to 297.92 points in front of the top spot.

PREVIOUSLY IN MONCTON – Last season when PBR made its debut in Moncton, young gun Lonnie West wowed the sold-out crowd with a 2-for-3 showing to capture his second win on Canada’s elite Monster Energy Tour. After winning Round 1 with an 86-point score on Applause, West rebounded from a Round 2 buckoff to record his first qualified ride on Double Major in four attempts, covering him for 87 points in the championship round. The event also included a break-through performance from now 19-year-old Daylon Swearingen who finished second. The New York cowboy’s runner-up effort was highlighted by the top-marked ride of the event, reaching the 8 on Pound Sand for 88.5 points in the championship round.

FAMILIAR WATERS – During Rounds 1 and 2 of this weekend’s Moncton Classic, fans will witness four rematches. In the opening round, Lonnie West will be the lone rider facing a familiar foe, set to square off against Big Tymer. The two first met at the most recent stop in London when West earned his first re-ride aboard the bovine athlete. In Round 2, Matt Triplett, Tanner Byrne and Zane Lambert will all meet bovine athletes that have attempted previously. For Montana’s Triplett, he first attempted Hookasaurus last season in Halifax when the bull bested him in 2.71 seconds for a 42-point score. While Byrne has seen Uptown Funk twice, earning a re-ride in their most recent meeting during the 2018 PBR Canada Finals, the bovine athlete bested him in 4 seconds for a 42-point score in their first meeting at the Manor, Saskatchewan Touring Pro Division event in 2017. Rounding out the contingent of cowboys facing past draws is Lambert and Flash Forward. With one out on record between the two, Flash Forward sent the two-time Canadian Champion to the dirt in 4.07 seconds to earn a 40.5-point bull score during the first night of Touring Pro Division action from Ranchman’s in Calgary in 2017.

BULL PEN – With reigning PBR Canada Bull of the Year Happy Camper staying home for the eastern swing of this season’s Monster Energy Tour, Ripped at the Seams, One for the Money and Twist of Barbwire have the chance to tie him for most bull of the event honors thus far in 2019. Happy Camper leads PBR Canada with two event titles, recording his high scores in back-to-back events in Lethbridge and Calgary. Of Vold Rodeo, Ripped at the Seams earned his top marks at the season-launch event in Winnipeg, marked 43.5 points for his 1.77 seconds buckoff of Cody Casper. Slated to buck in the championship round, the bull who calls Ponoka, Alberta home has delivered matching 43-point outs in his two trips while in the Eastern portion of Canada. First bucking off Keyshawn Whitehorse in Quebec, Ripped at the Seams most recently sent Adam Hinkley to the dirt shy of the 8-second whistle in London. Also from the Vold Rodeo outfit, One for the Money was the top bull in Quebec, marked 44 points when Derek Kolbaba successfully rode him for an 88-point score to be crowned the 2019 Canadian Iron Cowboy. In his most recent trip, One for the Money was marked 43.5 points for his 5.57-second trip with Carlos Garcia. The trio of bulls is completed by the most recent bovine athlete to record an event’s top score, Twist of Barbwire from Thompson Rodeo Livestock. His high marks, 43.5 points, were earned in London for his quick 3.64-second trip with Luis Blanco.

NEXT UP – PBR Canada’s Monster Energy Tour will next travel to Halifax, Nova Scotia, and the Scotiabank Centre for the Halifax Toughest Cowboy Classic, presented by GO! Store. The event will be the fourth and final event in the Eastern provinces and will get underway on Saturday, June 1 at 7:00 p.m. ADT.

PROVIDING PROTECTION – The bullfighters on hand for this weekend’s event in Moncton Brett Monea and Ty Prescott.

BROADCAST COVERAGE – Fans will be able to watch the action in its entirety live via PBR’s new streaming digital platform RidePass. Coverage of the Moncton Classic, presented by GO! Store, will begin at 8:00 p.m. EDT on Saturday, May 25. The event will also be broadcast on TSN2 on Tuesday, July 16 at 7:30 p.m. EDT.