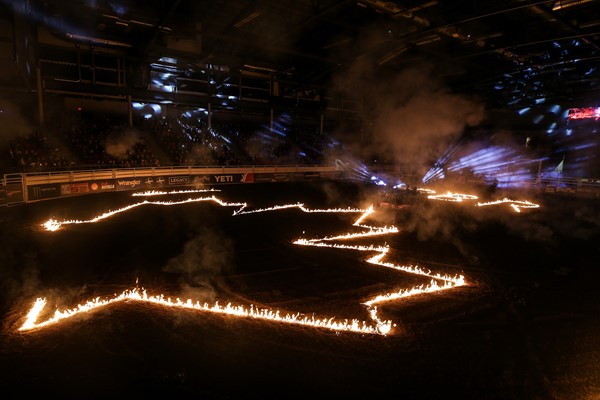 BIENVENUE AU QUEBEC– This weekend, for the third time in league history, PBR Canada will hold the season’s lone international major, bucking into Quebec City, Quebec and the Videotron Centre with the Canadian Iron Cowboy, presented by Super Sagamie. Action gets underway on Saturday, May 4 at 7:00 p.m. EDT.

THE FORMAT EXPLAINED– For the second consecutive year, the Canadian Iron Cowboy will feature a progressive elimination format. All entered riders will attempt one bull in Round 1 with the Top 8 advancing to the second round. Following Round 2, the Top 4 riders in the aggregate will advance to Round 3, with the Top 2 in the aggregate moving on to the fourth and final round. Through these four rounds, if at any point fewer qualified rides are recorded than positions open, the remaining slots will be filled on buckoff time. The fourth and final round will pit two cowboys head-to-head in a winner take all showdown with the rider who records the top score in that round crowned the Canadian Iron Cowboy. Should neither of the advancing riders record a qualified ride, the winner will be the rider with the highest aggregate score.

NOW TELL ME ABOUT THE POINTS (AND MONEY) – As a PBR Major, the 20 cowboys set to ride this weekend inside the Videotron Centre will be competing for both an increased payout and world points, with one rider having the opportunity to leave with $46,000 and a whopping 370 world points.

World points will be awarded in a similar manner, with the round points only given if a rider records an 8-second effort in that specific round. The Top 8 will each receive 10 points, while the Top 4 will net 20 each and the Top 2 will collect 40 each.

For their overall event finish, the winner will receive 300 world points, and the runner-up will take home 120 world points.

In addition to world points, riders will also collect points towards the Canadian national standings, set to be awarded in a similar schedule. In Rounds 2-4, all advancing have the opportunity to earn national standings points provided they reach the whistle. Each round winner will collect 100 national points, with the remaining positions set to earn the following: 2nd – 60; 3rd – 50; 4th – 40; 5th – 30; 6th – 15; 7th – 10; 8th – 5. For their overall event finish, each of the Top 4 riders will collect 140 Canadian points, while the runner-up will take home an addition 240 points and the winner netting 500. Specific to the national points, one rider has the opportunity to net a total of 700 Canadian points, which will have a significant impact on the standings.

OUTLAW AIMS FOR WORLD NO. 1 – With 20 riders slated to compete in Quebec, the field will once again be split, comprised of 10 Canadians and 10 of the top international athletes from the world standings. Leading the contingent from the world standings is No. 2 Chase Outlaw, who currently trails world No. 1 Jose Vitor Leme by a mere 214. 16 points. Thus far in 2019, the “CEO of the Outlaw Nation,” is amidst one of the best seasons of his career. After beginning the year with a win on the Touring Pro Division in New Town, North Dakota, the Outlaw gained fast world points at the season-launch for the elite PBR Unleash The Beast in New York City, finishing sixth. After a runner-up finish on the premier series the next weekend in Chicago, including his first 90-point ride of the season, the 26-year-old ascended to the No. 2 ranking in the world standings.

After recording two additional Top-10 finishes, Outlaw earned his first Unleash The Beast victory of 2019 in St. Louis at the Mason Lowe Memorial in mid-February. Less than a month later, Outlaw briefly sat atop the world standings following his second win of the season in late March in Kansas City, Missouri. Outlaw, dubbed by USA Today “the toughest athlete in sports” following his epic comeback from breaking 30 facial bones last July to nearly win PBR World Finals in Las Vegas in November, 2018, will enter the Québec event with momentum at his back, fresh off a sixth-place finish last weekend on the Unleash The Beast in Columbus, Ohio. The Arkansas cowboy is no stranger to competing in Canada nor Québec. Having ridden at more than 25 Canadian events, Outlaw finished fifth at the first-ever International Major event in Québec in 2017, covering Second Hand Crook for 87 points and Gucci Galore for 85 points.

WHITEHORSE MAKES CANADIAN DEBUT – This weekend, reigning PBR Rookie of the Year Keyshawn Whitehorse will make his Canadian debut when he rides at the Iron Cowboy International Major. Competing on the elite tour for the first full season of his young career in 2018, Whitehorse concluded the year No. 13 and was crowned the Rookie of the Year, an elite group which includes the likes of now two-time PBR World Champion J.B. Mauney, three-time PBR World Champion Silvano Alves, 2017 PBR World Champion Jess Lockwood, and reigning World Champion Kaique Pacheco. For Whitehorse, the season included six Top-10 finishes on the Unleash The Beast, capped with a 13th-place effort at the first PBR World Finals of his career. Currently No. 29 in the world, the Navajo bull rider has earned three Top-10 efforts on the Unleash The Beast this season, included a ninth-place finish last weekend in Columbus.

EGUCHI COMES NORTH – While he may not have won the coveted gold buckle and $1 million bonus, Marco Eguchi’s 2018 season ended on a high note in Las Vegas, with the Brazilian winning the 2018 PBR World Finals event title. Wowing the crowds throughout the five days of action in Sin City, the standout Brazilian concluded his sixth trip to the season-culminating event 5-for-6 to emerge victorious at the sport’s most prestigious event. After beginning the event ranked No.20 in the world, the 29-year-old surged to No. 5 in the world compliments of a victory backed by consecutive wins in Round 2 and Round 3.

Of those round victories, Eguchi’s electric 94-point trip in the second round aboard Spotted Demon earned the Lane Frost/Brent Thurman Award as the high-marked ride of the event. Thus far in 2019 Eguchi is ranked No. 26 in the world. He will ride into La Vieille Capitale with a Top-5 effort at his back, finishing fifth in Columbus. The effort was highlighted by his second round win of the season, recording the top marks in the championship round when he covered Losing My Religion for 89.5 points.

KOLBABA LOOKS FOR WIN NO. 2 – Derek Kolbaba is no stranger to success in Quebec, victorious at the inaugural event inside the Videotron Centre, winning both Round 1 with an 89.5-point score on Funky Junk and Round 2 with 87.5-point ride on Timebomb. His victory that season in Quebec also showed the significance these points can have on the world title race. Kolbaba earned 300 points in Quebec, which was the most points he earned all season at one event outside of his five Unleash The Beast event victories. The Walla Walla, Washington, bull rider finished second by 447.5 points to 2017 World Champion Jess Lockwood in the final world standings. When Kolbaba climbs aboard his Round 1 draw this season, he will be the lone international rider to have competed at all three editions of the event after going 0-for-1 in 2018. After a dismal start to the season, Kolbaba has caught a hot streak in the last few weeks of Unleash The Beast competition. After a fourth place finish in Billings in early April, Kolbaba also rode to a fourth-place effort last weekend in Columbus, and delivered a runner-up result in the 15/15 Bucking Battle, to gain 315 world points and rise from No. 15 to No. 11 in the world.

HOME-PROVINCE FAVORITE – Last season, Quebec’s own Zac Bourgeois made his PBR debut in Quebec, and will return this season in search of his first event win. A third generation cowboy, the now 19-year-old began his career when he was just 7 years old, winning 26 titles in the more than 10 years since.  Bourgeois has won six Canadian titles, notably winning the National High School Finals Rodeo in 2016, in addition to 14 Québec and five Ontario titles. Bourgeois also qualified for the National Junior High School Finals Rodeo in 2014. While he was unable to record a qualified ride last season in Quebec, Bourgeois returned to PBR action a few short weeks later in Moncton, New Brunswick, logging his first 8-second effort when he rode El Camino for 81 points to finish eighth overall.

HANSEN WINS CALGARY – At the last PBR Canada Monster Energy Tour event, in Calgary on March 22-23, a new rider ascended to the No.1 ranking in Canada compliments of his victory. Going a perfect 3-for-3, Jordan Hansen won the first Monster Energy Tour event of his career, earning $6,114.90 along with 575 Canadian and 170 world points. The points allowed him to rise from No. 5 to No. 1 in the standings, a position he maintained heading into this weekend’s stop in Quebec. While his lead has shrunk, he remains out front of No. 2 Jared Parsonage, also set to ride in Quebec, by 115 points.

PREVIOUSLY IN QUEBEC – At last season’s first-ever, progressive-elimination event in Quebec, Brazilian Marcos Gloria earned the first PBR event win of his career after covering Tykro Checkered Flag for 82.5 points. For the victory, not only did Gloria earn a check for $19,125, but he also earned a crucial 300 world points, propelling him from No. 98 to No. 31 in the world.

BULL PEN – For the second-consecutive year, the Eastern events for the Canadian Monster Energy Tour will feature a blend of bulls from the Western provinces, and Maryland’s Mark Reed. The Canadian pen will be comprised of four contractors, with Thompson Rodeo, Wild Hoggs Bucking Bulls, R-Saga Ranch and Vold Rodeo all supplying bovine athletes for the event. Last season in Quebec, Twisted from Vold Rodeo, recorded the top bull score of the entire season on Canadian soil, marked 46 points for his 2.15-second buckoff of Brock Radford.

NEXT UP – PBR Canada’s Monster Energy Tour will next travel to London, Ontario and Budweiser Gardens for the London Classic. The event is the second of the four-stop slate of events in the Eastern provinces and will get underway on Saturday, May 11 at 7:00 p.m. ET.

PROVIDING PROTECTION – The bullfighters on hand for this weekend’s event in Quebec City are Brett Monea, Ty Prescott and Dominic Roy.

BROADCAST COVERAGE – Fans will be able to watch the action in its entirety live via PBR’s new streaming digital platform RidePass. Coverage of the Canadian Iron Cowboy, presented by Super Sagamie will begin at 7:00 p.m. EDT on Saturday, May 4. The event will also be broadcast on TSN2 on Tuesday, July 2 at 7:30 p.m. EDT.