Robbins Breaks Through in Moncton 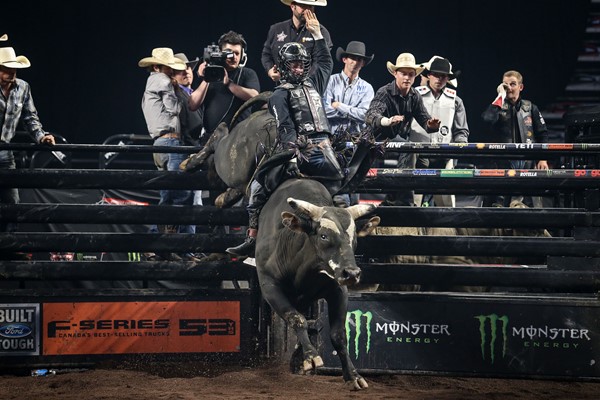 NEW YORK CITY – For 2017 PBR Canada Rookie of the Year Coy Robbins, his 2018 season didn’t play out as he planned. Sidelined for the majority of the year due to both a concussion and reconstructive shoulder surgery, the Camrose-native returned wide-eyed and hungry in 2019.

After last riding at a PBR event in Feb. 2018, Robbins made his return in late-march at the Monster Energy Tour stop in Calgary. Despite his eagerness, Robbins’ return did not feature instant success.

Prior to this weekend’s most recent Monster Energy Tour stop in Moncton, Robbins had entered five events, going 0-for-7.

But everything changed for the 19-year-old in the New Brunswick city.

In Round 1, Robbins heard the 8-second whistle for the first time in more than a year when he covered Act Naturally for 82.5 points.

While he bucked off his next two bovine athlete opponents, Hammer Down in 2.97 seconds, and Smoke Show in 4.17 seconds, Robbins concluded the stop fourth overall to net $1,334.15 and 145 Canadian points.

“You watch some guys and they just jump right back where they left off, and I would have liked to have done that, obviously, but I think, like I got to watching some videos and stuff, and Quebec especially, a big event with a lot of big time guys, I was putting a lot of pressure on myself, you know, and I was hungry, hungry to win, and I was using it all in the right way,” Robbins detailed.

“Instead of using it to fuel my fire, I was using it by putting pressure on myself, and I ended up riding incorrect and tight and just not my normal self.”

“He said just go back to the basics, and have some fun,” Robbins said. “I got on a good practice bull of Darren Eno’s he run in for me, and just got a little more confidence.

“Then rolled into Moncton here feeling good and you know a little confidence too, so rolled in, and got a score on the board, and just going to keep rolling with it.

Looking forward, Robbins has his sights set on making even bigger moves in the Canadian national standings. Previously unranked, Robbins is now No. 28 in the nation, 915.83 points behind No. 1 Jared Parsonage.

With a double-header on tap for this weekend with the two-day Touring Pro Division stop in Prince Albert, Saskatchewan for the Clunie-Cooper Memorial  PBR, followed by the Monster Energy Tour’s Halifax Toughest Cowboy in Nova Scotia, Robbins is returning to his winning form in the nick of time.

“Now is the time to put the push on and start winning,” Robbins said. “I mean so much money to be had up here in Canada nowadays, plus me and Lonnie [West] are hitting some pro rodeos as well, so it will be good to get some winning in the truck and just have some fun.”

PBR Canada Touring Pro Division action resumes this weekend with the Clunie-Cooper Memorial PBR on Thursday, May 30 and Friday, May 31 with action getting underway at 7:00 p.m. CST both nights at the Art Hauser Centre.