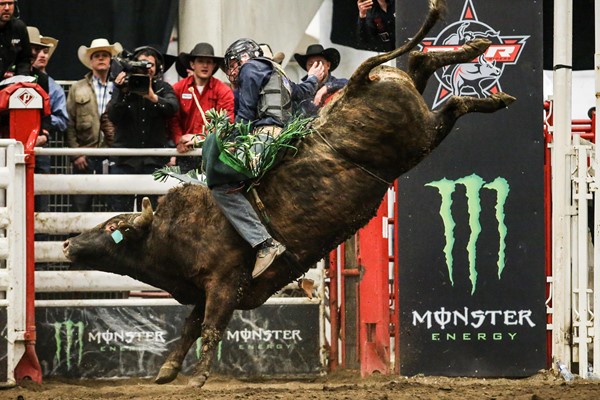 Twist of Barbwire earned his first bull of the event honors of the 2019 season at the most recent event in London, Ontario. Photo: Covy Moore/CovyMoore.com.

CALGARY, Alberta – A trailer load of bucking bulls from Western Canada has made the trip east for PBR Canada’s Monster Energy Tour three of the past four years.

Travelling to places like Québec, Québec; Ottawa and London, Ontario; Moncton, New Brunswick and Halifax, Nova Scotia is new for many, but what’s better than travelling your own country to show off your culture, and culture that’s ben enjoyed by thousands the past four seasons?

“Land on the ground and look at Old Québec then go down and flank bulls,” said New Sarepta, Alberta contractor Jim Thompson, the owner of Twist of Barbwire, of his first trip to Québec. “Does it get any better than that?”

It’s even better when the star of his pen is performing at a high level.

“He really bucked,” Thompson said of Twist of Barbwire. “I wanted to send him last year, but I sent him to in the states and he was in Greenville, South Carolina and wasn’t back in time.”

At six years old, Twist of Barbwire is a veteran in the bull pen.

“He’s went everywhere with us,” Thompson said. “He’s kinda the mainstay now, so he makes it work.”

Like other PBR bucking bulls, breeding is an important factor and this one has special meaning to Thompson.

“He is out of Dealin’ Dirty which is a Page bull I bought at one of their sales, a Crosswired bull. His mom is a Little White Lie out of Baby Shakes from Howie,” Thompson said of his father, Howard Thompson. “It’s kinda one of the original ‘back in the day’ breeding of Dad’s.

“When Baby Shakes got old I bred a handful of cows, he sent them to me, I bred and I ended up with four or five cows. I got Twist of Barbwire outta one and Livin After Midnight is out of a Baby Shakes cow.”

Speaking of Livin’ After Midnight, some of Thompson’s bulls are known for a certain trait.

“Everybody says my bulls are mean,” Thompson said. “Well, I think this may be the first bull when he gets older that you might be able to pat.”

With Twist of Barbwire bucking off all but three bull riders in 19 PBR career outs thus far, Thompson is enjoying the trips out east.

“That’s a big deal,” he said. “A little hard to follow in Québec with the announcers doing it in French, but I heard Kolbaba a few times and I knew where they were going.”

With nearly his entire life spent in the rodeo and bull riding world in Western Canada, it was a treat to see a crowd like Québec’s inside the Videotron Centre.

“They are fantastic, that many people in Canada into a bull riding?” Thompson said in awe. “Derek [Adams] made the right comment he said: ‘How many years ago we were both standing in Barrhead at the Wildrose Finals thinking that was a big deal, and now me and him we’re both in Québec.’ Probably one of the biggest bull ridings in Canada.

“That was pretty neat.”