Consistency Key for 2019 PBR Canada Bull of the Year Homegrown 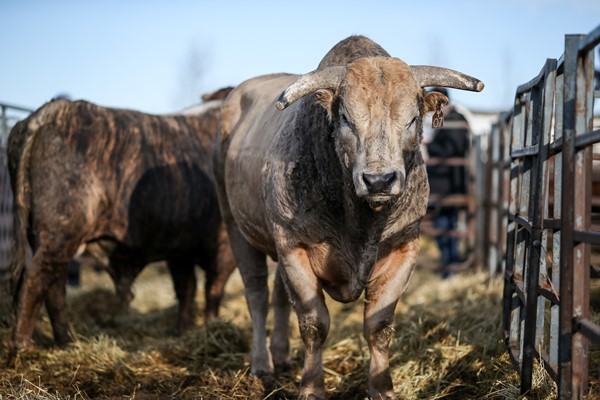 And the bull’s consistency proved key en route to capturing the season’s PBR Canada Bull of the Year honor.

For the first time in league history, the honor annually presented to the nation’s top bull was awarded based on a bovine’s Top 5 trips on Canadian soil during the regular-season and best out at the 2019 PBR Monster Energy Canadian Finals, presented by Dakota Dunes Casino, as opposed to a rider vote.

Homegrown concluded the regular-season atop the standings with a 44.5-point average, 0.4 points in front of Uptown Funk and 2018 PBR Canada Bull of the Year Happy Camper who tied for second.

Marked 43.5 points for his 2-second buckoff of two-time PBR Canada Champion Zane Lambert in the championship round, Homegrown was able to hold off a hard-bucking Happy Camper at the fiercely contested PBR Canada Finals.

Scored 45 points for his 3.48-second trip against Thor Hoefer II, Happy Camper was able to inch within 0.083 points of Homegrown, but was unable to overcome the Eno Bucking Bulls athlete’s dominant regular season.

“He’s a steady Eddy,” Eno said. “That’s him. If you take all his trips and you look at him, they’re all pretty close.”

Looking back on 2019, two of Homegrown’s trips, which proved integral in his march to the title, were career-bests for the bull. Twice marked 45 points, he first recorded the score in Falher, Alberta in June when he dispatched Logan Biver  in 5.47 seconds, only to earn it again in August at the Glen Keeley Memorial PBR in Stavely, Alberta when he bested Nick Tetz in 3.99 seconds.

Homegrown’s Top 5 scores were rounded out by matching 44.5-point efforts in Nipawin (Tanner Byrne in 2.94 seconds) and Marwayne (Lonnie West in 3.09 seconds), along with one of his 43.5-point scores which he registered four times during the regular-season in 2019 (Coronation, Elnora, Prince Albert and Brooks).

While he may have been a top bucker in 2019, when Eno first acquired Homegrown, he didn’t initially see the bovine’s natural talents that led him to make the purchase. Raised by Austin Beasley, the bull was traded to Nevada and Jay Nelson before he came to be owned by the Eno Family.

“I never really actually looked at the bull, other than I saw him buck a couple times and thought he looked pretty good,” Eno said of his path to owning Homegrown. “Then he got delivered up to the house and the first few trips I had him I thought I had just a spinner.”

His doubts however, were quickly erased.

“But then I was talking to Jay and kind of figured a little stuff out,” Eno continued. “He goes by himself at my house, he doesn’t go with general population. If something doesn’t get along with him, it gets moved. So he’s in a big pen with just one other bull.”

As head-turning as Homegrown’s season in 2019 may be, how he came to his current name elicits an equally quick smile.

While the world may know now the prominent Canadian bucker as Homegrown, for Canadian fans they first knew him as Spuds.

“They called him Spuds because [Austin’s] neighbor sold potatoes,” Eno recalled. “Well the reject potatoes, every once in a while, he’d come and dump a load off at his house. After he did the trade [with Nevada], [she] wanted a picture, so he said he went out to get a picture, and this calf was out, and he was standing over at the potatoes and he’s eating the potatoes.

“He got a picture, and [the calf] turned and looked at him with a potato in his mouth. So that’s how he came up with the name Spuds. But then I changed it because the first couple of events I went to, he kept coming up TNT Bucking Bulls, so I just changed the name. And that’s how I come up with Homegrown, because homegrown potatoes.”